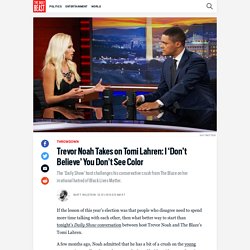 If the lesson of this year’s election was that people who disagree need to spend more time talking with each other, then what better way to start than tonight’s Daily Show conversation between host Trevor Noah and The Blaze’s Tomi Lahren. A few months ago, Noah admitted that he has a bit of a crush on the young conservative pundit, who made a name for herself with a video screed against Colin Kaepernick that went seriously viral on Facebook. “That is the least-woke, most awake person I have ever seen,” he said in the segment.

Trevor Noah’s first great moment: A brilliant “Daily Show” segment that rivals the best of John Oliver. Flint, Michigan, isn’t the only place in the United States where people are being subjected to an obscene amount of dangerous pollution. 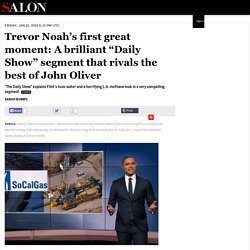 According to Thursday’s “Daily Show,” the neighborhood of Porta Ranch in Los Angeles has become so toxic due to a company’s methane leak that it is the equivalent of 7 million cars driving through. The leak is so bad it has become the single worst climate polluter in California, which is amazing, Noah said, because he knows for certain there is a lot of smoke being blown up people’s asses in Hollywood. 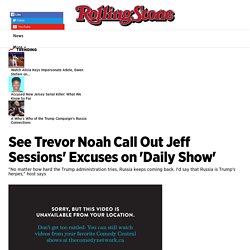 "No matter how hard the Trump administration tries, Russia keeps coming back. I'd say that Russia is Trump's herpes," Noah said. "Every time we dig deeper into Trump's campaign, it seems like there's a new person that's connected to the Russians. First it was Paul Manafort, then it was Flynn, the whole thing is like one of those Russian nesting dolls… Now it's Sessions. " Sessions has come under fire after it was revealed that, during Trump's campaign, he met with a prominent Russian ambassador on a number of occasions, even though Sessions subsequently denied any meetings took place while under oath during his confirmation hearings.