Worms found to share "memories" by swapping RNA to warn of danger. Sharing information is crucial for species to survive, but how do simple lifeforms like worms spread the word? 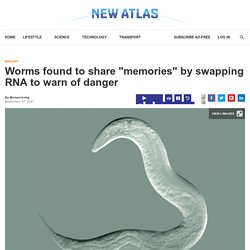 Nutrition researchers urge update to lab animal diets. The pile of beige food pellets in a lab mouse’s cage might not be the most exciting part of an experiment, but it’s a detail researchers can’t afford to ignore. 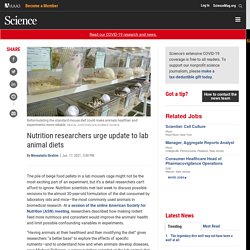 Nutrition scientists met last week to discuss possible revisions to the almost 30-year-old formulation of the diet consumed by laboratory rats and mice—the most commonly used animals in biomedical research. At a session of the online American Society for Nutrition (ASN) meeting, researchers described how making rodent feed more nutritious and consistent would improve the animals’ health and limit possible confounding variables in experiments. “Having animals at their healthiest and then modifying the diet” gives researchers “a better base” to explore the effects of specific nutrients—and to understand how and when animals develop diseases, says Michael Pellizzon, a senior nutrition scientist at the lab animal diet manufacturer Research Diets, Inc., and a panelist at the ASN session.

Paleontologists uncover fossils of Earth's earliest parasites. The relationship between parasite and host is as old as many of the world's earliest animals. 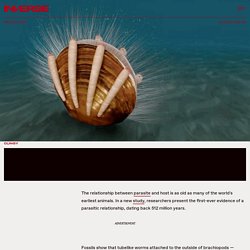 In a new study, researchers present the first-ever evidence of a parasitic relationship, dating back 512 million years. Could Bacteria Save the Planet? Yes — If She Can Train Them. Fatberg in London. Watch London's Gross Fatberg Gruesomely Transform in Real Time. Canadians say they contracted parasitic hookworms on beach. By Daniel Roth For Dailymail.com 00:40 EST 29 Jan 2018, updated 21:51 EST 29 Jan 2018. 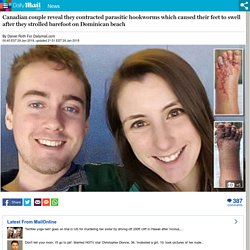 The Battle for the Ossabaw Island Pig. How to Trap Gators and Influence People. 9 Beautiful Portraits of Rescued Owls. Forrest, a Great Horned Owl. 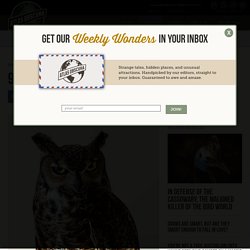 (All photos: © Leila Jeffreys) Photographer Leila Jeffreys settled her carefully chosen subject into position. The background was a complimentary shade of light brown. Except this was not an ordinary portrait shoot. Species Definition According to DNA (Video) Do Dogs Feel 'Guilty' Like We Do? Here's What The Science Says. ’Bama vs. Gators. Crocodiles Can Climb Trees To Hunt Prey From Above Or Below, Researchers Find. From Mother Nature Network's Bryan Nelson: If you thought that climbing a tree was a prudent way to escape a crocodile, think again. 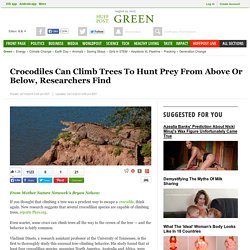 New research suggests that several crocodilian species are capable of climbing trees, reports Phys.org. Even scarier, some crocs can climb trees all the way to the crown of the tree — and the behavior is fairly common. Vladimir Dinets, a research assistant professor at the University of Tennessee, is the first to thoroughly study this unusual tree-climbing behavior. His study found that at least four crocodilian species, spanning North America, Australia and Africa, were capable of climbing trees: Australian freshwater crocodiles, American crocodiles, Central African slender-snouted crocodiles and Nile crocodiles. Alien-Like Worm Invades US. A bizarre invasive worm with its mouth in the middle of its belly has been found in the United States for the first time, according to new research. 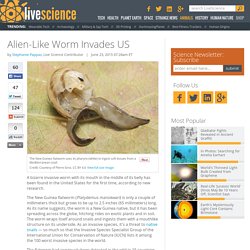 The New Guinea flatworm (Platydemus manokwari) is only a couple of millimeters thick but grows to be up to 2.5 inches (65 millimeters) long. As its name suggests, the worm is a New Guinea native, but it has been spreading across the globe, hitching rides on exotic plants and in soil. The worm wraps itself around snails and ingests them with a mouthlike structure on its underside. As an invasive species, it's a threat to native snails — so much so that the Invasive Species Specialist Group of the International Union for Conservation of Nature (IUCN) lists it among the 100 worst invasive species in the world. The genes that turned wildcats into kitty cats. Place a housecat next to its direct ancestor, the Near Eastern wildcat, and it may take you a minute to spot the difference. 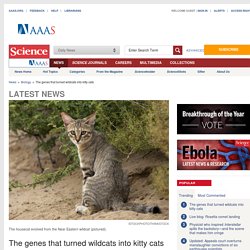 They’re about the same size and shape, and, well, they both look like cats. Meet the electric life forms that live on pure energy - life - 16 July 2014. Read full article Continue reading page |1|2 Video: Electric bacteria connect to form wires Unlike any other life on Earth, these extraordinary bacteria use energy in its purest form – they eat and breathe electrons – and they are everywhere STICK an electrode in the ground, pump electrons down it, and they will come: living cells that eat electricity. 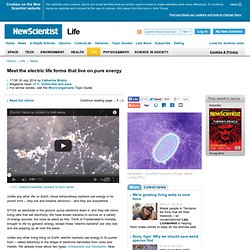 We have known bacteria to survive on a variety of energy sources, but none as weird as this. Unlike any other living thing on Earth, electric bacteria use energy in its purest form – naked electricity in the shape of electrons harvested from rocks and metals. That should not come as a complete surprise, says Kenneth Nealson at the University of Southern California, Los Angeles. 3-D imaging provides window into living cells, no dye required.

1/21/2014 | Liz Ahlberg, Physical Sciences Editor | 217-244-1073; eahlberg@illinois.edu CHAMPAIGN, Ill. — Living cells are ready for their close-ups, thanks to a new imaging technique that needs no dyes or other chemicals, yet renders high-resolution, three-dimensional, quantitative imagery of cells and their internal structures – all with conventional microscopes and white light. 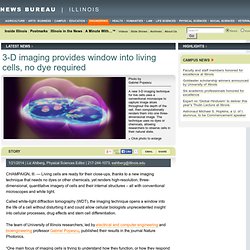 Called white-light diffraction tomography (WDT), the imaging technique opens a window into the life of a cell without disturbing it and could allow cellular biologists unprecedented insight into cellular processes, drug effects and stem cell differentiation. The team of University of Illinois researchers, led by electrical and computer engineering and bioengineering professor Gabriel Popescu, published their results in the journal Nature Photonics.

“One main focus of imaging cells is trying to understand how they function, or how they respond to treatments, for example, during cancer therapies,” Popescu said. Bigfoot Sightings Map: See 92 Years Of 'Squatch In The U.S., Canada By Josh Stevens (PHOTO) Bigfoot is legendary in the Pacific Northwest, but he has also taken a liking to Florida over the past century. At least according to a project by Josh Stevens, who mapped out every Bigfoot sighting compiled by the Bigfoot Field Researchers Organization from 1921 to 2012. Death Spreads Like Blue Wave Across Body In New Worm Study. Death comes to all animals, but how? Scientists Clone Human Embryos To Make Stem Cells : Shots - Health News. Self-medication in animals much more widespread than believed. It's been known for decades that animals such as chimpanzees seek out medicinal herbs to treat their diseases.

But in recent years, the list of animal pharmacists has grown much longer, and it now appears that the practice of animal self-medication is a lot more widespread than previously thought, according to a University of Michigan ecologist and his colleagues. Animals use medications to treat various ailments through both learned and innate behaviors. Accepting Alternate Forms Of Intelligence In The Animal Kingdom. The Bizarre History of Insect Head Transplants.