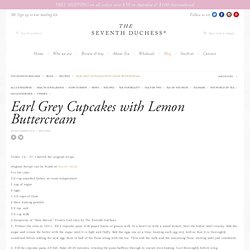 Earl Grey Tea, Blueberry and Lemon Cake. A.k.a the most sophisticated loaf cake you’ll ever eat. 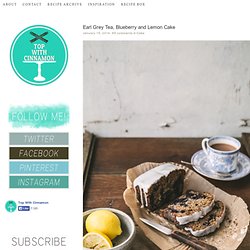 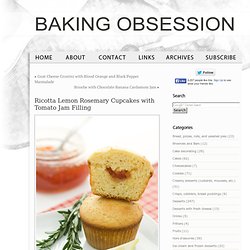 But it seems an unfortunate habit for me to pick up some nasty flu virus when the flu season is already over and everybody else but me enjoys outdoors, warm weather and sunshine. Devil’s Mini-Cupcakes with Lemon Cream Cheese Frosting. I made these little cakes for my son’s school birthday party. 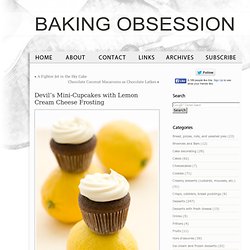 We’d been arguing for a while if they should (or should not) have colored sprinkles on their tops. Tim kept saying that the sprinkles could significantly increase the cupcakes’ popularity. Well, I had my own counterarguments, and I won after all. They were very well received nevertheless. The cupcake batter is a famous Flo Braker’s devil’s food cake; the one that Alice Medrich tried to improve but couldn’t make it any better. Makes 48 mini-cupcakes. Lemon & olive oil cupcakes with raspberry cream cheese frosting v2.0.

I reckon if you could taste sunshine it would taste like tangy citrusy lemon and the grassy fruity and pepperiness you get in really good olive oil. When brûlée goes bad: Lemon Coconut Cheesecake Bars. Amélie Poulain cultive un goût particulier pour les tous petits plaisirs. 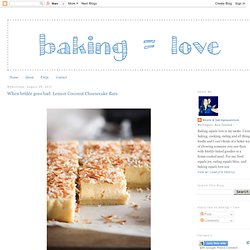 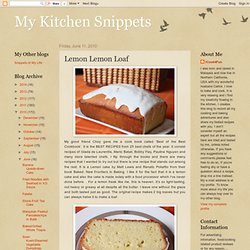 It is the BEST RECIPES from 25 best chefs of the year. It consist recipes of Giada de Laurentiis, Mario Batali, Bobby Flay, Pauline Nguyen and many more talented chefs. I flip through the books and there are many recipes that I wanted to try out but there is one recipe that stands out among the rest. Lemon Curd Pound Cake. I know I have been featuring a lot of recipes using lemons but I can't help it as I have ample supply of Meyer lemons from my neighbor. 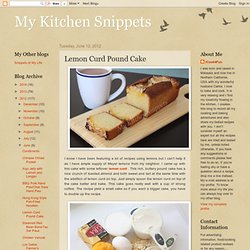 I came up with this cake with some leftover lemon curd . This rich, buttery pound cake has a nice crunch of toasted almond and both sweet and tart at the same time with the addition of lemon curd on top. Just simply spoon the lemon curd on top of the cake batter and bake. Improved Lemon Curd. Did you know that there is no such a thing as a Meyer lemon anymore? 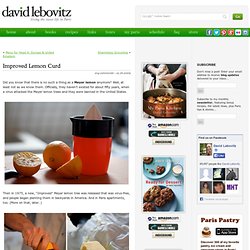 Well, at least not as we know them. Officially, they haven’t existed for about fifty years, when a virus attacked the Meyer lemon trees and they were banned in the United States. Then in 1975, a new, “Improved” Meyer lemon tree was released that was virus-free, and people began planting them in backyards in America. And in Paris apartments, too. (More on that, later…) Some think that the now-extinct Meyer lemons, and the new, Improved Meyer lemons, are a hybrid between oranges and lemons. 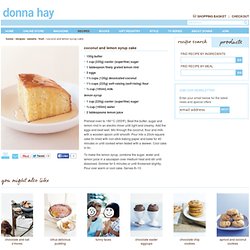 Beat the butter, sugar and lemon rind in an electric mixer until light and creamy. To make the lemon syrup, combine the sugar, water and lemon juice in a saucepan over medium heat and stir until dissolved. Heston Blumenthal’s Lemon Tart Recipe. 1. 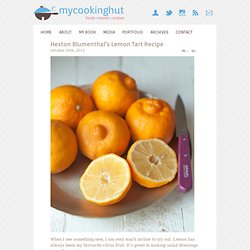 Using a mixer fitted with a paddle attachment, mix the flour, butter and salt on low speed until it becomes a sand like texture (approximately 2-3 minutes). 2. In the meantime, in a tall container blitz together the icing sugar and egg yolks with a hand blender. 3. Meyer Lemon and Blueberry Bread. In looking for a way to use up the rest of my meyer lemons, it occured to me to make some sort of baked good.

A stretch, I know. Actually, my first thought was to make a lemon pudding. This thought took place before I completely lost my appetite for custardy desserts, so it wouldn’t do. Lemon Cornmeal Breakfast Cake. There are only three reason why I would rip the shirt off my body in public: 1. If a kitten were on fire and I needed to smother him, put him out, cuddle him, give him food, and make him mine forever. 2. If I discovered a bee… a ferocious, man-eating bee, down my shirt. 3.

Yesterday, I ripped my shirt off in a spazzy, screaming fit on Main Street in Santa Monica. Then I was just standing there… on the street… shirtless… in my ugly bra… the one that looks like my grandma’s sprotsbra. Mini Lemon Cheesecake. Adapted from: Cuisine Paradise Make 12 | Prep Time: 15 minutes | Bake Time: 22 minutes Ingredients: Crust: 3/4 cup graham cracker crumbs (7 graham crackers) 1 tablespoon brown sugar, packed 3 tablespoons unsalted butter, melted Filling:

Triple berry summer buttermilk bundt. Our toddler left us. Or, at least until Friday. Over the last 2 3/4 years, we’ve occasionally been blessed with the chance to go away for a few days . Lemon Blueberry Bread Recipe. Lemon Blueberry Bread Recipe: Preheat oven to 350 degrees F (180 degrees C) and place the oven rack in the center of the oven. Lemon Coconut Bread. One of my favorite quickbread recipes is the Coconut Bread from bills, Bill Granger‘s restaurant in Sydney, Australia. It’s one of those recipes that works so well as-is that I am never really tempted to stray from making the recipe just as it is written. Lemon Cranberry Coconut Bread. Lemon Blackberry Coffee Cake with Lemon Streusel. This Lemon Blackberry Coffee Cake is another recipe that takes advantage of fresh, summertime berries. I, obviously, used blackberries in this case. Lemony Olive Oil Banana Bread Recipe. Certain adventures call for the perfect banana bread, and this was one of them.

Lemon-Drenched Lemon Cake. Lemon and Matcha Marble Pound Cake. My friend makes one small mention of Rachel Zoe this morning and here I am, shoulders deep into a Rachel Zoe Project marathon. Shameless. Glazed Lemon Bread Recipe. Tip: eggs rise better when they are at room temp. If you are pressed for time and have cold eggs, put them in a bowl of warm water (not hot, warm) for a few minutes before using. Ingredients. Lemon cake. I have this theory, or shall we call it a personality disposition, that nothing is ever really perfect.

While I would argue this pickiness is unfortunate outside the kitchen — “This date would have been even more perfect if I’d ordered the eggplant and not the chicken.” “I love my haircut except this completely unnoticeable thing going on in the back.” — within the confines of the galley walls, I think nit-picking, when done quietly, helps us become better cooks. Lemon yogurt anything cake.