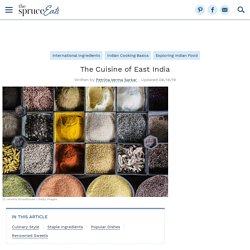 This region is home to beaches and mountains and Cherrapunji, the city with the highest rainfall in the world. Because of the climate, Eastern India grows a lot of rice! Green vegetables and fruit are also abundant and thus are the recipes using them. The Cuisine of North India. North India has extreme climates – summers are hot, and winters are cold. 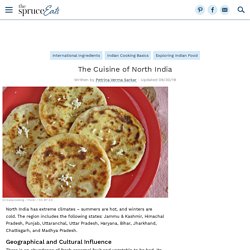 The region includes the following states: Jammu & Kashmir, Himachal Pradesh, Punjab, Uttaranchal, Uttar Pradesh, Haryana, Bihar, Jharkhand, Chattisgarh, and Madhya Pradesh. Geographical and Cultural Influence There is an abundance of fresh seasonal fruit and vegetable to be had. Its geographical position with relation to the rest of the Sub-continent means that this region of the country has had strong Central Asian influences both in its culture and its food. Mughlai and Kashmiri styles of cooking are not just prevalent; they are also popular. 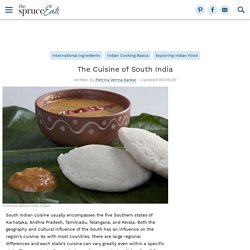 Both the geography and cultural influence of the South has an influence on the region's cuisine. As with most countries, there are large regional differences and each state's cuisine can vary greatly even within a specific state. Western Indian Cuisine. The western region of India includes the following states: Rajasthan, Gujarat, Maharashtra, and Goa. 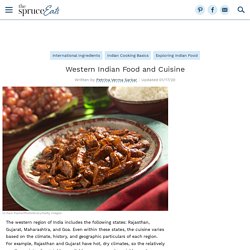 Even within these states, the cuisine varies based on the climate, history, and geographic particulars of each region. For example, Rajasthan and Gujarat have hot, dry climates, so the relatively smaller variety of vegetables available are preserved as pickles and chutneys. Goa is a major port known for trade and was colonized by Portugal, so is known for beef, port, and vinegar, which are all Portuguese influenced ingredients. Geographical and Cultural Influence on the Regions Cuisine Culturally, these Indian states are largely Hindu and vegetarian. Guide to Indian Dining Traditions and Etiquette. So you've been invited to a meal at an Indian home. 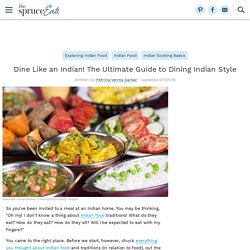 You may be thinking, "Oh my! I don't know a thing about Indian food traditions! What do they eat? How do they eat? The Ultimate Indian Bread Guide. From being used as a utilitarian bowl that helped ancient travelers scoop curry to acting as symbol of revolt against colonial rule, the diversity of bread in India is a testimony to its layered culinary legacy. 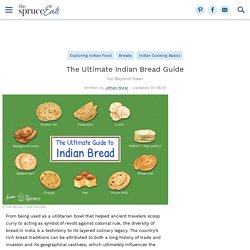 The country’s rich bread traditions can be attributed to both a long history of trade and invasion and its geographical vastness, which ultimately influences the choice of grains and cooking techniques. Some generalizations can be made, but it’s hard to pin down an all-encompassing Indian bread. There are some connections that can be made—it is, for example, safe to say that most flatbreads from northern India are unleavened and made from milled flour. These humble breads—usually eaten with lentils, dry vegetable sabzis, and meat salads—are the unsung everyday heroes of most households. In southern India and the West Coast, rice and peeled and split black lentils are usually the starter base for breads. Agneau Hara Masala. Chops Hara Masala is a simple dish and is a great lunch or dinner option for those cutting down on carbohydrates in their meals. 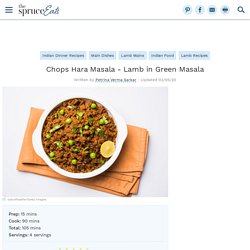 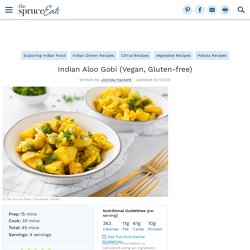 Aloo gobi is a vegetarian Indian food recipe consisting of potatoes and cauliflower cooked in a host of flavorful Indian spices. Although it's been around for years, aloo gobi recently achieved world-wide fame through the popular British football (soccer, if you're American!) Film "Bend it Like Beckham. " Aloo Matar (Petits pois et pommes de terre mijotés) See Full Nutritional GuidelinesHide Full Nutritional Guidelines (Nutrition information is calculated using an ingredient database and should be considered an estimate.) 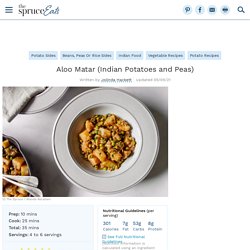 There are many different ways to prepare Aloo Matar, the classic Indian dish with spiced potatoes (aloo) and peas (matar) in a thick sauce. Originating in the Punjab region of India, the dish is made throughout the country and has a few different versions: some recipes use a coconut base, and others simmer the potatoes in a tomato sauce. This version is a simple recipe that's easy to tweak and make your own. Aubergines farcies à l'indienne. These are baby eggplants stuffed with a delicious, tangy spice mix! 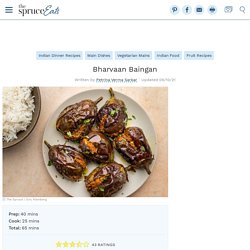 See Full Nutritional GuidelinesHide Full Nutritional Guidelines (Nutrition information is calculated using an ingredient database and should be considered an estimate.) Biryani is a pleasure to behold and eat. Biriyani de crevettes. Rice, Prawns & Exotic Spices… layered with Caramelized Onions, Saffron and Fresh Herbs… Mouth Watering and Delicious! An Indian Delicacy – Biriyani…!!! The name “Biryani” is said to have been derived from the Persian Language, and History has many great stories to say about its origin. Biriyani de poisson. Aromatic and Flavorful… An Authentic Kerala Style Fish Biriyani with Spices, Fresh Herbs & Coconut milk…!

Biriyani – it’s that one dish which every Indian will unanimously say YES if offered! A scrumptious pot of a zillion ingredients put together; the pre-preps, marinades, layers, garnishes, and all the hard work will surely pay off when you savour your first bite. It’s quite interesting to read about the origin and history of biriyani, check out my earlier Prawn Biriyani post to know more.

Biryani au poulet. Boeuf keralais. See Full Nutritional GuidelinesHide Full Nutritional Guidelines (Nutrition information is calculated using an ingredient database and should be considered an estimate.) This delicious dish is a favorite in the South-Indian state of Kerala. Kerala Beef Fry is a dish that I versatile, served not only as a snack when friends visit but also as a main course dish with dosas, idlis or appams—these are all various kinds of Indian bread.