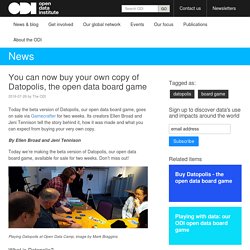 Its creators Ellen Broad and Jeni Tennison tell the story behind it, how it was made and what you can expect from buying your very own copy. The Tools of a Blind Programmer – Parham Doustdar's Blog. When I posted the Autobiography of a Blind Programmer, I received a lot of requests asking about the way I use the computer, how I write code, and how I understand abstract concepts. 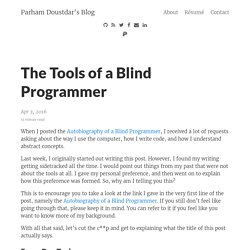 Last week, I originally started out writing this post. However, I found my writing getting sidetracked all the time. I would point out things from my past that were not about the tools at all. I gave my personal preference, and then went on to explain how this preference was formed. So, why am I telling you this? This is to encourage you to take a look at the link I gave in the very first line of the post, namely the Autobiography of a Blind Programmer. With all that said, let’s cut the c**p and get to explaining what the title of this post actually says. Every Day Tools Screen Readers Blind and visually impaired computer users use what is called a screen reader to—make a guess! Screen readers, just like other programs, have different features based on which one you are using. These are all for Windows, though. If programming languages were "Game of Thrones" characters. Creating a programming language is a bold quest for dominion. 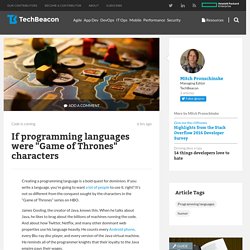 If you write a language, you're going to want a lot of people to use it, right? It’s not so different from the conquest sought by the characters in the “Game of Thrones” series on HBO. James Gosling, the creator of Java, knows this. When he talks about Java, he likes to brag about the billions of machines running the code. And about how Twitter, Netflix, and many other dominant web properties use his language heavily.

In honor of this month's season premiere of "The Game of Thrones," (season six) here are some comparisons I've made between various programming languages and the show's characters. Java Daenerys Targaryen is Java She surrounds herself with a great ecosystem of advisors and is popular for freeing those enslaved in the past, as Java freed users from Microsoft. JavaScript Tyrion Lannister is JavaScript HBO / via credit Tywin Lannister is C He’s pretty dead now, but his legacy lives on. Cersei Lannister is C++ Bronn is PHP. The art of building software: Ruby and the Three P's versus Java and the Argonauts. 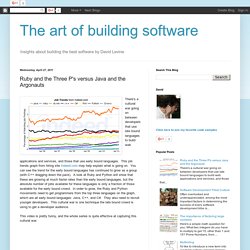 This video is pretty funny, and the whole series is quite effective at capturing this cultural war. This advantage disappears as the programmer gets older though. NY Public Library Embraces The Public Domain Big Time: Releases 180,000 High Resolution Images. There's some wonderful news from the NY Public Library, which has released over 180,000 high resolution digital images of public domain works that it found in its collection. 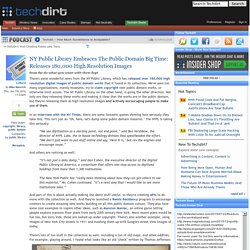 We've seen too many organizations, mainly museums, try to claim copyright over public domain works, or otherwise limit access. The NY Public Library, on the other hand, is going the other direction. Not only are they releasing these works and making it clear that the works are in the public domain, but they're releasing them as high resolution images and actively encouraging people to make use of them. In an interview with the NY Times, there are some fantastic quotes showing how seriously they take this. This isn't just an "Oh, here, let's dump some public domain material. " Introduction to Data Analysis. François Briatte and Ivaylo PetevSciences Po, Euro-American Campus Spring 2013 This course is an introduction to analyzing data with the R software. 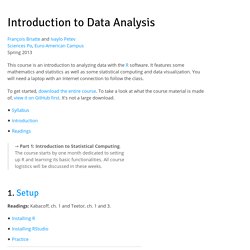 It features some mathematics and statistics as well as some statistical computing and data visualization. You will need a laptop with an Internet connection to follow the class. To get started, download the entire course. What’s Hot & What’s Not in Data Science 2015.