What's happening in the Digital Realm ?

Vlogit.fi – Lista vloggaajista ja videoblogeista, yli 500 vlogia! Singa, a startup out of Helsinki, scores €1.75M seed round to build the ‘Spotify of karaoke’ I have an aversion to karaoke after the band I used to play in was entirely upstaged at a gig by a karaoke machine, but, as pastimes go, it remains a huge market. 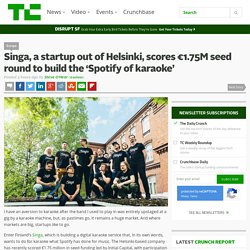 And where markets are big, startups like to go. Enter Finland’s Singa, which is building a digital karaoke service that, in its own words, wants to do for karaoke what Spotify has done for music. The Helsinki-based company has recently scored €1.75 million in seed funding led by Initial Capital, with participation from Tamares Holdings, Superhero Capital, Reaktor Ventures and Tekes. “Over my 10 years in the karaoke industry running Karaoke World Championships, I worked with big and small karaoke companies all over the world, from Asia to the U.S., and gained insight into the industry and saw that while most other entertainment media were moving towards streaming, karaoke was still stuck in the 90s,” Singa co-founder and CEO Atte Hujanen tells me.

VR startups go into cockroach mode to survive barren consumer market. The VR industry continues to ride out the trough of disillusionment, prodded by the big tech players like HTC that hope to jumpstart a market that is ultimately driven by genuine and organic consumer demand, but there’s no sign of this actually happening. 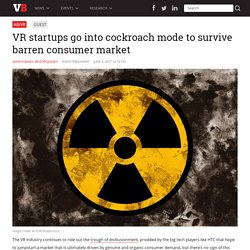 There might be some traction that pundits base their optimistic forecasts on, but hardly any of that is organic. Rather, it’s a reflection of massive marketing dollars at play. Meanwhile VR startups with products or services that depend on consumer demand appearing sooner rather than later are left in an awkward position. “The VR market is still very young and consumers seem to be taking a cautious approach,” Jitesh Ubrani, senior research analyst at IDC told MarketWatch this week. “With plenty of headset options already in the market and even more coming soon, hardware isn’t the issue. Best way for musicians & bands to get sustainable income and connect with fans. Insights - App Annie. World Internet Users Statistics and 2016 World Population Stats. Internet Top 20 Countries - Internet Users 2016. 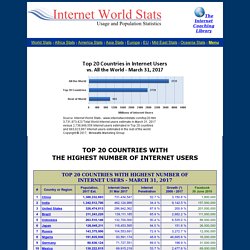 With profits down between 5% and 10% on an annual basis, the performance of the traditional advertising market is under constant pressure. Data analytics is exposing the weakness of these traditional advertising business models and, like all of the other sectors affected by the digital economy, this means that these business models need to change.Internet Governance and Net Neutrality Insights The report analyses the developments regarding governance of the Internet and draws on developments from the World Conference on International Telecommunications (WCIT) and provides a case study on developments in the US in regards to net neutrality. 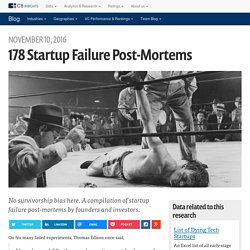 A compilation of startup failure post-mortems by founders and investors. On his many failed experiments, Thomas Edison once said, I have learned fifty thousand ways it cannot be done and therefore I am fifty thousand times nearer the final successful experiment. Elsewhere, we have dug into the data on startups that died (as well as those acquihired) and found they usually die 20 months after raising financing and after having raised about $1.3 million. So we thought it would be useful to see how startup founders and investors describe their failures. Most of the failures have been told by the company’s founders, but in a few cases, we did find a couple from competitors, early employees, or investors including Roger Ehrenberg (now of IA Ventures) and Bruce Booth (Atlas Venture). 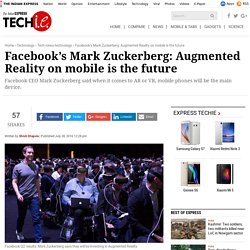 Facebook’s second quarter results are now out with the company’s revenue clocking in at $6.44 billion, and the social network’s user base standing at 1.71 billion monthly active users. In the earnings call, Facebook CEO Mark Zuckerberg also revealed some interesting insights on what the company is doing with Augmented and Virtual Reality. Facebook owns Oculus VR which has created the Oculus Rift headset that went on sale earlier this year. Zuckerberg revealed in the earnings call that more than 1 million people (per month) use Oculus on mobile phones thanks to Samsung-Oculus Gear VR headset. Samsung’s Gear VR headset is powered by Oculus software, and users need an Oculus account to get the VR experience via their smartphones. Europe's Startups Are On The Map: The Most Well-Funded Tech Startups In Every European Country. Our map infographic shows the top tech startups mapped by European country, as determined by funding totals. 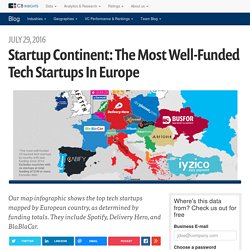 They include Spotify, Delivery Hero, and BlaBlaCar. Europe is home to prominent startup and innovation hubs like Berlin, Stockholm, and London. However, the tech boom is diffusing across continental Europe and startups are emerging outside of the established hotbeds for technology and innovation. Articles by KPCB Partners. The Most Active AR/VR VCs And Their Investments In One Infographic. 156 Startup Failure Post-Mortems.