Crunchies 2011 (Kati Rovetta ilmoitti meidät) Discover New Music Artists & Bands On Android With Hitlantis. Hitlantis is a famous web service that helps budding music artists and bands to showcase their skills to the world by providing them a much sought-after launching platform. 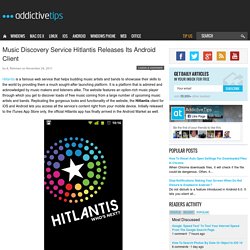 It is a platform that is admired and acknowledged by music makers and listeners alike. The website features an option-rich music player through which you get to discover loads of free music coming from a large number of upcoming music artists and bands. Replicating the gorgeous looks and functionality of the website, the Hitlantis client for iOS and Android lets you access all the service’s content right from your mobile device. Initially released to the iTunes App Store only, the official Hitlantis app has finally arrived in the Android Market as well. Upon launch, the app displays an interactive map of music (like the one on the website) made up of color-coded bubbles, where each bubble represents a certain music artist/band and each color refers to a particular genre of music.

Infographic Of The Day: A Dynamic Map Of The Indie-Music Universe. The debate around self-driving cars has continued to escalate as they hit the road this month in Pittsburgh. 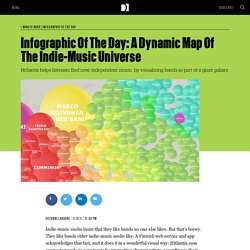 But what about other kinds of vehicles that could benefit from similar technology? MIT's Senseable City Lab and AMS, the Amsterdam Institute for Advanced Metropolitan Solutions, have come together to explore the idea of self-driving boats. Along with researchers from Delft University of Technology and Wageningen University and Research, the City of Amsterdam, and the city's public water utility company Waternet, the two groups recently launched a new project called Roboat, which will deploy a fleet of autonomous vessels into the extensive canals and waterways of the Dutch capital. "We want to start testing autonomous boats in an urban context—an unprecedented result which could potentially give us useful insights for all those cities and metropolis facing ports, rivers, or waterways," says Carlo Ratti, one of MIT's principal investigators on the project. Yritys. RockStar Motel (KILPAILIJA)

THE 2011 BULLY AWARD WINNERS! Once again we searched out the "wily beast" that we believe lives inside all successful businesses. 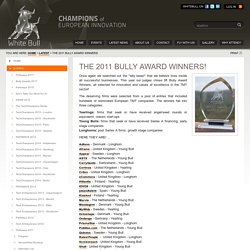 This year our judges chose 31 Bully Award Winners, all selected for innovation and values of excellence in the TMT sector! The deserving firms were selected from a pool of entries that included hundreds of nominated European TMT companies. The winners fall into three categories: MEET OUR 2011 BULLY AWARD FINALISTS! 404. White Bull 2011: Google explains how to build billion dollar firms in Europe - Yeah right. “Money is now a commodity, we all need talent” – Tony Kypreos at springboard.com Google is trying to invest $100 million a year in other companies, its Swiss VC guy said here this morning. 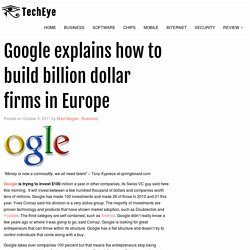 It will invest between a few hundred thousand of dollars and companies worth tens of millions. Google has made 100 investments and made 26 of those in 2010 and 21 this year. Yves Cornaz said his division is a very active group. The majority of investments are proven technology and products that have shown market adoption, such as Doubleclick and Youtube. Korea.html. Venture capital - Tech Europe. Using Dual-Currency Systems for Better Revenues and Engagement. [Editor’s Note: This is a guest post by Matt McAllister and Jaini Shah of Offerpal Media. 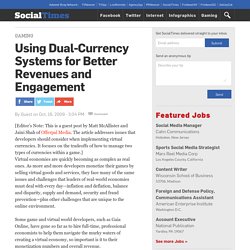 The article addresses issues that developers should consider when implementing virtual currencies. It focuses on the tradeoffs of how to manage two types of currencies within a game.] Record Label A&R, A&R Contacts - Music Industry Contacts. Most artists and bands dream of someday Landing a deal with a record label A&R, below I’m going to cover issues related to your dealings with record label A&R particularly the terms of recording contracts mostly this paragraph will focus on what you can expect in a contract from a major record label A&R. 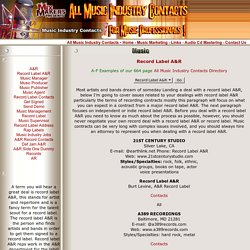 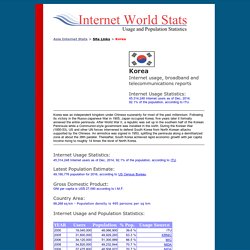 But young men in the cities are by far the most likely to be Net-savvy. Since the start of commercial services in 1994 (read article below), the Internet population has been steadily increasing to a point where it is now nears the penetration rate of mobile phones. Still, South Korea's Internet success has spawned something of a digital divide between ages, sexes and regions. More than 95 percent of those aged 6 to 29 periodically go online, compared with 86.4 percent of those in their thirties, 58.3 percent of people in their forties and just 27.6 percent of those in their fifties. The survey also showed that Internet usage stands at 74.4 percent for men, compared with 62 percent of women.

iPhone and Galaxy S Spur Growth in South Korea’s Smartphone Market. Just a year and a half ago, smartphones were nearly absent from South Korea's wireless market, but a smartphone boom hit the country last year following Korea Telecom’s (KT) introduction of iPhones. 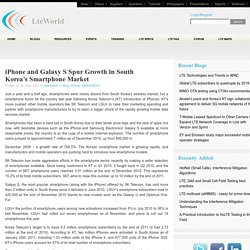 KT's move pushed other mobile operators like SK Telecom and LGU+ to raise their marketing spending and partner with smartphone manufacturers to try to claim a bigger chunk of the rapidly growing mobile data services market. Smartphones had been a hard sell in South Korea due to their lavish price tags and the lack of apps, but now, with desirable devices such as the iPhone and Samsung Electronics' Galaxy S available at more reasonable prices, the country is on the cusp of a mobile Internet explosion. The number of smartphone users jumped to approximately 7 million as of December 2010, up from 806,000 in December 2009 – a growth rate of 768.5%. Android the Big Winner in Korea’s Ongoing Smartphone Boom – Footman's Frothings. New figures from the Korea Communications Commission show that Korea now has more than 10 million registered smartphones. 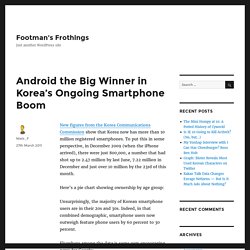 To put this in some perspective, in December 2009 (when the iPhone arrived), there were just 800,000, a number that had shot up to 2.47 million by last June, 7.22 million in December and just over 10 million by the 23rd of this month. Here’s a pie chart showing ownership by age group: Unsurprisingly, the majority of Korean smartphone users are in their 20s and 30s. How Justin Timberlake plans to make MySpace cool again. Justin Timberlake's long-time manager Johnny Wright says that a talent show or some other way of developing new artists will be core to the revamp of MySpace. 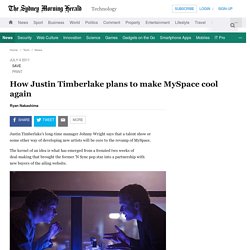 The kernel of an idea is what has emerged from a frenzied two weeks of deal-making that brought the former 'N Sync pop star into a partnership with new buyers of the ailing website. "Whether it becomes a talent competition or something like that, those are things that we will still flesh out," said Wright, who has managed Timberlake since his 'N Sync days. "We definitely want to bring the industry back to MySpace to really look at the talented people that have put their faces there. " Timberlake and the new management of the social networking site will explain their plans at a press conference on August 17. Sir Peter Bonfield CBE FREng. Popkatu 2016 - Etusivu. Helsinki Region Infoshare. Audiosauna - Online Audio Workstation. Communtity of Digital Curators.

Www.hitlantis.com/bandlist.php. Beta.hitlantis.net/doc. Pandora Debuts on New York Stock Exchange. It’s not every day that writing about music apps means discussing a $2.6 billion initial public offering. Pandora’s IPO valued the company, whose customizable streaming radio service is used by approximately one out of every ten Americans, at $2.6 billion dollars, or $16 per share under the symbol “P.” As the chart above shows (via Google, which has updated numbers), trading spiked sharply when the market opened, and the company’s value increased upwards of 40 percent in less than an hour. TechCrunch and others report that Pandora has 94 million users, but Evolver.fm recently learned that only around 30 million of those are active users of the service — not bad, considering that it’s only available in America, which has a population of about 307 million, many of whom aren’t music fans and/or don’t have broadband, a cellular data plan, a smartphone, or a Sonos.

Kyrol Inc (bublaan tekijät) MySpace Still Pays $60,000 A Month For Parking & Other Stats From Company In Decline. As NewsCorp reportedly moves closer to deal to unload MySpace - or at least partner with someone to try to rebuild it - a variety of stats about the struggling social network are leaking. Some we knew, other are surprising and downright sad - particularly for a company that is losing money despite massive layoffs and supposed cost cutting measures. The surprising MySpace stats: News Corp paid $580 million for MySpace in 2005Offers to buy are under $100 million MySpace still pays $60,000 a month for parking MySpace still pays $800,000 a month in legal fees The site had 7.1 million unique U.S. visitors in AprilThat's down 46% from the same period last yearTraffic is down from 70.9 million in April 2009, according to comScore.

Fuse Media Group. Thanks To Social Marketing Guru Chris Brogan For 3 Words To Guide Us In 2011.