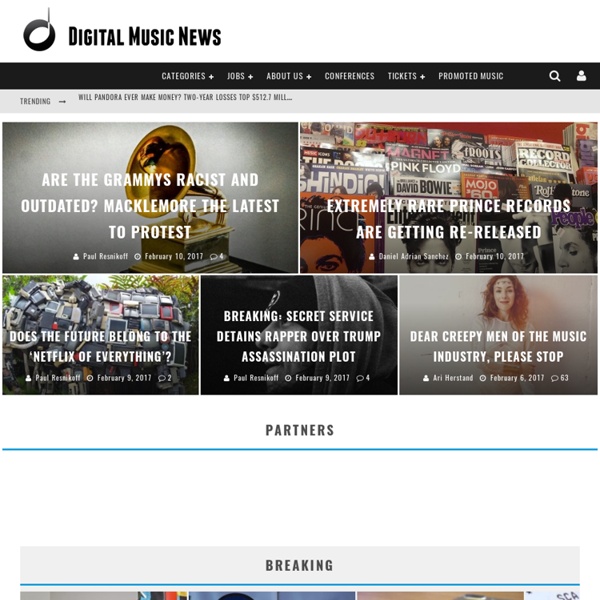 How Spotify Changed Music We used to listen to music on our mobile devices in private. Now, we share our listening activities to Facebook and show our friends the song we are currently playing. If they want to, they can even tune in and listen with us. Rather than listen to music alone, we now listen together. And of course, we now listen to playlists over albums. Indeed, what once seemed like a utopia to many listeners — having free, ad-supported access to millions of songs on your desktop and paying to take them anywhere you go — has become a new reality. Lefsetz Letter My car radio broke. I turned it on and all I got was static. Now my friend Jeff says it’s because I started my car with the a/c on, but I’d never had a problem previously. And then I realized I could get FM, but the tuner skipped over Sirius, and on XM I got the aforementioned static. Yes, I have both in my car, it’s a legacy from when the outlets were different. And to tell you the truth, I still used both, each tuner had pluses and minuses.

Beats Music is launching January 21st That's Beats' new streaming service. No surprise, of course. Seems like the Jimmy Iovine / Dr. sciencedaily AI Artificial Intelligence May Fall Short When Analyzing Data Across Multiple Health Systems Nov. 9, 2018 — A new study shows deep learning models must be carefully tested across multiple environments before being put into clinical ... read more Oct. 25, 2018 — Researchers present a quantum error correction system that is capable of learning thanks to artificial ... read more Where Deep Learning Meets Metamaterials Top Analyst Reviews Spotify's Financials, Declares Business "Unsustainable" [CHART] PrivCo, a financial analysis firm focusing on private companies, got a look at Spotify's just closed full year financials and declared the music streamer's business model "alarming" and "unsustainable". While Spotify revenue jumped 151% in 2011 to $244 Million, "virtually every new dollar of revenue went directly to music companies as royalty payments, evidencing the fact that the more members Spotify adds, the more money the company loses". It's a problem that Pandora and most other ad supported music services are facing , as well. Spotify's 2011 cost for 311 employees also grew 173% year over year, according to PrivCo, "outpacing revenue growth, and adding to the red flags that this business model needs to address".

About : Dust & Grooves ~ Vinyl. Music. Culture Dust & Grooves is a photography and interview project documenting vinyl collectors in their most natural and intimate environment: the record room. It all started out several years ago as nothing more than a way for photographer Eilon Paz to make use of his idle hours. Adrift in Brooklyn after emigrating from Israel, Eilon—a record collector on the side—thought it might be fun to start taking photos of people whose record collections were both larger and weirder than his own. Adopting this as his personal project, he began traveling the world, from Australia to Cuba and Argentina to Ghana, in pursuit of intriguing and memorable subjects.

As IFPI releases its ‘Investing In Music’ report, what role do record labels play in 2012? Tuesday 13 November 2012, 13:12 | By CMU Editorial Business News Labels & Publishers Top Stories Hey record company haters, gather round here and listen to this. 10 Great Places to Share Your Music Online It’s no earth-shattering news that the internet has basically changed the music industry for good. Technologies like file sharing, social media and eCommerce are giving artists more opportunities to expose their music to larger audiences and increase their fan base . But with so many websites and communities available, choosing the right online venues to promote your music on can be challenging. To help you make good choices, we put together a list of 10 great places to promote your music online today.

Next Time Someone Suggests Piracy Will Kill Music, Remind Them That Music Survived The Last Ice Age Music predates agriculture. That's something I suppose I always knew, but had never thought about in such clear terms until Bryan Kim illustrated it in a talk at SFMusicTech with a photo of a 35,000-year-old bone flute. This places music before farming and written language on the timeline of humanity, right alongside the earliest known cave paintings in Europe, at the very least. By comparison, recorded music has only been around for a little over a century. Trent Reznor & David Byrne On DIY vs Major Labels A talk Sunday night featuring David Byrne and Trent Reznor included an interesting discussion of the business options facing musicians today. Due to Trent Reznor's recent deal with Columbia Records for How to destroy angels_ coverage has focused on DIY vs Major Labels. However both artists shared the stance that the current landscape is not about label deals vs DIY but about choosing the right path and the right deals for the artist in question. Trent Reznor and David Byrne Discuss Major Labels and DIY

Music identification technology firm reckons 80% of commercial music usage badly reported Tuesday 16 October 2012, 11:47 | By CMU Editorial Digital Utilising Shazam-type technology to better report music usage to rights owners or their collecting societies has always seemed like a good plan, if the development and installation of such technology could be priced so not to be prohibitive, and a start-up in New York is basically doing just that with TV, via a fingerprinting system which it reckons can detect the use of music on any television programme, even if said music is in the background and has speech plonked on top. Whether the use of music in television shows is licensed directly from labels and publishers, or via rights bodies, the reporting of such usage is, to a large extent, reliant on broadcasters being honest and competent, the constant manual monitoring of TV networks worldwide being impractical. But, says TuneSat, the majority of commercial use of music by the television sector is either unreported or misreported, hence the need for its technology, it says.

British music revenue abroad has doubled since 2002 PRS for Music has announced that revenue from British music used abroad has doubled since 2002. During 2011, UK songwriters and composers earned £187.7m globally up 10.6% on 2010 (£169.6m). In all, PRS for Music represents 90,000 songwriters, composers and music publishers, collecting royalties from 150 territories around the world. Growth of £100m in international royalties since 2002 was attributed by the organisation to both the widespread consumption of British music and improved licensing of its use and efficiency of distribution around the world. Due to the success of its music creators, the UK is one of only three countries in the world that is a net exporter of music.