MAPS OF THE WORLD

European Country Quiz. Atlas of Prejudice. If It Were My Home. 40 Maps They Didn’t Teach You In School. By the time we graduate high school, we learn that they never taught us the most interesting things in there. 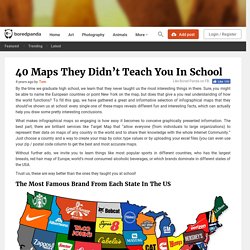 Sure, you might be able to name the European countries or point New York on the map, but does that give a you real understanding of how the world functions? To fill this gap, we have gathered a great and informative selection of infographical maps that they should’ve shown us at school: every single one of these maps reveals different fun and interesting facts, which can actually help you draw some pretty interesting conclusions. [Read more...] What makes infographical maps so engaging is how easy it becomes to conceive graphically presented information. The best part, there are brilliant services like Target Map that “allow everyone (from individuals to large organizations) to represent their data on maps of any country in the world and to share their knowledge with the whole Internet Community.” Trust us, these are way better than the ones they taught you at school!

The World Value Survey’s Map of Worldwide Racial Intolerance. This Map Showing What Each Country Leads The World In Is Really Quite Cool. World Population Map 2015 [OC] 2nd Largest Nationality Living In Each European Country. Map by reddit user JimWillFixIt69 The map above shows the flag of the 2nd largest nationality, by country of birth, living in each European country. 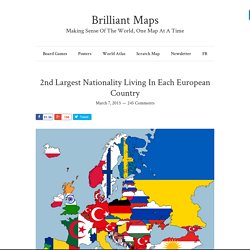 Thus, it may include citizens and those who have moved temporarily for work. Nevertheless, there are many surprises, such as: Ireland is no longer the largest source of foreign born residents to the UK. Since 2011, they’ve dropped to 4th, behind India, Poland and Pakistan. Controversially, the map author decided to include Kurdistan as a separate nation. Finally, because I know somebody is going to mention it, the United kingdom is treated as single country in the map above in keeping with the Countries in the International Organization for Standardization. For more you should also have a look at the Most Popular Migrant Destinations By Country map. Notice any other interesting, surprising or mistaken things in the map above?

Untitled. Second Languages Spoken by Countries Around the World. Do you know what your country or region’s second language is? 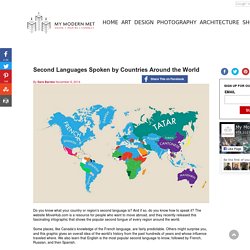 And if so, do you know how to speak it? The website MoveHub.com is a resource for people who want to move abroad, and they recently released this fascinating infographic that shows the popular second tongue of every region around the world. Some places, like Canada’s knowledge of the French language, are fairly predictable. Others might surprise you, and this graphic gives an overall idea of the world’s history from the past hundreds of years and whose influence traveled where. We also learn that English is the most popular second language to know, followed by French, Russian, and then Spanish. So, if you’re looking to take a vacation or make a long-distance move, this illustrative map is your guide to what language a country's residents are likely the most familiar with. MoveHub.com website via [L'Acte Gratuit and Business Insider]