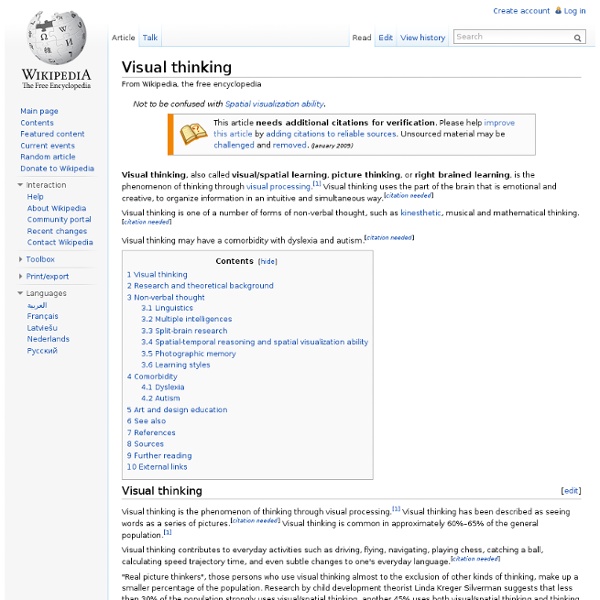 Visual Thinking + Synthesis Photo by Ken Yeung I really enjoy talking complex subjects, processes or business problems and boiling them down to their core essence. This is becoming known as the process of "Visual Thinking". I use visual metaphors and storytelling to do this. My style of visual thinking is immediately recognizable and has helped me build a strong following of influential professionals who use my visuals in their own presentations and documents.

Mind Maps and Mind Mapping The human brain is very different from a computer. Whereas a computer works in a linear fashion, the brain works associatively as well as linearly - comparing, integrating and synthesizing as it goes.Association plays a dominant role in nearly every mental function, and words themselves are no exception. Every single word, and idea has numerous links attaching it to other ideas and concepts. Mind Maps™, developed by Tony Buzan are an effective method of note-taking and useful for the generation of ideas by associations. Visualization (computer graphics) See also Information graphics Visualization or visualisation is any technique for creating images, diagrams, or animations to communicate a message. Visualization through visual imagery has been an effective way to communicate both abstract and concrete ideas since the dawn of man. Examples from history include cave paintings, Egyptian hieroglyphs, Greek geometry, and Leonardo da Vinci's revolutionary methods of technical drawing for engineering and scientific purposes. Visualization today has ever-expanding applications in science, education, engineering (e.g., product visualization), interactive multimedia, medicine, etc.

Mind map A mind map about educational technology A mind map is a diagram used to visually organize information. A mind map is hierarchical and shows relationships among pieces of the whole.[1] It is often created around a single concept, drawn as an image in the center of a blank page, to which associated representations of ideas such as images, words and parts of words are added. Major ideas are connected directly to the central concept, and other ideas branch out from those major ideas. Mind maps can also be drawn by hand, either as "rough notes" during a lecture, meeting or planning session, for example, or as higher quality pictures when more time is available. Mind maps are considered to be a type of spider diagram.[2] A similar concept in the 1970s was "idea sun bursting".[3]

Visual language A visual language is a system of communication using visual elements. Speech as a means of communication cannot strictly be separated from the whole of human communicative activity that includes the visual[1] and the term 'language' in relation to vision is an extension of its use to describe the perception, comprehension and production of visible signs. Overview[edit] Five glorious presentations on visual thinking Do you think in words or pictures, or both? Visual thinking engages the part of the brain that handles visual processing, and is said to be both "emotional and creative" so you can "organise information in an intuitive and simultaneous way". A picture really might be worth a thousand words, while being easier to understand and recall. Therefore it is worth exploring how visual thinking can help you communicate ideas to colleagues and clients. I have collated a few presentations to help you do exactly that.

19 Outstanding Words You Should Be Working Into Conversation There are some of our favorite words that appeared in mental_floss stories in 2011. Some are foreign words. Others come from medical dictionaries. And there's a surprising amount of hobo slang. Have fun working these into conversation this holiday season! Gene Lee / Shutterstock.com

Style and Figures of Speech - Understanding Figurative Language - Writing Persuasive Prose Education Grammar & Composition Share this page on: Send to a Friend via Email Your suggestion is on its way! Top 20 Figures of Speech - Figurative Language - Definitions and Examples of Figures of Speech By Richard Nordquist Updated September 22, 2015. A figure of speech is a rhetorical device that achieves a special effect by using words in distinctive ways. Though there are hundreds of figures of speech (many of them included in our Tool Kit for Rhetorical Analysis), here we'll focus on just 20 of the most common figures.