Iceland Stuns Banks: Plans To Take Back The Power To Create Money. Submitted by Raul Ilargi Meijer via The Automatic Earth blog, Who knew that the revolution would start with those radical Icelanders? 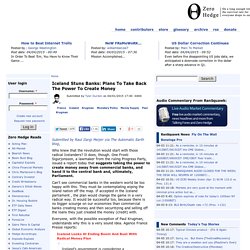 It does, though. One Frosti Sigurjonsson, a lawmaker from the ruling Progress Party, issued a report today that suggests taking the power to create money away from commercial banks, and hand it to the central bank and, ultimately, Parliament. Can’t see commercial banks in the western world be too happy with this. They must be contemplating wiping the island nation off the map. Everyone, with the possible exception of Paul Krugman, understands why this is a very sound idea. Iceland Looks At Ending Boom And Bust With Radical Money Plan Iceland’s government is considering a revolutionary monetary proposal – removing the power of commercial banks to create money and handing it to the central bank. Iceland Monetary Reform. Sweden Runs Out Of Garbage: Only 1% Ends Up In Landfills. Something incredible has been taking place in Sweden over the past several years, somewhat of a “recycling revolution,” if you will. 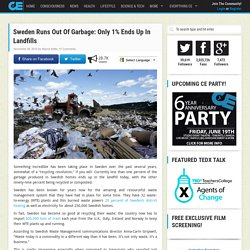 Currently less than one percent of the garbage produced in Swedish homes ends up in the landfill today, with the other ninety-nine percent being recycled or composted. Sweden has been known for years now for the amazing and resourceful waste management system that they have had in place for some time. They have 32 waste-to-energy (WTE) plants and this burned waste powers 20 percent of Sweden’s district heating as well as electricity for about 250,000 Swedish homes. In fact, Sweden has become so good at recycling their waste; the country now has to import 800,000 tons of trash each year from the U.K., Italy, Ireland and Norway to keep their WTE plants up and running.

According to Swedish Waste Management communications director Anna-Carin Gripwell, “Waste today is a commodity in a different way than it has been. Idle No More, Meet the Norwegians. Canada's elite lack guts dealing with oil giants. 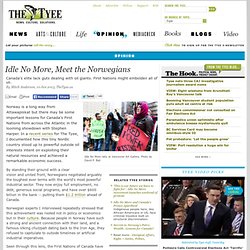 First Nations might embolden all of us. Idle No More rally at Vancouver Art Gallery. Photo by David P. Ball. Scandinavian-Style Sustainability. How did Cool Denmark become so hot? Borgen Created by Adam PriceAztec DVD | $44.95Screens on SBS from 24 April How to Be Danish By Patrick KingsleyShort Books | $24.95 THE Danish political drama Borgen tells the story of Denmark’s first female prime minister as she moves inexorably from sanguine idealism to expedient pragmatism. 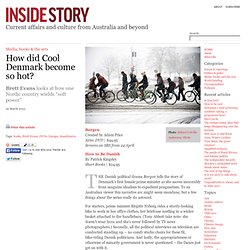 To an Australian viewer this narrative arc might seem mundane, but a few things about the series really do astound. For starters, prime minister Birgitte Nyborg rides a sturdy-looking bike to work in her office clothes, her briefcase nestling in a wicker basket attached to the handlebars. (Tony Abbott take note: she doesn’t wear lycra and she’s never followed by TV news photographers.) Like a real-life Danish PM, Nyborg’s days are mainly taken up with forging and reforging coalitions with Denmark’s other parties to keep her party, the Moderates, in power. 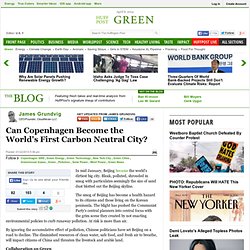 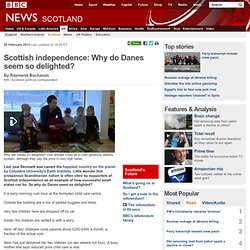 The Apocalypse May Already Be Here, or. . . “Something Is Rotten in the State of Denmark” Many people are concerned about terrible fates that await us in the not-too-distant future. 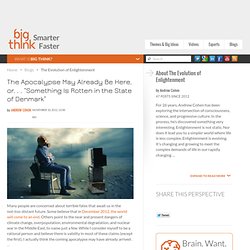 Some believe that in December 2012, the world will come to an end. Others point to the near and present dangers of climate change, overpopulation, environmental degradation, and nuclear war in the Middle East, to name just a few. While I consider myself to be a rational person and believe there is validity in most of these claims (except the first), I actually think the coming apocalypse may have already arrived . . . Let me explain. What Do I Stand For? The Postmodern Predicament - Part 1. What Do I Stand For? The Postmodern Predicament - Part 2. By Andrew Cohen Last week, I published the first in a three-part dialogue between myself and the Danish psychotherapist Ole Vadum Dahl. 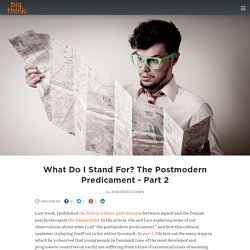 In the article, Ole and I are exploring some of our observations about what I call “the postmodern predicament,” and how this cultural epidemic is playing itself out in his native Denmark. In part 1, Ole laid out the many ways in which he’s observed that young people in Denmark (one of the most developed and progressive countries on earth) are suffering from a kind of existential crisis of meaning and purpose, and attempting to fill this gap in themselves by indulging in vices like alcohol, drugs, and pornography.

In part 2 below, Ole and I start to unpack just how Denmark (and other pockets of progressive culture around the world suffering from similar issues) got into this situation. Dark lands: the grim truth behind the 'Scandinavian miracle' For the past few years the world has been in thrall to all things Nordic (for which purpose we must of course add Iceland and Finland to the Viking nations of Denmark, Norway and Sweden). 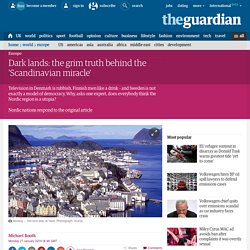 "The Sweet Danish Life: Copenhagen: Cool, Creative, Carefree," simpered National Geographic; "The Nordic Countries: The Next Supermodel", boomed the Economist; "Copenhagen really is wonderful for so many reasons," gushed the Guardian. Whether it is Denmark's happiness, its restaurants, or TV dramas; Sweden's gender equality, crime novels and retail giants; Finland's schools; Norway's oil wealth and weird songs about foxes; or Iceland's bounce-back from the financial abyss, we have an insatiable appetite for positive Nordic news stories. After decades dreaming of life among olive trees and vineyards, these days for some reason, we Brits are now projecting our need for the existence of an earthly paradise northwards.

With New Constitution, Post-Collapse Iceland Inches Toward Direct Democracy. Birgitta Jónsdóttir, a member of the Icelandic parliament, at the Open Government Camp 2011. In a conversation with Truthout she insisted she doesn't want "the new constitution to be plagued with (bureaucrats') language, but the language of the people.

" (Photo: Florian Apel-Soetebeer / Government 2.0 Netzwerk Deutschland)When the global financial system crumbled over four years ago, Iceland played host to one of the most dramatic economic collapses in modern history. Its three largest banks were unable to refinance debt roughly ten times the size of the country's gross domestic product (GDP), causing one of the world's wealthiest nations to limp with hat in hand to the International Monetary Fund (IMF). The island became a symbol for capitalism's systemic failure. Most recently, on October 20, a remarkable constitution - written by an elected council with help from the public - took a step closer toward ratification after it was approved in a referendum by a 2-1 margin.