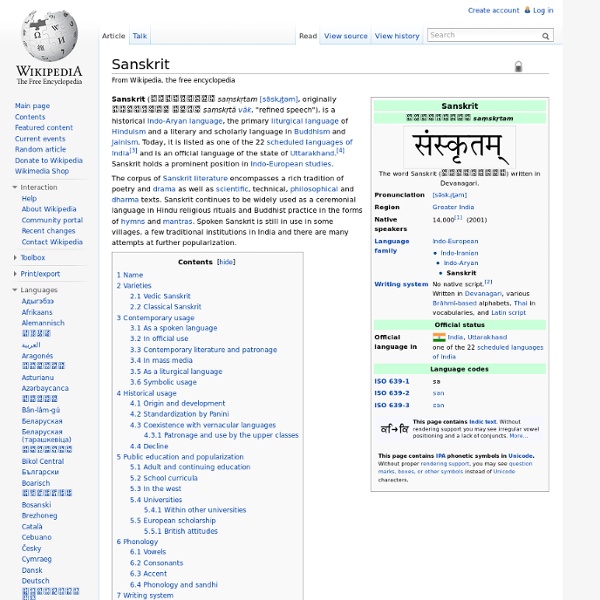 Sanskrit (/ˈsænskrɪt/; संस्कृतम् saṃskṛtam [səmskr̩t̪əm], originally संस्कृता वाक् saṃskṛtā vāk, "refined speech") is the primary liturgical language of Hinduism, a philosophical language in Hinduism, Buddhism, and Jainism, and a scholarly literary language that was in use as a lingua franca in the Indian cultural zone. It is a standardized dialect of Old Indo-Aryan, originating as Vedic Sanskrit and tracing its linguistic ancestry back to Proto-Indo-Iranian and ultimately to Proto-Indo-European. Today it is listed as one of the 22 scheduled languages of India[3] and is an official language of the state of Uttarakhand.[4] Sanskrit holds a prominent position in Indo-European studies. The corpus of Sanskrit literature encompasses a rich tradition of poetry and drama as well as scientific, technical, philosophical and dharma texts. Name The Sanskrit verbal adjective sáṃskṛta- may be translated as "put together, constructed, well or completely formed; refined, adorned, highly elaborated". Related:  Just So: An Odyssey into the Cosmic Web of Connection, Play, and True Pleasure • The problems with philosophy

Ninety-five Theses - Wikipedia Background[edit] Martin Luther, professor of moral theology at the University of Wittenberg and town preacher, wrote the Ninety-five Theses against the contemporary practice of the church with respect to indulgences. In the Catholic Church, indulgences are part of the economy of salvation. In this system, when Christians sin and confess, they are forgiven and will no longer receive eternal punishment in hell, but may still be liable to temporal punishment. This punishment could be satisfied by the penitent performing works of mercy. Woodcut of an indulgence-seller in a church from a 1521 pamphlet Popes are empowered to grant plenary indulgences, which provide complete satisfaction for any remaining temporal punishment due to sins, and these were purchased on behalf of people believed to be in purgatory. In 1515, Pope Leo X granted a plenary indulgence intended to finance the construction of St. Content[edit] 1525 woodcut of forgiveness from Christ outweighing the pope's indulgences [edit]

Avatar An avatar (Sanskrit: अवतार, IAST: avatāra), a concept in Hinduism that means "descent", is the material appearance or incarnation of a deity on earth.[1][2] The relative verb to "alight, to make one's appearance" is sometimes used to refer to any guru or revered human being.[3] The word avatar does not appear in the Vedic literature,[5] but appears in verb forms in post-Vedic literature, and as a noun particularly in the Puranic literature after the 6th century CE. Despite that, the concept of an avatar is compatible with the content of the Vedic literature like the Upanishads as it is symbolic imagery of the Saguna Brahman concept in the philosophy of Hinduism. The Rigveda describes Indra as endowed with a mysterious power of assuming any form at will.[7][8] The Bhagavad Gita expounds the doctrine of Avatara but with terms other than avatar. Incarnation concepts similar to avatar are also found in Buddhism, Christianity,[5] and other religions. Etymology and meaning[edit] Types[edit]

Jainism Ancient Indian religion originating in the Indian subcontinent Jainism (), traditionally known as Jain Dharma, is an ancient Indian religion. The three main pillars of Jainism are ahiṃsā (non-violence), anekāntavāda (non-absolutism), and aparigraha (non-attachment). Jains take five main vows: ahiṃsā (non-violence), satya (truth), asteya (not stealing), brahmacharya (sexual continence), and aparigraha (non-possessiveness). Jainism traces its spiritual ideas and history through a succession of twenty-four leaders or Tirthankaras, with the first in the current time cycle being Rishabhadeva, whom the tradition holds to have lived millions of years ago; the twenty-third tirthankara Parshvanatha, whom historians date to 9th century BCE; and the twenty-fourth tirthankara, Mahavira around 600 BCE. Beliefs and philosophy[edit] The hand symbolizes Ahiṃsā, the wheel dharmachakra, the resolve to halt saṃsāra (transmigration). Dravya (Substance)[edit] Tattva (Reality)[edit] Soul and karma[edit] God[edit]

Saṃsāra Cycle of death and rebirth Saṃsāra or Sansar (Devanagari: संसार) is a Sanskrit word that means "wandering" or "world", with the connotation of cyclic, circuitous change. It is also the concept of rebirth and "cyclicality of all life, matter, existence", a fundamental belief of most Indian religions.[3][4] In short, it is the cycle of death and rebirth.[5] Saṃsāra is sometimes referred to with terms or phrases such as transmigration, karmic cycle, reincarnation, and "cycle of aimless drifting, wandering or mundane existence".[6] Etymology and terminology[edit] Saṃsāra (Devanagari: संसार) means "wandering", as well as "world" wherein the term connotes "cyclic change". Saṃsāra, a fundamental concept in all Indian religions, is linked to the karma theory and refers to the belief that all living beings cyclically go through births and rebirths. The word Samsara is related to Saṃsṛti, the latter referring to the "course of mundane existence, transmigration, flow, circuit or stream".[19]

Codex Gigas The Codex Gigas (English: Giant Book) is the largest extant medieval manuscript in the world.[1] It is also known as the Devil's Bible because of a large illustration of the devil on the inside and the legend surrounding its creation. It is thought to have been created in the early 12th century in the Benedictine monastery of Podlažice in Bohemia (modern Czech Republic). It contains the Vulgate Bible as well as many historical documents all written in Latin. Eventually finding its way to the imperial library of Rudolf II, the entire collection was taken as war booty by the Swedish in 1648 during the Thirty Years' War, and the manuscript is now preserved at the National Library of Sweden in Stockholm, on display for the general public.[2] Description[edit] The codex is bound in a wooden folder covered with leather and ornate metal. Legend has it, that it was written by one scribe.[6] Acts 12:25 reads ab Hierosolymis (= ἀπὸ Ἰερουσαλὴμ, i.e. History[edit] Content[edit] Legend[edit]

Krishna Major deity in Hinduism The anecdotes and narratives of Krishna's life are generally titled as Krishna Leela. He is a central character in the Mahabharata, the Bhagavata Purana and the Bhagavad Gita, and is mentioned in many Hindu philosophical, theological, and mythological texts.[14] They portray him in various perspectives: a god-child, a prankster, a model lover, a divine hero, and as the universal supreme being.[15] His iconography reflects these legends, and shows him in different stages of his life, such as an infant eating butter, a young boy playing a flute, a young boy with Radha or surrounded by women devotees, or a friendly charioteer giving counsel to Arjuna.[16] The synonyms of Krishna have been traced to 1st millennium BCE literature.[17] In some sub-traditions, Krishna is worshipped as Svayam Bhagavan, and this is sometimes referred to as Krishnaism. Names and epithets[edit] As a name of Vishnu, Krishna is listed as the 57th name in the Vishnu Sahasranama. Coins[edit]

Ambiguity The concept of ambiguity is generally contrasted with vagueness. In ambiguity, specific and distinct interpretations are permitted (although some may not be immediately obvious), whereas with information that is vague, it is difficult to form any interpretation at the desired level of specificity. Context may play a role in resolving ambiguity. For example, the same piece of information may be ambiguous in one context and unambiguous in another. Linguistic forms[edit] Structural analysis of an ambiguous Spanish sentence:Pepe vio a Pablo enfurecidoInterpretation 1: When Pepe was angry, then he saw PabloInterpretation 2: Pepe saw that Pablo was angry.Here, the syntactic tree in figure represents interpretation 2. The context in which an ambiguous word is used often makes it evident which of the meanings is intended. More problematic are words whose senses express closely related concepts. Lexical ambiguity is contrasted with semantic ambiguity. Music[edit] Visual art[edit] Expressions[edit] .

Buddhism Religion founded by the Buddha Buddhism (, ) is an Indian religion based on a series of original teachings attributed to Gautama Buddha. It originated in ancient India as a Sramana tradition sometime between the 6th and 4th centuries BCE, spreading through much of Asia. Two major extant branches of Buddhism are generally recognized by scholars: Theravāda (Pali: "The School of the Elders") and Mahāyāna (Sanskrit: "The Great Vehicle"). Life of the Buddha Ancient kingdoms and cities of India during the time of the Buddha (circa 500 BCE) – modern-day India, Pakistan, Bangladesh and Afghanistan Enlightenment of Buddha, Kushan dynasty, late 2nd to early 3rd century CE, Gandhara. Buddhism is an Indian religion[16] founded on the teachings of Gautama Buddha, a Śramaṇa also called Shakyamuni (sage of the Shakya's), or "the Buddha" ("the Awakened One"), who lived c. 5th to 4th century BCE. Worldview The term "Buddhism" is an occidental neologism, commonly (and "rather roughly" according to Donald S.

Masoretic Text - Wikipedia It was primarily copied, edited and distributed by a group of Jews known as the Masoretes between the 7th and 10th centuries of the Common Era (CE). The oldest extant manuscripts date from around the 9th century.[3] The Aleppo Codex (once the oldest-known complete copy but now missing the Torah) dates from the 10th century. The Masoretic Text defines the Jewish canon and its precise letter-text, with its vocalization and accentuation known as the Masorah. The ancient Hebrew word mesorah (מסורה, alt. מסורת) broadly refers to the whole chain of Jewish tradition (see Oral law), which is claimed (by Orthodox Judaism) to be unchanged and infallible. Modern scholars seeking to understand the history of the Tanakh’s text use a range of sources other than the Masoretic Text.[4] These include early Greek (Septuagint) and Syriac (Peshitta) translations, the Samaritan Pentateuch, the Dead Sea Scrolls and quotations from rabbinic manuscripts. Origin and transmission[edit] Second Temple period[edit]

Related:
Related:  Just So: An Odyssey into the Cosmic Web of Connection, Play, and True Pleasure   -  The problems with philosophy