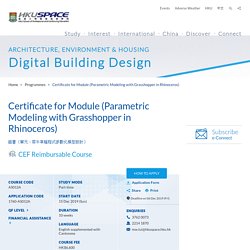 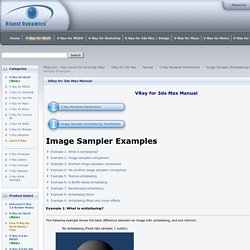 The following example shows the basic difference between an image with antialiasing, and one without: The left images are jagged around the edges of the sphere, while the right are smooth. Here are close-ups of the two images: Example 2: Image samplers comparison Here are some examples demonstrating the quality vs speed of the image samplers. The first example is a normal smooth image (no blurry effects), click the images for a larger view: Both the two-level and the adaptive subdivision samplers are substantially faster than the fixed rate sampler. Example3: Another image samplers comparison Note: the Sponza Atrium model is created by Marko Dabrovic ( and is one of the models for the CGTechniques Radiosity competition. Wolfram MathWorld: The Web's Most Extensive Mathematics Resource. ARCH713, Re-skinning. This project addresses the diverse climactic conditions of Chicago. 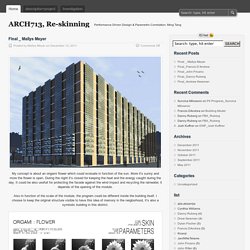 It uses two skins, one with an operable window system, and the other with an operable shading system, to open and close, in order to moderate the internal conditions. Both systems use The following quote reflects my philosophy of generative design. I design a system at the detail level that will react to specific factors found at the site level. Cgi.tutsplus. Grasshopper Masterclass with David Rutten - 01 - Overview of Data Trees on Vimeo. HEM functions. HEM functions Posted by trevor.patt on 03/22/2013 · 4 Comments Offset, Distance, and Walk over Half-Edge Mesh Presented here are three functions for working with Half-Edge Meshes in Grasshopper. 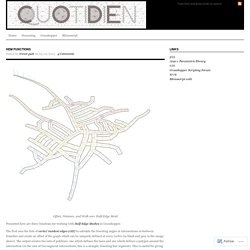 The first uses the lists of vertex’ incident edges (vIE) to calculate the bisecting angles at intersections in-between branches and create an offset of the graph which can be uniquely defined at every vertex (in black and grey in the image above). The output creates two sets of polylines: one which defines the faces and one which defines a polygon around the intersection (in the case of two-segment intersections, this is a straight, bisecting line segment). The second function analyses the distance of every edge to a point at one of the nodes over the graph (red-yellow-blue gradient in the image above). This example, using the street network of Lausanne has over 12600 half-edges. Grasshopper Definition (.gh download, and Rhino5 base .3dm) Like this: Like Loading... Learn parametric design, architectural design. RhinoCAM on Vimeo. Router « dFAB. 2.5 Axis Operations 3 Axis Operations Hole Operations Miscellaneous Resources. 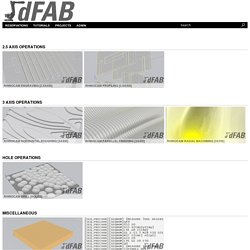 Start [CAP FabLab Wiki] V-Ray Option Editor and Preset ToolBar - V-Ray 2.0 for SketchUp - Chaos Group Help. What Does a Brick Want to Be? We were requested to create a definition that maps bricks onto a vertical surface and changes spacing between the bricks based on views. 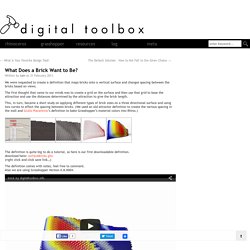 The first thought that came to our minds was to create a grid on the surface and then use that grid to base the attraction and use the distances determined by the attraction to give the brick length. This, in turn, became a short study on applying different types of brick sizes on a three directional surface and using two curves to affect the spacing between bricks. (We used an old attractor definition to create the various spacing in the wall and Giulio Piacentino‘s definition to bake Grasshopper’s material colors into Rhino.) The definition is quite big to do a tutorial, so here is our first downloadable definition. download here: surfaceBricks.ghx (right click and click save link…) The definition comes with notes, feel free to comment.