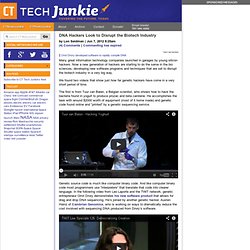 Now a new generation of hackers are starting to do the same in the bio sciences, developing new software programs and techniques that are set to disrupt the biotech industry in a very big way. We found two videos that show just how far genetic hackers have come in a very short period of time. The first is from Tuur van Balen, a Belgian scientist, who shows how to hack the bacteria found in yogurt to produce prozac and beta carotene. Printing artificial bone. Researchers working to design new materials that are durable, lightweight and environmentally sustainable are increasingly looking to natural composites, such as bone, for inspiration: Bone is strong and tough because its two constituent materials, soft collagen protein and stiff hydroxyapatite mineral, are arranged in complex hierarchical patterns that change at every scale of the composite, from the micro up to the macro. 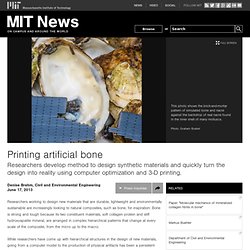 While researchers have come up with hierarchical structures in the design of new materials, going from a computer model to the production of physical artifacts has been a persistent challenge. This is because the hierarchical structures that give natural composites their strength are self-assembled through electrochemical reactions, a process not easily replicated in the lab. Now researchers at MIT have developed an approach that allows them to turn their designs into reality. Daisy Ginsberg: Synthetic aesthetics. LED Eyelashes by Soomi Park. Although still just a concept, the LED Eyelash project by Soomi Park explores the desire that women have for large eyes. 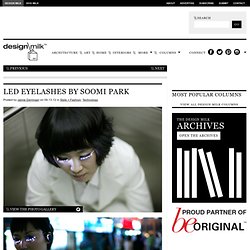 According to the designer, few Asian women are born with naturally large eyes, and most women have a desire for big eyes because they equate it with beauty. Some women even resort to plastic surgery to help make their eyes look larger, which Soomi calls “the fetish of Big Eyes.” In the future, perhaps we can all have big eyes, or be “more beautiful”, with LED Eyelashes, devices similar to fake eyelashes. The device has an inclination sensor with mercury to turn it on/off and flickers with your pupil and eyelid movements. Seems kind of scary to me, yet also very intriguing and fun. Chinese Scientists Successfully Produce a Living Kidney Using a 3D Printer. We’ve all seen the cool things that can be done with 3D printers, but now scientists at a Chinese university in eastern Zhejiang Province have made an incredible leap for medical technology by producing a 3D printed kidney that they say can function as a human organ. 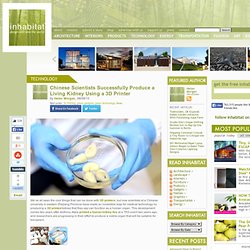 Sploid.gizmodo. Shaved. 'Terminator' arm is world's most advanced prosthetic limb. Pig hearts could be transplanted into humans after baboon success. "If successful, this method could change the current transplant paradigm, eliminating the shortage of donor organs including hearts, livers, kidneys, intestine, as well as insulin producing cells for treatment of diabetes. 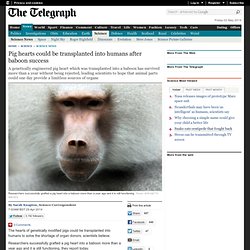 " At present people needing a heart transplant must wait until a suitable donor heart becomes available. Last year 145 operations were carried out at seven hospitals in Britain. However, only eight out of 10 people in the UK receive the transplant they needed because of a lack of suitable donors. Invisible. Chinese man can't afford prosthetics, builds own bionic arms. Eight years ago, Sun Jifa was the victim of a homemade bomb explosion that cost him both his arms. 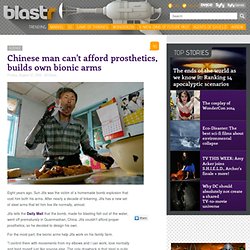 After nearly a decade of tinkering, Jifa has a new set of steel arms that let him live life normally, almost. Jifa tells the Daily Mail that the bomb, made for blasting fish out of the water, went off prematurely in Guanmashan, China. Jifa couldn't afford proper prosthetics, so he decided to design his own. For the most part, the bionic arms help Jifa work on his family farm. "I control them with movements from my elbows and I can work, love normally and feed myself just like anyone else. What's the 51-year-old Jifa's next move? Teen Uses 3D Printer to Make Robotic Prosthetic Arms for $500. It seems that 3D printers can be used to create just about anything, from fully functional guns to super skittish robots. 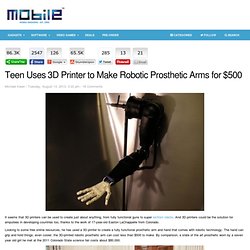 And 3D printers could be the solution for amputees in developing countries too, thanks to the work of 17-year-old Easton LaChappelle from Colorado. Looking to some free online resources, he has used a 3D printer to create a fully functional prosthetic arm and hand that comes with robotic technology. The hand can grip and hold things; even cooler, the 3D-printed robotic prosthetic arm can cost less than $500 to make. By comparison, a state of the art prosthetic worn by a seven year old girl he met at the 2011 Colorado State science fair costs about $80,000. The 3D printed arm by LaChappelle can be controlled using an EEG headband, which measures brain waves. The Colorado teenager showed off his 3D printed arm at TEDxMileHigh.

Handie prosthetic uses 3D printing and smartphones for much cheaper bionic hands (video) I Wanna Deliver A Dolphin... synthetic biology project by Ai Hasegawa. Design Frontiers: The possibilities of bioprinting. Can our bodies become another everyday material for designers to work with? 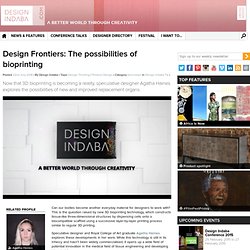 This is the question raised by new 3D bioprinting technology, which constructs tissue-like three-dimensional structures by dispensing cells onto a biocompatible scaffold using a successive layer-by-layer printing process similar to regular 3D printing. Speculative designer and Royal College of Art graduate Agatha Haines explores these developments in her work. While this technology is still in its infancy and hasn't been widely commercialised, it opens up a wide field of potential innovation in the medical field of tissue engineering and developing biomaterials.

Animals cells could be used to make "Frankenstein-esque hybrid organs" This synthetic biology project by design graduate Agatha Haines proposes using animal cells to print new types of organs, which could be implanted into humans to prevent heart attacks or strokes (+ movie) Agatha Haines' graduation project from the RCA's Design Interactions course is called Circumventive Organs and illustrates how "Frankenstein-esque hybrid organs could be put together using cells from different body parts or even different species. 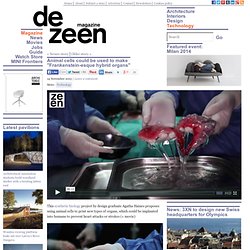 " The project proposes using cells from animals such as rattlesnakes, leeches or electric eels to create organs that could perform tasks like kick-starting the heart following a heart attack or thinning blood clots on the brain. New 'Exosuit' To Take Ocean Divers To Stupendous Depths (PHOTO, VIDEO, INFOGRAPHIC) Firefighter Exoskeleton To The Rescue. The average weight of a firefighter’s “turnout” gear is around 50 pounds, and can get up to 75, 100 or even 125 pounds for emergencies like wildfires or water rescues. 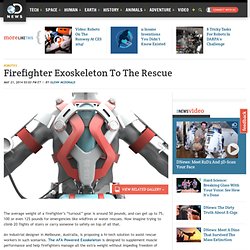 Now imagine trying to climb 20 flights of stairs or carry someone to safety on top of all that. An industrial designer in Melboune, Australia, is proposing a hi-tech solution to assist rescue workers in such scenarios. The AFA Powered Exoskeleton is designed to supplement muscle performance and help firefighters manage all the extra weight without impeding freedom of movement.