AModelingApplication2. Consequences of ratio-dependent predation by wolves for elk population dynamics. Wolf and elk predator prey dynamics in Banff National Park. Study questions link between increases in Lyme disease and deer. We often blame white-tailed deer and the deer ticks they carry for spreading Lyme disease in the United States, especially from Minnesota to New England to Northern Virginia. 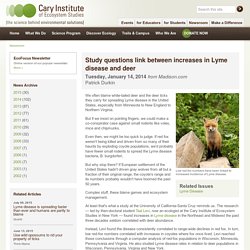 But if we insist on pointing fingers, we could make a co-conspirator case against small rodents like voles, mice and chipmunks. Even then, we might be too quick to judge. If red fox weren't being killed and driven from so many of their haunts by exploding coyote populations, we'd probably have fewer small rodents to spread the Lyme disease bacteria, B. burgdorferi. But why stop there? If European settlement of the United States hadn't driven gray wolves from all but a fraction of their original range, the coyote's range and its numbers probably wouldn't have boomed the past 50 years.

Complex stuff, these blame games and ecosystem management. At least that's what a study at the University of California-Santa Cruz reminds us. Instead, Levi found the disease consistently correlated to range-wide declines in red fox. Callanetal2013. Yellowstone pronghorn find sanctuary in the shadow of the wolf. Up the valley of Yellowstone National Park’s Lamar River there was a sight we had never recalled witnessing. 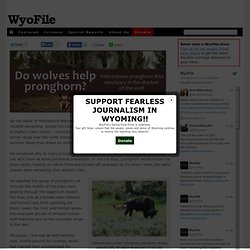 Across the river, on the edge of a herd of bison, was a group of pronghorn (also known – incorrectly — as antelope). They were many miles from their winter range near the north entrance at Gardiner, and barely within the outer limits of a summer range map drawn by wildlife biologists. We wondered why so many pronghorn had drifted this far east, and if maybe they hung out with bison as some protective precaution. In the old days, pronghorn would follow the bison herds, feeding on native forbs and shrubs left ungrazed by the bison. Here, the same players were reenacting their ancient roles.

Yellowstone’s current pronghorn population ranges around 300, far below levels seen in the last century. Of course – this was all wolf territory now, hostile ground for coyotes, which had roamed here unchallenged for decades until wolves returned in 1995. Fluctuating Populations. Evidence is that wolves are protecting pronghorn with their hostility to coyotes. Presence of wolves helps survival of pronghorn fawn, normally a major prey item for coyotes- Wolves have a complicated relationship to their prey and to competing carnivores and omnivores such as bears. 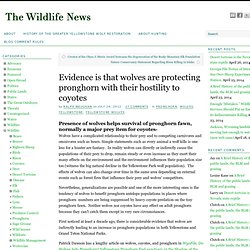 Simple statements such as every animal a wolf kills is one less for a hunter are fantasy. In reality wolves can directly or indirectly cause the populations of their prey to drop, remain steady or even increase as they exert their many effects on the environment and the environment influences their population size too (witness the big natural decline in the Yellowstone Park wolf population). The effects of wolves can also change over time in the same area depending on external events such as forest fires that influence their prey and wolves’ competitors. First noticed at least a decade ago, there is considerable evidence that wolves are indirectly leading to an increase in pronghorn populations in both Yellowstone and Grand Teton National Parks. Elk Calf Survival and Mortality Following Wolf Restoration to Yellowstone National Park. Stream hydrology limits recovery of riparian ecosystems after wolf reintroduction. + Author Affiliations + Author Notes ↵† Present address: Conservation Biology Division, Northwest Fisheries Science Center, National Marine Fisheries Service, National Ocean and Atmospheric Administration, 2725 Montlake Blvd E, Seattle, WA 98112, USA. 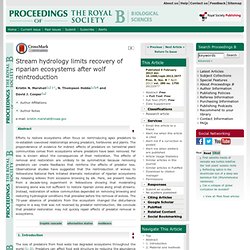 E-mail: kristin.marshall@noaa.gov Abstract Efforts to restore ecosystems often focus on reintroducing apex predators to re-establish coevolved relationships among predators, herbivores and plants. 1. The loss of predators from food webs has degraded ecosystems throughout the world [1–3]. Many examples of trophic cascades have come from studies documenting the effects of predator removal [2,3,13,14]. By dramatically restructuring the food web, the reintroduction of the grey wolf (Canis lupus) to the landscapes of the northern range of Yellowstone National Park created an unprecedented opportunity to understand how restoring predators acts to change the state of an ecosystem. 2.

Figure 1. Ecological Influences of Canis lupus arctos. Reintroducing wolves is only effective at large scales. It is a rule in ecology that big animals outcompete little animals. 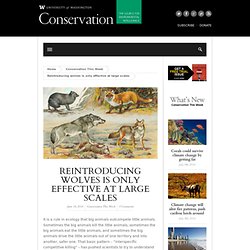 Sometimes the big animals kill the little animals, sometimes the big animals eat the little animals, and sometimes the big animals drive the little animals out of one territory and into another, safer one. That basic pattern – “interspecific competitive killing” – has pushed scientists to try to understand how large carnivores shape entire ecosystems. That apex predators are critical to maintain a healthy ecosystem isn’t all that surprising. At least not anymore. When wolves were exterminated from most of the lower United States, a set of perhaps unexpected consequences followed: deer numbers increased, which meant that plant populations declined. But studies of wolves’ impact on ecosystems like Yellowstone National Park don’t typically cover all that much land, relatively speaking. Researchers Thomas M. In North America, wolves are known to kill coyotes, and coyotes are known to kill red foxes.