Coyote Carnage: The Gruesome Truth about Wildlife Killing Contests. Why the eastern coyote should be a separate species: the 'coywolf' There is considerable debate and disagreement among scientists over what to call a canid inhabiting the northeastern United States. 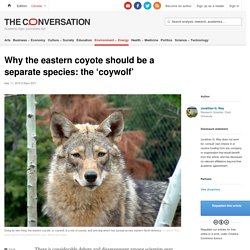 In the course of this creature’s less than 100-year history, it has been variously called coyote, eastern coyote, coydog, Tweed wolf, brush wolf, new wolf, northeastern coyote and now coywolf, with nature documentaries highlighting recent genetic findings. Recently, Roland Kays penned an interesting article in The Conversation concluding that “coywolf is not a thing,” and that it should not be considered for species status. Interestingly, and perhaps ironically, the beautiful light orangey-red canid in the cover picture of that article looks nothing like a western coyote and has striking observable characteristics of both coyotes and wolves, as well as dogs. » Download & Share. Educational sign Designed for use by agencies, parks departments, and communities, in open space areas with residents who routinely feed ducks, geese and other wildlife, Project Coyote’s DON’T FEED WILDLIFE sign helps educate the public about keeping wildlife wild. 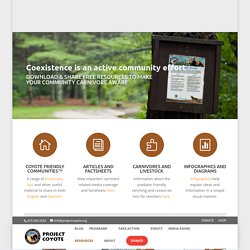 Contact us if you would like to use this sign for your outreach efforts (agency logos at bottom can be tailored to your needs). Project Coyote is making this available FOR FREE as part of our ongoing effort to help expand community educational outreach efforts. Available in English and Spanish. Letter: What science backs coyote killing contests? To the Editor: Kudos to Vermont Rep. 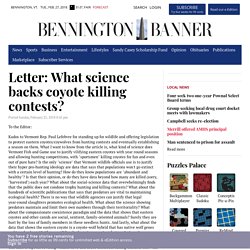 Paul Lefebvre for standing up for wildlife and offering legislation to protect eastern coyotes/coywolves from hunting contests and eventually establishing a season on them. What I want to know from the article is, what kind of science does Vermont Fish and Game use to justify vilifying eastern coyotes with year round seasons and allowing hunting competitions, with "sportsmen" killing coyotes for fun and even out of pure hate? Is the only "science" that Vermont wildlife officials use is to justify their hyper pro-hunting ideology are data that says that populations won't go extinct with a certain level of hunting? Coywolves are Taking Over Eastern North America. People living in Eastern Canada and U.S. are probably familiar with the smart, adaptable wild canine that lives in their forests, neighborhood parks and even cities. 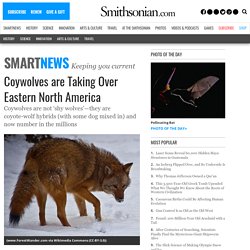 What they may not know is that eastern coyotes aren’t true coyotes at all. They might better be known as hybrids, or coywolves. Coywolves only emerged over the last century or so and have since spread successfully over much of eastern North America, reports Zachary Davies Boren for The Independent. As deforestation, hunting and poisoning depleted the population numbers of eastern wolves, they interbred with western coyotes. Is getting more ‘wolflike&apos; the key to the future for region&apos;s coyotes? PORTLAND, Maine (AP) — The future of the coyotes that roam forests, cities and suburbs from Newfoundland to Virginia, including those right here in Pennsylvania, could hinge on the animals becoming the “wolves” of the East Coast. 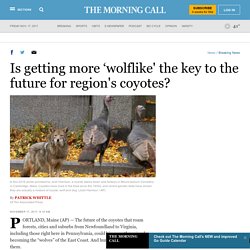 And humans better get used to them. Coyotes have lived in the East since the 1930s, and recent genetic tests have shown they are actually a mixture of coyote, wolf and dog. That's why Eastern coyotes tend to be bigger than their Western cousins. Letter: The chances of wildlife in our backyards has increased. Regarding “Coyotes in North Jersey’s suburbs” (northjersey.com): It’s important for residents to understand that coyotes are common in towns across North America. 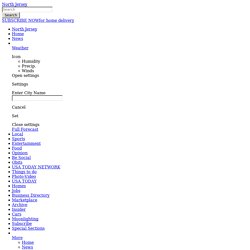 As many of us know, wild territory is shrinking, forcing wildlife to live closer to people. Coyotes can live alone, in pairs or in family groups and may be seen during the day or night. Something Wild: Why Coyotes Seem to be Everywhere. Chris Schadler is a wild canid biologist, and for about 25 years, her specialty has been the coyote. 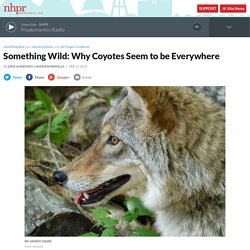 The first confirmed case of coyotes in New Hampshire was an individual found in a trap in Holderness in the mid 1940s. But they have likely been here longer, because as Schadler points out, they didn’t parachute into Holderness, they will have migrated south from Canada. Dave Anderson speaks with wild canid biologist Chris Shadler about coyotes. Our eastern coyote traces its roots to the western coyote, found west of the Mississippi. There are two primary differences between the two species, one is fairly apparent, the eastern is much larger than its western cousin; the other is DNA.

And the coyote returning to New England found a niche to fill with the extirpation in NH of the eastern timberwolf. “It was about ten o'clock at night. Why are they so successful across so many different habitats? Breeding females are only receptive for five days in late January-early February. 10 Fascinating Facts About Urban Coyotes – The Urban Coyote Initiative. Trapping and killing or relocating urban coyotes does not reduce the overall population of coyotes. 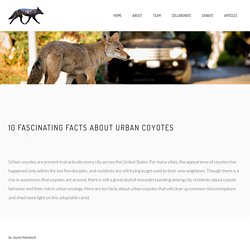 A common reaction from urban and suburban residents when they learn coyotes are living in their area is to ask for the removal of the coyotes, either through lethal means or by trapping and relocating them. However, animal control officers have learned through a lot of experience that this is not only a lot harder to do than it sounds, but it does nothing to reduce the number of coyotes living in an area. In fact, it has the opposite effect. Coyotes are territorial and keep other coyotes out of their home range. The larger the territory of a coyote pack, the fewer coyotes are present overall. Coyote Fact Sheet. BackgroundCoyotes were not originally found in Connecticut, but have extended their range eastward during the last 100 years from the western plains and midwestern United States, through Canada and into the northeastern and mid-Atlantic states. 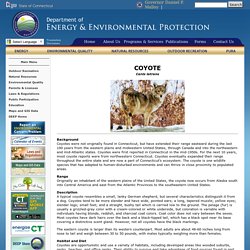 Coyotes were first reported in Connecticut in the mid-1950s. For the next 10 years, most coyote reports were from northwestern Connecticut. Coyotes eventually expanded their range throughout the entire state and are now a part of Connecticut’s ecosystem. The coyote is one wildlife species that has adapted to human-disturbed environments and can thrive in close proximity to populated areas. RangeOriginally an inhabitant of the western plains of the United States, the coyote now occurs from Alaska south into Central America and east from the Atlantic Provinces to the southeastern United States. Coyotes and People: What to Know If You See or Encounter a Coyote : The Humane Society of the United States. 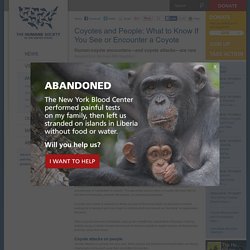 Encourage the return of wolves to New Hampshire by protecting coyotes. Establish non-lethal management policies for coyotes to allow for the return of gray wolves to New Hampshire. Why is this important? According to multiple studies, killing coyotes does not work¹. If we want to protect our livestock, pets and re-establish carnivore populations in the state, we need to move from a lethal-focused management plan to non-lethal management. As coyotes expand their range into areas where wolves once lived and urban sprawl encroaches into wildlife habitat, human-coyote encounters are increasing. When people intentionally or unintentionally feed wild animals or encourage a lack of fear of humans, conflicts can occur. Coyote Conflicts. Skip to main navigation The Eastern coyote is firmly established in New York. They live in New York as an integral part of our ecosystems. People and coyotes can usually coexist if the natural fear of people that coyotes have is maintained.

Pets and young children are typically most at risk. Coyote Fact Sheet. Wildlife Directory: Coyote – Living with Wildlife – University of Illinois Extension. Despite common misconceptions about coyotes, they are not likely to cause problems. However, individuals do sometimes kill or injure domestic pets, young livestock, or poultry. These incidents can typically be prevented by removing resources that attract coyotes and by using exclusion techniques. Make sure livestock and poultry have access to secure shelter and properly fenced areas. Some coyotes become accustomed to human activity and may approach close to buildings, people, or pets. Robert M. Thorson: The Coyotes Are Coming, The Coyotes Are Here. How the Most Hated Animal in America Outwitted Us All. The howl of the coyote is America’s “original national anthem,” says Dan Flores, author of Coyote America: A Natural and Supernatural History.

A totemic animal in Native American mythology, the coyote has lived in North America for more than a million years. But since the early 19th-century, when Lewis and Clark first encountered them, coyotes have been subject to a pitiless war of extermination by ranchers and government agencies alike. Even today, some 500,000 coyotes are killed each year, many shot to death from small planes and helicopters. ‘Coyote America’: a wild, smart predator determined to survive. In “Coyote America: A Natural and Supernatural History,” author and natural historian Dan Flores profiles the coyote, a resilient, intelligent animal that is well-equipped to coexist with humans. ‘Coyote America: A Natural and Supernatural History’ by Dan Flores Basic Books, 271 pp., $27.50. WayCoyoteDenning. How the Most Hated Animal in America Outwitted Us All. Coyotes are here to stay, and author proposes ways to live with them. A coyote on the hunt at Valle de Oro, photographed on March 13, 2015.

(Dean Hanson/Albuquerque Journal) SANTA FE, N.M. — In Tony Hillerman’s 1986 novel “Skinwalkers,” a cat moves into Navajo policeman Jim Chee’s trailer. Theconversation. Coyote Sterilization Program in N.C. Protects Red Wolves. Wild red wolf pups. Image Credit: Ryan Nordsven/USFWS, licensed by cc 2.0 A sterilization program to stop coyotes from hybridizing with the only wild population of red wolves in the world has been successful so far, according to new research. “Coyote genes are under 4 percent in the red wolf genome, so that’s good,” said Eric Gese, a research wildlife biologist with the U.S. Department of Agriculture’s National Wildlife Research Center and lead author of a study recently published in Biological Conservation. The finding is significant and could affect the pending decision by the U.S. Red wolves were declared officially extirpated from the wild by 1980, with USFWS rounding up the remaining animals and putting them into captive breeding programs.

The USFWS and other stakeholders needed a solution. Olguita Sobko: Coyote killing needs to stop. It's coyote pupping season! What you need to know to coexist — The Natural History of the Urban Coyote. Don’t run away. I Am Not A Trophy Sticker – The Echo Syndicate. I AM NOT A TROPHY . Sticker. Part Coyote, Part Wolf, Part Dog: Enter the Coywolf. A new top predator roams the northeastern United States. There's Much to Like About Coyotes. My wife Mary and I volunteered and lived for three winters at the Lamar Buffalo Ranch in the remote northeastern corner of Yellowstone National Park. We drove 14-passenger buses, carrying excited seminar participants over the Lamar Valley’s snow-covered roads in search of wildlife. One sheep rancher's solution to his coyote problem - Home. Some Alberta municipalities pay hunters a fee for every coyote or wolf they kill, and on last week's program we heard a call to end those bounties on coyotes and wolves.

Wolf? Coyote? Coywolf? Understanding Wolf Hybrids Just Got a Bit Easier. In a Nutshell: Eastern wolves, often considered to be a hybrid of gray wolves and coyotes, actually represent a separate species, revealed by the latest genomic research published in Biology Letters. The paper also helps clarify the hybrid origins of other wild canines, including Eastern coyotes and Great Lakes wolves. Unlike Little Red Riding Hood, most of us can tell the difference between a wolf and Grandmother. Project Coyote. John Harrigan: Why hate the coyote but worship the wolf? On a morning enveloped by fog, or maybe a low-flying cloud, I could see no farther than the pasture across the road.

Virginia Tech study shows adaptability of coyotes - Virginia Tech - Mobile. BLACKSBURG — The more coyotes you kill, the more you have. This biological quirk sets these relatively new Virginia residents apart from most other animals in the commonwealth’s forests, fields and even cities, according to Virginia Tech wildlife professor Marcella Kelly. An online service is needed to view this article in its entirety. You need an online service to view this article in its entirety. Foxdenver. Falling in love with the coyote (sort of) Project Coyote.