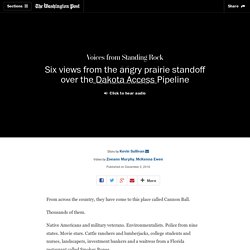 “This isn’t our first rodeo with the forces of genocide,” said Goldtooth, a great-grandfather with long black braids sticking out from under the hooded sweatshirt he wore beneath a canvas Carhartt jacket. Goldtooth sees the pipeline as a threat to the drinking water of thousands downstream. And he sees it as another effort by corporations — backed by the power of the government and expected support of Trump — to trample indigenous people as they have for “hundreds of years of colonial oppression.” 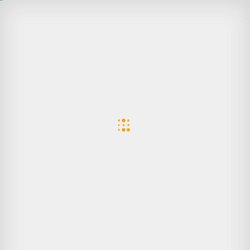 This is especially true in the U.S. -Mexico borderlands because the region lies along a natural boundary as well as a geopolitical border. Where the United States meets Mexico, a 2,000-mile stretch of land bridges the tropical and temperate zones. Campaign Proposals – Ohio University Strategic Social Media. After a thorough analysis, it is clear that COSI’s social media presence needs improving as a whole. 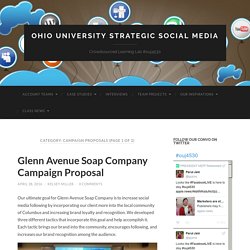 We decided it was necessary to restructure the initial objective of the analysis from increasing awareness of one event, Up All Night, to increasing the awareness of all events at COSI. We plan to do this multiple different ways, such as promoting and broadcasting events more effectively by using social media. Team COSI from left — Jonah Ort, Katie Abbott, Scotty Moore Overall Objective: Increase awareness of COSI’s events by 30% within 3 months by measuring engagement of event-related posts on Instagram, Twitter, and Snapchat. 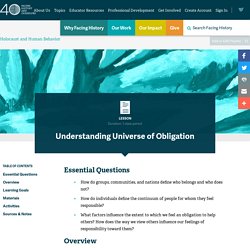 The activities that follow examine what it means to belong by introducing the idea of a “universe of obligation,” the term sociologist Helen Fein coined to describe the circle of individuals and groups within a society “toward whom obligations are owed, to whom rules apply, and whose injuries call for amends.”[1] A society’s universe of obligation can change. Al Jazeera English. When Immigrants Are No Longer Considered Americans. When my grandfather died, in 2014, at ninety-six, my mother asked me if I wanted anything from the small, one-bedroom apartment that he and my grandmother, who had died a few years earlier, shared for nearly their entire American lives. 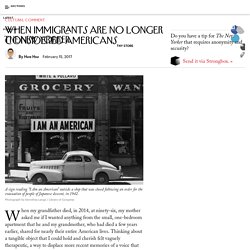 Thinking about a tangible object that I could hold and cherish felt vaguely therapeutic, a way to displace more recent memories of a voice that had hoarsened and a proud handshake that had ceased to be viselike and painful. At some point, he had taken a ceramics class at the local community center. He had come home with a planter in the shape of an Uncle Sam hat. Hyphen-Nation. Watch - Firelight Media. Watch January 19, 2015 Change was coming to America and the fault lines could no longer be ignored—cities were burning, Vietnam was exploding, and disputes raged over equality and civil rights. 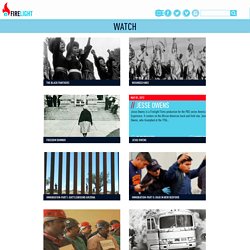 1000+ images about Participatory Art Projects on Pinterest. StoryBlock – StoryBlock is an oral history and visual community archive that celebrates the cultural richness of Kelly Street residents living in the Longwood section of the South Bronx. This project was commissioned by The Laundromat Project's Create Cha. Security Check Required. Orlando Marín- The Last Mambo King by StoryBlock. A Living Room on Roosevelt / Una Sala en La Roosevelt. What makes a safe neighborhood? 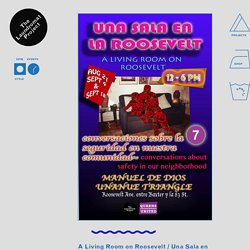 A Living Room on Roosevelt is a collaborative public art project between Queens local and 2016 Create Change Commissions Artist Ro Garrido and Queens Neighborhoods United. This project will bring an interactive living room—a typically private and domestic space—into the commercial corridor of Roosevelt Avenue in Jackson Heights. This site will serve as an intentional space for community members to have conversations, share knowledge and history related to issues of community safety in Jackson Heights. The Laundromat Project. Our community-centered arts education initiatives take place through hands-on art workshops and public programs at local laundromats and other community spaces. 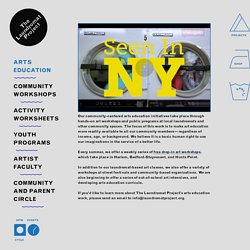 The focus of this work is to make art education more readily available to all our community members— regardless of income, age, or background. What does it mean to be Muslim? There are 1.7 billion answers. Miranda's Story, Motherhood in Prison. Reflections on Incarceration. RSA Shorts - The Power of Empathy. Log In - New York Times. Log In - New York Times. What is a Nation? Lesson: The Refugee Crisis and Human Responsibility. The United Nations reports, “We are now witnessing the highest levels of displacement on record. 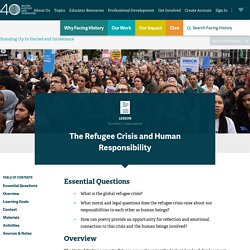 An unprecedented 65.3 million people around the world have been forced from home. Among them are nearly 21.3 million refugees, over half of whom are under the age of 18. There are also 10 million stateless people who have been denied a nationality and access to basic rights such as education, healthcare, employment and freedom of movement . . .; 34,000 people are forcibly displaced every day as a result of conflict or persecution. . . . ”1 This lesson asks students to consider the ethical and legal implications of the global refugee crisis and what those implications mean in terms of our human responsibilities. According to the United Nations High Commission for Refugees, the number of refugees they considered to be “of concern” by the middle of 2015 was already approximately 15.1 million, the most in 20 years. Warsan Shire, "Home" Warsan Shire was born in Kenya, raised in Somalia and lives in London. 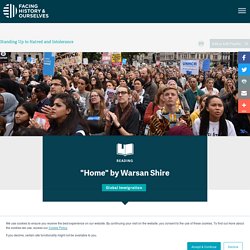 She is a poet, writer, editor and teacher. In 2013-2014, she was the Young Poet Laureate for London. NazneenKane. WATCH: Where Do We Go From Here? Racial Justice Advocates Respond. PHILOSOPHY - Michel Foucault. POLITICAL THEORY - Marx. Rawls' Mature Theory of Social Justice: A Introduction for Students. The use of underscore for emphasis is mine, unless otherwise explicitly noted. --JG 1. Introduction John Rawls is widely regarded as one of the most important political philosophers of the second half of the twentieth century.

Tags: A is for Anarchy, anarchism, capitalism, Class, Theory, What is Class This entry was posted on Friday, December 9, 2016 at 12:49 pm and is poested under A is for Anarchy category. ¡Hasta la pasta compañerxs! Some idiot somewhere once said that all good things have to come to an end. #AskStim. Intersectionality. Login. Login. Talks at the Schomburg: Standing in Formation on Livestream. Standing in Formation will be a provocative and candid conversation that explores the historical, political and contemporary landscape that has generated an analysis and demand for advancing justice focused on black women and girls.

Undeniably, black women have been at the forefront as leaders and workers of all social change reform in the United States and abroad. Beth Richie, professor of African American Studies and Criminology, Law and Justice at University of Illinois at Chicago and author of Arrested Justice: Black Women, Violence, and America's Prison Nation, will join Teresa C. Younger, President and CEO of the Ms. Foundation for Women and a panel of leading scholars and advocates. The panel will investigate the relevance of black women and girls as social change makers that continue to shape the contours of racial justice, feminism, and human rights. This program is co-sponsored by the Sidney Hillman Foundation. @SchomburgCenter | #StandinginFormation. 9780262524827 sch 0001. Internal Migration. Whose Streets Our Streets.

Chinua Achebe on How Storytelling Helps Us Survive History’s Rough Patches. “Those who tell you ‘Do not put too much politics in your art’ are not being honest,” beloved Nigerian novelist Chinua Achebe (November 16, 1930–March 21, 2013) observed in his forgotten 1980 conversation with James Baldwin. “If you look very carefully you will see that they are the same people who are quite happy with the situation as it is… What they are saying is don’t upset the system.” By that point, Achebe had already been busy upsetting the system for more than two decades, beginning with his iconic debut novel Things Fall Apart, which remains the most widely read book in African literature. Now Is the Time to Talk About What We Are Actually Talking About. America has always been aspirational to me. Even when I chafed at its hypocrisies, it somehow always seemed sure, a nation that knew what it was doing, refreshingly free of that anything-can-happen existential uncertainty so familiar to developing nations.