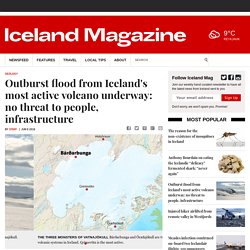 Volcanic eruption influenced Iceland’s conversion to Christianity. A team of scientists and medieval historians, led by the University of Cambridge, has used information contained within ice cores and tree rings to accurately date a massive volcanic eruption, which took place soon after the island was first settled. 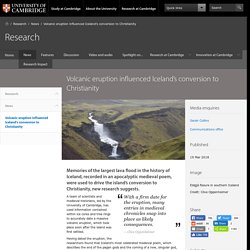 Anyone know any 'political impacts' of eruptions with good examples? Spec demands understanding but we think there are very few decent tang… Iceland's Largest Volcano Bardarbunga May Be Ready to Erupt. By Elaina Zachos Iceland's Bárðarbunga volcano system was racked by four large earthquakes at the end of October. 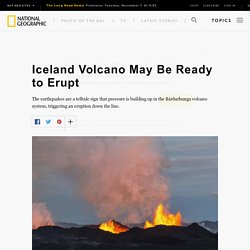 The rumbles, reported as magnitudes 3.9, 3.2, 4.7, and 4.7, are a sign that pressure is building up in the volcano's magma chamber. "Pressure in the system is increasing, that's for sure," says Sara Barsotti, the volcanic hazards coordinator at the Icelandic Meterological Office. This will eventually lead to an eruption, but Barsotti says it’s hard to say when that could happen, or how big the eruption might be. This volcano could be particularly dangerous if it erupts, since it’s sitting partly beneath Europe’s largest ice cap, Vatnajökull. Earthquakes happen when waves of energy move through a solid, says Ben Edwards, a geology professor at Dickinson College in Pennsylvania. "Once a volcano starts erupting, we can track it better than when it's not erupting," Edwards says.

An Active History When might this eruption happen? Current Events "Iceland's ready," Edwards says. How to pronounce the name of Icelandic volcano Öræfajökull. *****Learn how to say Icelandic volcano names. Yellow alert put up for Öræfajökull volcano in #Iceland: it could erupt after 290 years. The glacier over its caldera is sinking… Cut-out 3D volcano model. A simple schematic model of the Eyjafjallajökull volcano summit, crater and ash plume as seen on Blue Peter's Make It. 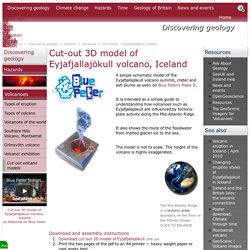 It is intended as a simple guide to understanding how volcanoes such as Eyjafjallajökull are influenced by tectonic plate activity along the Mid-Atlantic Ridge. Eyjafjallajokull and the impact of Icelandic eruptions. Watching Katla: Icelanders plan for next volcanic eruption. Sheila Norman-Culp VIK, Iceland – Sneeze next to the Katla volcano, goes the joke in this Icelandic village, and a seismologist in Reykjavik will analyze the disturbance. 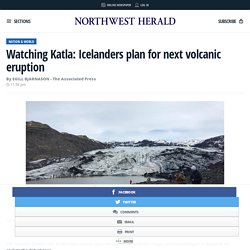 After a summer of increased seismic activity at Katla, Icelanders are obsessing over the smallest sign of an eruption at the country’s most closely watched volcano. Katla last erupted in 1918. Never before in recorded history, dating back to the 12th century, have 99 years passed without an eruption from the volcano. Eight out of the last 10 eruptions at Katla have occurred between September and November, when glacial melting is believed to create conditions for the magma to burst forth.

Vik, a coastal hamlet known for its black sand beach and red-roofed concrete church, is prepared for the worst. Air travelers and visitors to Iceland should also take note. Volcano Watch: A Closer Look At Katla. Hvolsvöllur is a sleepy village in south Iceland, between Hella and Seljalandsfoss. It’s a somewhat forgettable, blink-and-you’ll-miss-it settlement of just a few small hangars and stores, a bank, and a handful houses, all whipped by dust from the steady tourist traffic of Route One. 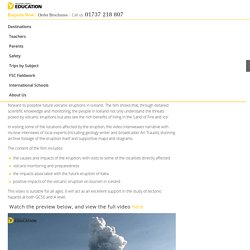 The film shows that, through detailed scientific knowledge and monitoring, the people in Iceland not only understand the threats posed by volcanic eruptions but also see the rich benefits of living in the ‘Land of Fire and Ice’. In visiting some of the locations affected by the eruption, the video interweaves narrative with incisive interviews of local experts (including geology writer and broadcaster Ari Trausti), stunning archive footage of the eruption itself and supportive maps and diagrams.

Iceland on high alert with volcano due to erupt. On top of a wall of blue ice is the outflow of a massive glacier that sits on top of Katla, one of Iceland’s most active volcanoes. 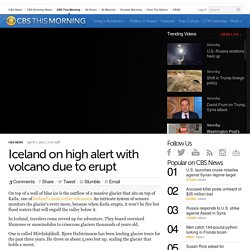 An intricate system of sensors monitors the glacier’s every move, because when Katla erupts, it won’t be fire but flood waters that will engulf the valley below it. In Iceland, travelers come revved up for adventure. They board oversized Humvees or snowmobiles to crisscross glaciers thousands of years old. One is called Mýrdalsjökull. Bjorn Hafsteinsson has been leading glacier tours for the past three years.