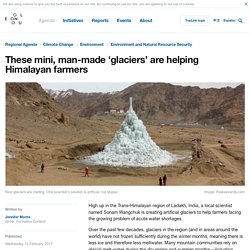 Over the past few decades, glaciers in the region (and in areas around the world) have not frozen sufficiently during the winter months, meaning there is less ice and therefore less meltwater. Many mountain communities rely on glacial melt-water during the dry spring and summer months – including farmers in villages in Ladakh, at around 3,500m above sea level. A bee-friendly path to a healthier future. In Italy, organic farmers are helping to keep pollinators – and crops – flourishing. 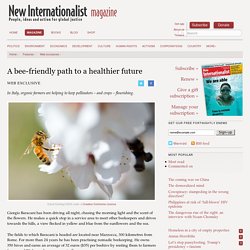 Giorgio Baracani has been driving all night, chasing the morning light and the scent of the flowers. He makes a quick stop in a service area to meet other beekeepers and drives towards the hills, a view flecked in yellow and blue from the sunflowers and the sea. The fields to which Baracani is headed are located near Marzocca, 300 kilometres from Rome. For more than 24 years he has been practising nomadic beekeeping. He owns 350 hives and earns an average of 32 euros ($35) per beehive by renting them to farmers for around 20 days when crops are in flower. 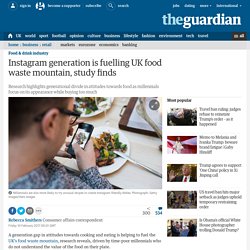 In contrast to savvy older consumers familiar with post-war rationing, the study suggests, those aged 18 to 34 are preoccupied by the visual presentation of food to photograph and share on social media while failing to plan meals, buying too much and then throwing it away. The UK churns out 15m tonnes of food waste a year – of which 7m tonnes come from households. The estimated retail value of this is a staggering £7.5bn, and the government’s waste advisory body, Wrap, calculates that a typical family wastes £700 of food a year. A national supermarket study of the food waste patterns of 5,050 UK consumers, published on Friday, reveals nearly two-fifths of those aged over 65 say they never waste food, compared with just 17% of those under 35.

Fall armyworm 'threatens African farmers' livelihoods' Image copyright CABI Scientists are calling for urgent action to halt the spread of a pest that is destroying maize crops and spreading rapidly across Africa. 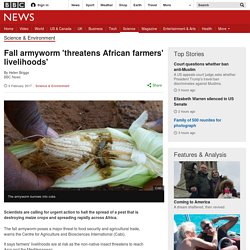 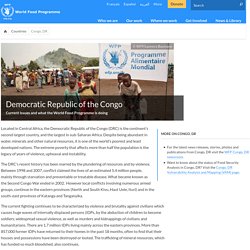 The issue - Global Food Security. The world is facing a potential crisis in terms of food security. 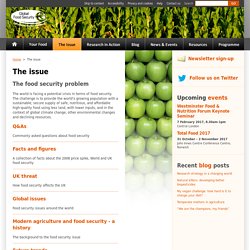 The challenge is to provide the world’s growing population with a sustainable, secure supply of safe, nutritious, and affordable high-quality food using less land, with lower inputs, and in the context of global climate change, other environmental changes and declining resources. Q&As Commonly asked questions about food security. Food security - Global Education. What is food security? 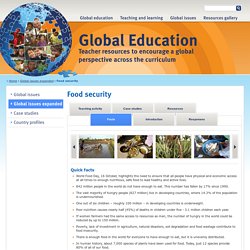 Food security exists when all people, at all times, have physical and economic access to enough safe and nutritious food to meet their dietary needs and food preferences for an active and healthy lifestyle. World Food Summit, 1996. Southern Africa cries for help as El Niño and climate change savage maize harvest. Two-year-old Zeka screams as a health worker measures the circumference of her arm while another holds her legs and presses her flesh. 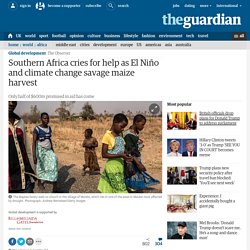 The nurses agree: Zeka has clear signs of edema, a swelling condition caused by extreme hunger. “She will live, but she needs to go to hospital. Your kitchen and the planet: the impact of our food on the environment. The food we eat is responsible for almost a third of our global carbon footprint. 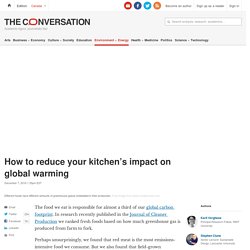 In research recently published in the Journal of Cleaner Production we ranked fresh foods based on how much greenhouse gas is produced from farm to fork. Perhaps unsurprisingly, we found that red meat is the most emissions-intensive food we consume. But we also found that field-grown vegetables produce the least greenhouse gas. For instance, it takes about 50 onions to produce a kilogram of greenhouse gas, but only 44 grams of beef to produce the same amount. We hope that chefs, caterers and everyday foodies will use this information to cook meals without cooking the planet.

In These Colorful ‘Food Maps,’ Nations Are What They Eat. This story appears in the February 2017 issue of National Geographic magazine. 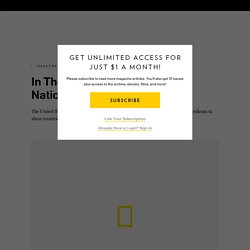 Food for thought: How does one ingredient become linked to one place? That’s one question artists Henry Hargreaves and Caitlin Levin had in mind when they hatched their “food map” series—a collection of country and continent maps made using ingredients synonymous with those regions. Think India rendered in spices, New Zealand in kiwifruit, South America in citrus.

Hunger and food security - United Nations Sustainable Development. Hunger and food securityFlorencia Soto Nino2016-08-17T17:30:56+00:00 Share this story, choose your platform! It is time to rethink how we grow, share and consume our food. If done right, agriculture, forestry and fisheries can provide nutritious food for all and generate decent incomes, while supporting people-centred rural development and protecting the environment. 'We had nothing to give him': the human cost of malnutrition in Maharashtra. The most valuable thing in Devganga Sawra’s hut is a memory card wrapped in lined notepaper and hidden in an earthen pot by the family shrine. The card, barely the size of his fingernail, has the only four images of his youngest son, Vishwarnam. “You have to put this in a computer,” he says. “There are some pictures – two or three. You see, in our village, the tradition is that when someone dies, we bury all their things with them so that they don’t cause the family any more pain.”

Vishwarnam died in his mother’s arms aged two years and two months. “He barely ate,” Devganga says. Agriculture holds the key to tackling water scarcity. Agriculture is both a victim and a cause of water scarcity. Can Congolese Agriculture Fight Future Famines? Solange, a 34-year-old mother, feeds her six children by selling peanuts in the streets of Goma, in the war-ravaged eastern Democratic Republic of the Congo.

She travels one-and-a-half hours each way from her rural village in the outskirts of the city, hoping that she’ll go back home with an empty basket that night. On many days, Solange returns back home with her basket nowhere near empty. But on a good day, she says she can earn a few dollars. We must eat less meat. Could these three alternatives help save our planet? The goal to keep global warming below 2°C, as set out in the Paris Agreement, is an ambitious one which will require new policies, a change in consumer behaviour and technology innovations across a wide range of industries.

The spotlight often falls on those industries traditionally recognized as heavy emitters such as oil and gas, extractives and transport. However, research by Chatham House indicates that without reducing livestock production and consumption, the ambitions of Paris will be impossible. Livestock production, for example, is responsible for 14% of greenhouse emissions - more than the global transport sector. The sector is also a disproportionate user of land and water, and a major contributor to deforestation due to the soya required to produce animal feed.

In the future, will farming be fully automated? Image copyright CNH Industrial. In a California Valley, Healthy Food Everywhere but on the Table. We need a food system that works for everyone, and our planet. This is how we can do it. Smallscale farmers need the spotlight now: Africa Food Prize winner Kanayo Nwanze speaks out at COP22. At vast global gatherings like the COP22 UN climate conference, which has just concluded in Marrakech, the seductive grandeur of the occasion frequently strips attention from the people, in faraway places, who climate change threatens the most. But on Wednesday at the COP, during a panel discussion on how agriculture can support the 2030 Sustainable Development Goal for zero hunger, Kanayo F. Circle of Poison. Filmmakers: Evan Mascagni and Shannon Post In recent decades, harmful pesticides spread around the world's less developed nations have caused immeasurable damage to populations and ecosystems. Corporate capture of African agriculture.

Since 2000, 422 large-scale land acquisitions totalling 10 million hectares – almost the size of the United Kingdom – have controversially been concluded between African governments and foreign investors, largely behind closed doors. Huge deposit of untapped oil could be largest ever discovered in US. A huge deposit of untapped oil, possibly the largest ever discovered in the US, has been identified by the US Geological Survey (USGS) in west Texas. U.S. Food Loss and Waste 2030 Champions. Release No. 0245.16Contact:USDA, Office of Communications(202) 720-4623press@oc.usda.gov Printable version U.S. Syria's food production edging nearer to collapse, UN warns. Surprising Ways to Solve Food Waste. Austin residents and businesses are pitching in to put their leftovers to good use. And there are plenty to go around: Austin annually wastes more than 190 million pounds of food, worth at least $200 million. Nigeria: Hunger crisis could kill 200 children per day - News from Al Jazeera.

Agribusiness can help to unlock the true potential of Africa. What would happen if everyone in the world suddenly stopped eating meat? South Africa faces drought and rising food prices - can GMOs save it? Scientists apply for GM wheat trial in UK. Reality Check: Did a million people use food banks? A new way to tackle hunger could be in the palm of your hand.

Hurricane-ravaged Haiti has 'alarming' levels of hunger and malnutrition. Climate Change Will Change How We Grow Food. Milan leads fight against food waste – with ugly fruit and Michelin-starred soup kitchens. When It Comes to the Hunger Challenge, Producing More Food Isn’t the Only Answer. A map of the hungriest countries in the world. The face of hunger and malnutrition in Venezuela. Africa at LSE – Africa’s Nile basin countries should invest in rain, not big infrastructure projects. Feeding the 9 million, can we do it? Denmark Capitalizes on Culture to Stop Food Waste. Poor food 'risks health of half the world' The UK’s first food waste supermarket opens: in pictures. Thailand: Reclaiming mangroves for shrimp production - News from Al Jazeera. Growing urban agriculture beyond the city limit.

French supermarkets banned from throwing away and spoiling unsold food. Global open data call to deliver world food security. Food economics: What if the world went vegan? Measuring global hunger isn't easy. This new approach wants to change that. How can food security in Africa be achieved? Could urban farming be an oasis in the Tulsa food desert?

The world produces enough food to feed everyone. So why do people go hungry? Nigeria’s food crisis claims hundreds of lives. This map shows where your food really comes from – and it might surprise you. Should we all follow in the footsteps of Italy's first 'vegetarian city'? Those pigs in Westminster: inside London's most central urban farm. Sahara Forest Project - Home - Sundrop. What Would a World Without GMOs Look Like? The future of agriculture. Half of all US food produce is thrown away, new research suggests. Farming and forestry can deliver food security, says UN.