Pediatric Feeding Disorder in Children With Short Bowel Synd... : Journal of Pediatric Gastroenterology and Nutrition. Objective: We aimed to characterize the prevalence of pediatric feeding disorder (PFD) in short bowel syndrome (SBS) and study factors contributing to the persistence of PFD. 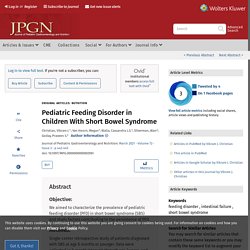 Methods: Single-center retrospective study of patients diagnosed with SBS at age 6 months or younger. Data were collected in 3-month intervals through age 2 years, and every 6 months through age 4 years. Demographic information, anthropometric data, and details regarding nutrition support were recorded and analyzed. Results: We reviewed 28 patients. Discussion: The prevalence of PFD was 100.0%, 76.5%, 68.8%, and 70.0% at 1, 2, 3, and 4 years of age, respectively. 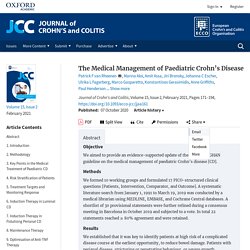 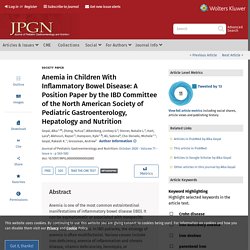 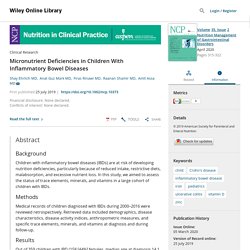 In this study, we aimed to assess the status of trace elements, minerals, and vitamins in a large cohort of children with IBDs. Methods Medical records of children diagnosed with IBDs during 2000–2016 were reviewed retrospectively. Retrieved data included demographics, disease characteristics, disease activity indices, anthropometric measures, and specific trace elements, minerals, and vitamins at diagnosis and during follow‐up. Results Out of 359 children with IBD (158 [44%] females, median age at diagnosis 14.1 years, interquartile range [IQR] 12.0–16.0), 240 (67%) were diagnosed with Crohn's disease (CD) and 119 (33%) with ulcerative colitis (UC). 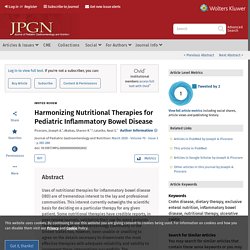 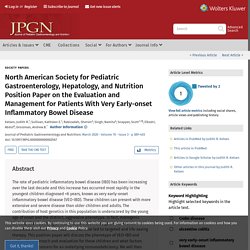 The disease course in this population can be more severe and refractory than older children and adults. Additionally, these children can present with a distinct phenotype (1). The aggressive disease and young age of onset points to a more significant genomic contribution to the disease compared with the polygenic inheritance seen in the older populations.

Indeed, monogenic defects, including genes involved in primary immunodeficiency and intestinal barrier processes, have been identified in children with VEO-IBD (2–7). Importantly, these findings have led to effective targeted therapies (2–4,8). Approximately 6 to 15% of the pediatric IBD population presents at <6 years of age, including, although rare, children diagnosed in the first year of life (9). A very broad range of immunodeficiencies and epithelial cell defects can be associated with VEO-IBD. Radiology Studies. Canadian Association of Gastroenterology Clinical Practice Guideline for the Medical Management of Pediatric Luminal Crohn’s Disease. Use of Biosimilars in Pediatric Inflammatory Bowel Disease:... : Journal of Pediatric Gastroenterology and Nutrition.

What Is Known Before approval of a biosimilar, similarity needs to be proven, instead of efficacy and safety. 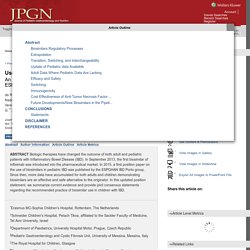 Introduction of biosimilars to the market leads to substantial cost reduction. What Is New A switch from the originator infliximab to CT-P13 may be considered in children with IBD in clinical remission, following at least 3 induction infusions. Multiple switches (>1 switch) between biosimilars and reference drug or various biosimilars are not recommended in children with IBD, as data on interchangeability is limited and traceability of the drugs in case of loss of efficacy and/or safety signals may be compromised. Anti-tumor necrosis factor alpha (TNFα) agents including infliximab (IFX) and adalimumab are monoclonal antibodies approved for the treatment of Crohn disease (CD) and ulcerative colitis (UC) in children as well as for other inflammatory indications. Biosimilars Regulatory Processes Extrapolation. Management of Paediatric Ulcerative Colitis, Part 2: Acute... : Journal of Pediatric Gastroenterology and Nutrition.

What Is Known The previously published European Society of Paediatric Gastroenterology, Hepatology and Nutrition and European Crohn's and Colitis Organization guidelines on acute severe colitis were published in 2011 and are updated herein. 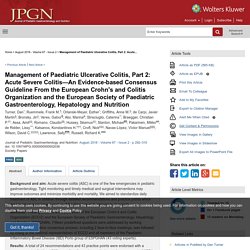 What Is New In addition to providing an update of new literature, several major topics have changed from the previous guidelines. A Paediatric Ulcerative Colitis Activity Index-based algorithm dictates a day-by-day therapeutic and monitoring management; the use of thrombotic prophylaxis has been revisited based on predicting variables; sequential therapy has been newly presented; recommendations for therapeutic drug monitoring have been provided; and other sections updated. With few exceptions, children with ASC should be admitted to hospital for immediate evaluation and intensive medical treatment with intravenous corticosteroids (IVCS). Infectious Screening Recommendations Practice Points Pain Management Nutritional Support Thromboprophylaxis Recommendation. Management of Paediatric Ulcerative Colitis, Part 1: Ambula... : Journal of Pediatric Gastroenterology and Nutrition. What Is Known The previously published European Society of Paediatric Gastroenterology, Hepatology and Nutrition–European Crohn's and Colitis Organization guidelines were published in 2012 and are updated herein. 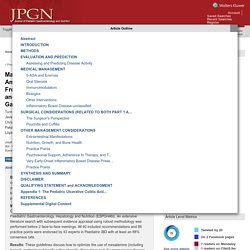 What Is New The diagnosis section has been replaced by the inflammatory bowel disease-classes criteria; a discussion of inflammatory bowel disease-unclassified has been added; fecal calprotectin has been given more emphasis; new drugs (eg, vedolizumab, golimumab) have been incorporated as off-label medications; recommendations for therapeutic drug monitoring have been provided; a treat to target algorithm has been added and other sections updated.

Ulcerative colitis (UC) is a disease with a less heterogeneous phenotype than Crohn disease (CD) but it still poses many unique challenges. The incidence of pediatric onset UC, which constitutes roughly 15% to 20% of all UC, ranges at 1 to 4/100,000/year in most North American and European regions (1). Recommendations Practice Points. Nutrition in Pediatric Inflammatory Bowel Disease: A Positi... : Journal of Pediatric Gastroenterology and Nutrition. What Is Known A growing body of evidence supports the need for detailed attention to nutrition and diet in children with inflammatory bowel disease. 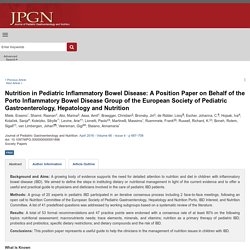 Despite the increasingly recognized importance of the issue, no specific pediatric dietary guidelines have been published to date. NASPGHAN Clinical Report on Postoperative Recurrence in Pedi... : Journal of Pediatric Gastroenterology and Nutrition. What Is Known * Crohn's disease may result in complications that require surgery in children. * Disease recurrence is common after surgery and can lead to subsequent surgical intervention.

What Is New * Children with complicated disease are at higher risk for postoperative recurrence. * Endoscopic recurrence precedes clinical recurrence, and is a better predictor of the risk for future surgery. * Anti-TNF agents appear to be the most effective treatment in preventing postoperative recurrence. * Prophylactic treatment to prevent recurrence rather than treating after the disease recurs, appears to be more effective in preventing further surgery. * Early Postoperative surveillance for disease recurrence allows for a change in management to prevent complications that may lead to further surgery. 2014 ESPGHAN Criteria for the Diagnosis of Inflammatory Bowel Disease in Children and Adolescents.

Until recently, the diagnosis of inflammatory bowel disease (IBD) in childhood, whose subtypes comprise Crohn disease (CD), ulcerative colitis (UC), and IBD-unclassified (IBD-U, a form of colonic IBD whose features make it impossible to define as either colitis of CD or UC at diagnosis), seemed straightforward. The diagnosis of IBD required chronic inflammation in the gastrointestinal (GI) tract and exclusion of other causes of inflammation. The differentiation of CD from UC, and both of these from infectious diseases, allergic diseases, or primary immunodeficiency disorders (PIDs) with similar presentations, was based largely on the clinical suspicion, ruling out other diagnoses, endoscopic and histological evaluation of the mucosa, and small bowel (SB) follow-through (which has limited sensitivity for detecting SB inflammation) (1).

Recommendations Practice Points 1. 2. IBD should be suspected when patients appear with the appropriate symptoms, which may be extremely diverse (10–13). Surgical Management of Crohn Disease in Children: Guideline 2017. The incidence of pediatric Crohn disease (CD), particularly in children 10 to 19 years of age, is increasing and the phenotype is often characterized by extensive inflammation and an aggressive and progressive disease course including growth failure (1–6). Despite optimized treatment, almost one-third of the patients will have complications such as fistulae, strictures, and abscesses, undergoing invasive treatment within 5 years of diagnosis (7,8).