LingSIG Meeting at the 2015 TEI Conference in Lyon. Core survey 3. The third ENUMERATE Core Survey was carried out in the first half of 2015. 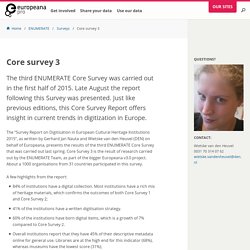 Late August the report following this Survey was presented. Just like previous editions, this Core Survey Report offers insight in current trends in digitization in Europe. The “Survey Report on Digitisation in European Cultural Heritage Institutions 2015”, as written by Gerhard Jan Nauta and Wietske van den Heuvel (DEN) on behalf of Europeana, presents the results of the third ENUMERATE Core Survey that was carried out last spring.

Copyright changes and Slideshare chicanery. There are many different ways to share the content of your presentation slides, but Slideshare has remained my ‘go to’ slide repository, as it aggregates all my presentations that I have chosen to share in the last eight years. 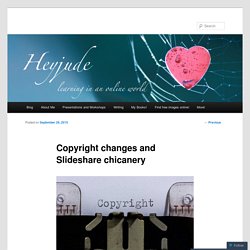 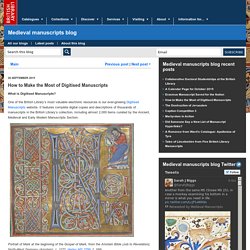 One of the British Library’s most valuable electronic resources is our ever-growing Digitised Manuscripts website. It features complete digital copies and descriptions of thousands of manuscripts in the British Library’s collection, including almost 2,000 items curated by the Ancient, Medieval and Early Modern Manuscripts Section. Portrait of Mark at the beginning of the Gospel of Mark, from the Arnstein Bible (Job to Revelation), North-West Germany (Arnstein), c. 1172, Harley MS 2799, f. 166r Some of the highlights from our collection are the Codex Alexandrinus, the Lindisfarne Gospels, the Articles of the Barons, the Book of Margery Kempe, the Macclesfield Alphabet Book, and Leonardo da Vinci’s notebook.

WE HAVE LIFTOFF!!! The Open Library of Humanities launches today - publishing #openaccess scholarship with no APCs. Celebrate women in science with Wikipedia – Ada Lovelace. Whilst time is unveiling, Science is exploring Nature, by William Skelton (engraver); Charles Reuben Ryley (artist) (The Bodleian Libraries, Oxford) [CC BY 4.0], via Wikimedia Commons This October will mark the bicentenary of Ada Augusta Byron, otherwise known as Ada Lovelace, often called the first computer programmer. 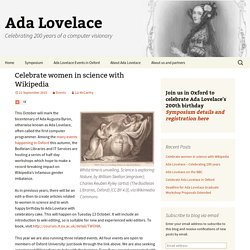 Among the many events happening in Oxford this autumn, the Bodleian Libraries and IT Services are hosting a series of half-day workshops which hope to make a record-breaking impact on Wikipedia’s infamous gender imbalance. As in previous years, there will be an edit-a-thon to create articles related to women in science and to wish happy birthday to Ada Lovelace with celebratory cake. This will happen on Tuesday 13 October. Help us change the face of #Wikipedia with a week of #womeninscience events! ScienceComm'15. The Digital Humanities Are Alive and Well and Blooming: Now What? With the field of digital humanities hitting its stride, higher education institutions need strong, end-to-end, coordinated strategies for managing digital creation. 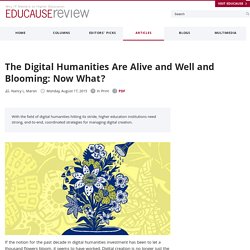 If the notion for the past decade in digital humanities investment has been to let a thousand flowers bloom, it seems to have worked. Digital creation is no longer just the realm of specialists, IT developers, and librarians who manage collections. Today, with digital humanities (DH) hitting its stride, historians, philosophers, and poets not only are learning how to use tools to conduct analysis for their work; they also are building collections, developing their own tools, and constructing platforms.

TEIC/TEI-Simple. Coursera. Compte rendu de colloque: Document Engineering (DocEng) 2015. Scholarlyeditions.commons.mla. Preamble and Statement of Purpose This white paper is intended as a tool for thinking through a set of pressing questions for the MLA’s Committee on Scholarly Editions (CSE) and as a contextualized expression of our current responses to those questions. 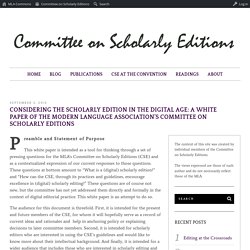 These questions at bottom amount to “What is a (digital) scholarly edition?” And “How can the CSE, through its practices and guidelines, encourage excellence in (digital) scholarly editing?” These questions are of course not new, but the committee has not yet addressed them directly and formally in the context of digital editorial practice. Urges Elsevier to Revise Policy That Impedes Sharing of Scholarship. Image CC-BY-SA by Libby Levi for opensource.comIn April 2015, Elsevier announced a new sharing and hosting policy for Elsevier journal articles, which imposes excessive restrictions on authors and institutions, employs embargo periods that are counter to the requirements established by the Canadian and US governments, and, more fundamentally, impedes the sharing of information by scholars that is so fundamental to the research process. 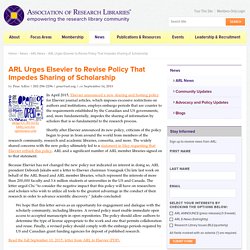 Shortly after Elsevier announced its new policy, criticism of the policy began to pour in from around the world from members of the research community, research and academic libraries, consortia, and more. The widely shared concerns with the new policy ultimately led to a statement in May requesting that Elsevier rethink this policy. ARL and a significant number of ARL member libraries signed on to that statement. Nadia Spang Bovey sur Twitter : "BibUp: scanner réf bibliographiques et extraits de textes depuis son tél - @centre_NTE @unil. BibUp - University of Fribourg. Structuralist Methods in a Post-Structuralist Humanities. The topic of this conference (going on now!) 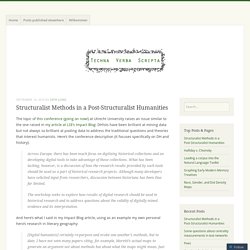 At Utrecht University raises an issue similar to the one raised in my article at LSE’s Impact Blog: DH’ists have been brilliant at mining data but not always so brilliant at pooling data to address the traditional questions and theories that interest humanists. Here’s the conference description (it focuses specifically on DH and history): Glasgow Uni Sp Coll sur Twitter : "Glasgow Incunabula Project update (15/9/15) 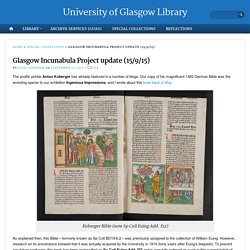 The British Library Puts Over 1,000,000 Images in the Public Domain: A Deeper Dive Into the Collection. Every year for the past decade or so, we‘ve seen new, dire pronouncements of the death of print, along with new, upbeat rejoinders. This year is no different, though the prognosis has seemed especially positive of late in robust appraisals of the situation from entities as divergent as The Onion’s A.V.

Club and financial giant Deloitte. INTRODUCING GIT-LIT &vert; JONATHAN REEVE. A vibrant discussion followed my March 15th post, "A Proposal for a Corpus Sharing Protocol. ". Carrie Schroeder, Allen Riddel and others on Twitter pointed out that, especially in non-English DH fields, many corpora are already on GitHub. These include texts from the Chinese Buddhist Electronic Text Association, the Open Greek and Latin Project at Leipzig, and papyri from the Integrating Digital Papyrology Project.

How to get better at data science. Recently, I finished teaching General Assembly's 11-week data science course for the fourth time. The goal of the course is to enable students to apply the entire data science workflow (using Python) to problems that interest them: forming a question, gathering and cleaning data, exploring and visualizing the data, building and evaluating machine learning models, and communicating results. The typical student is a working professional with some experience working with data, limited programming experience, and basic statistical knowledge. Charlotte Cooper sur Twitter : "Photos of Bodleian MS Fr. D5 uploaded! A (sadly, unillustrated) copy of #ChristinedePizan's Trois Vertus @BDLSS" Medieval Manuscripts sur Twitter : "Some fabulous manuscripts our now online courtesy of @britishlibrary @BLMedieval.

Did Someone Say a New List of Manuscript Hyperlinks? It's that time of year when we update the list of manuscripts published on the British Library's Digitised Manuscripts website. Since spring, more than 30 medieval and early modern manuscripts have been added to our site, and you can find the full listing here: British Library Ancient, Medieval and Early Modern Digitised Manuscripts Master List 10.09.15. 5 things we’ve learned about Digital Humanities in the last 5 years. Learning Theory v5 - What are the established learning theories? The Best UX Articles of September 2015 - Usabilla Blog. At Usabilla, we love to share interesting content from the world of UX & design every day on Twitter.

We also love to look back over the previous month and share our favourites. Flode - Use flow charts that execute to teach computational thinking & programming skills. JRC Data Catalogue – making open science a reality. Research data produced by the JRC or in cooperation with other partners is now publicly available, in support of the European Commission’s strategy on Open Science for improved circulation of knowledge and thus innovation for generating growth. The first version of the JRC Data Catalogue is online and its datasets can be freely consulted and downloaded. This catalogue will also feed into the EU Open Data portal, which is the single point of access to a growing range of data produced by the EU Institutions. Interested users have access to data on a wide range of topics, such as climate, freshwater resources, alien species, soil or forests.

Major biodiversity panel desperately seeks social scientists. Kim Taylor/ naturepl.com The plight of pollinators and their ecosystems was the subject of the first assessment by the intergovernmental biodiversity panel IPBES. A global science body set up to assess the ecological health and biodiversity of the planet is struggling to solve its own lack of diversity: a monoculture of natural scientists on its staff. The Intergovernmental Science-Policy Platform on Biodiversity and Ecosystem Services (IPBES) was established in 2012 to assess scientific and local knowledge on the state of the natural world. From the outset, the United Nations body planned to recruit a mixture of specialists to help to inform its reports: from natural scientists and economists to social scientists, anthropologists, environmental philosophers and indigenous peoples such as fishers and farmers with local knowledge about their environment.

Actualités. The American Historian: New Forms of History: Critiquing Data and Its Representations.