Catégorie:Militantisme par méthode. Slacktivism. Slacktivism (sometimes slactivism or slackervism) is a portmanteau of the words slacker and activism. 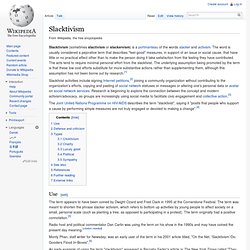 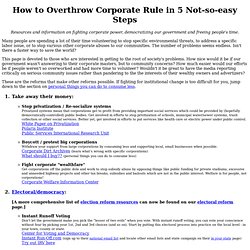 Many people are spending a lot of their time volunteering to stop specific environmental threats, to address a specific labor issue, or to stop various other corporate abuses to our communities. The number of problems seems endless. Pay it forward. Pay it forward is an expression for describing the beneficiary of a good deed repaying it to others instead of to the original benefactor. 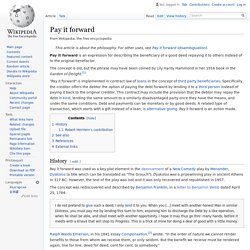 The concept is old, but the phrase may have been coined by Lily Hardy Hammond in her 1916 book In the Garden of Delight.[1] "Pay it forward" is implemented in contract law of loans in the concept of third party beneficiaries. Specifically, the creditor offers the debtor the option of paying the debt forward by lending it to a third person instead of paying it back to the original creditor. This contract may include the provision that the debtor may repay the debt in kind, lending the same amount to a similarly disadvantaged party once they have the means, and under the same conditions.

Debt and payments can be monetary or by good deeds. Tit for tat. In Western business cultures, a handshake when meeting someone is an example of initial cooperation. 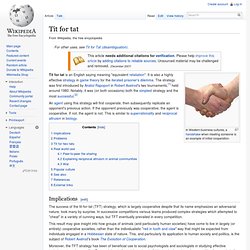 Tit for tat is an English saying meaning "equivalent retaliation". It is also a highly effective strategy in game theory for the iterated prisoner's dilemma. The strategy was first introduced by Anatol Rapoport in Robert Axelrod's two tournaments,[1] held around 1980. Notably, it was (on both occasions) both the simplest strategy and the most successful.[2] 25 Ways To Thrive In The Midst Of Chaos — Life Advices. These times can be challenging. 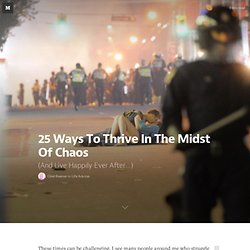 I see many people around me who struggle to just stay afloat and I am struggling with them. Sometimes people say to me they admire my calmness and ask me how I do it. Civilisation 2.0 - Une approche positive de l'actualité scientifique. 6 milliards d'autres. The Activist's Handbook. Critical mass (sociodynamics) In social dynamics, critical mass is a sufficient number of adopters of an innovation in a social system so that the rate of adoption becomes self-sustaining and creates further growth. 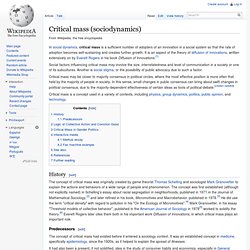 It is an aspect of the theory of diffusion of innovations, written extensively on by Everett Rogers in his book Diffusion of Innovations.[1] Social factors influencing critical mass may involve the size, interrelatedness and level of communication in a society or one of its subcultures. Another is social stigma, or the possibility of public advocacy due to such a factor. Critical mass may be closer to majority consensus in political circles, where the most effective position is more often that held by the majority of people in society. 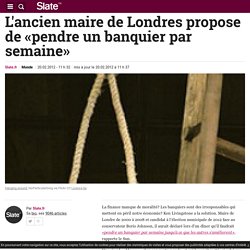 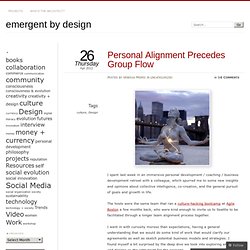 The hosts were the same team that ran a culture-hacking bootcamp at Agile Boston a few months back, who were kind enough to invite us to Seattle to be facilitated through a longer team alignment process together. I went in with curiosity moreso than expectations, having a general understanding that we would do some kind of work that would clarify our agreements as well as sketch potential business models and strategies. I found myself a bit surprised by the deep dive we took into exploring emotions and desires as the entrypoint for the sessions. Hole-in-the-Wall.

Global Citizen. Individual Membership. Free Card The above is a depiction of the free card that can be printed off and laminated by anyone. Click on the card to reach a printable version with instructions for trimming and lamination. A French version will be posted shortly, and then other languages as they appear. Open Knowledge: Home. Viktor Frankl on the Human Search for Meaning. By Maria Popova “Live as if you were living already for the second time and as if you had acted the first time as wrongly as you are about to act now!” 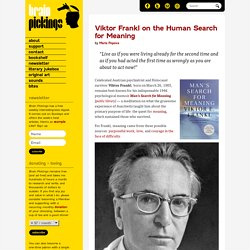 Celebrated Austrian psychiatrist and Holocaust survivor Viktor Frankl, born on March 26, 1905, remains best-known for his indispensable 1946 psychological memoir Man’s Search for Meaning (public library) — a meditation on what the gruesome experience of Auschwitz taught him about the primary purpose of life: the quest for meaning, which sustained those who survived. For Frankl, meaning came from three possible sources: purposeful work, love, and courage in the face of difficulty. In examining the “intensification of inner life” that helped prisoners stay alive, he considers the transcendental power of love: Love goes very far beyond the physical person of the beloved. TrendHunter Activism (th_activism) Solutions / Critical Mass Actions - Would you take part in a social change if 100,000 others joined you? 100,000 Monks meditate for a better world. PcqvG.jpg (Image JPEG, 960x639 pixels) 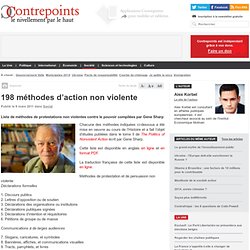 Cette liste est disponible en anglais en ligne et en format PDF. La traduction française de cette liste est disponible en ligne. Méthodes de protestation et de persuasion non violente. Tom Feeds the Homeless - Tom Mabe. "Don't tell people how to do things, tell them what to do and let them surprise you with their results" Solving the World's Problems Differently. Gene Sharp: Author of the nonviolent revolution rulebook. 21 February 2011Last updated at 10:42 By Ruaridh Arrow Director of Gene Sharp - How to Start a Revolution In an old townhouse in East Boston an elderly stooped man is tending rare orchids in his shabby office. His Labrador Sally lies on the floor between stacks of academic papers watching him as he shuffles past.

This is Dr Gene Sharp the man now credited with the strategy behind the toppling of the Egyptian government. Gene Sharp is the world's foremost expert on non-violent revolution. His work has been translated into more than 30 languages, his books slipped across borders and hidden from secret policemen all over the world. Continue reading the main story Key Steps on the Path to Revolution. Gene Sharp - Trois livrets pratiques.

101 tactics for revolutionaries. 101 tactics for revolutionaries You say you want a revolution, well you know we all want to change the world. John Lennon sang that, now I’m writing this. Challenging the Public To Do Good. An open and cooperative endeavor to distribute knowledge and precipitate action. 75 Boycott and Protest Innovations - From iTunes Boycotts to Profane Protests. Leaderless resistance. Leaderless resistance, or phantom cell structure, is a social resistance strategy in which small, independent groups (covert cells), including individuals (solo cells), challenge an established institution such as a law, economic system, social order, government, et cetera. Leaderless resistance can encompass anything from non-violent protest and civil disobedience to vandalism, terrorism and other violent activity.