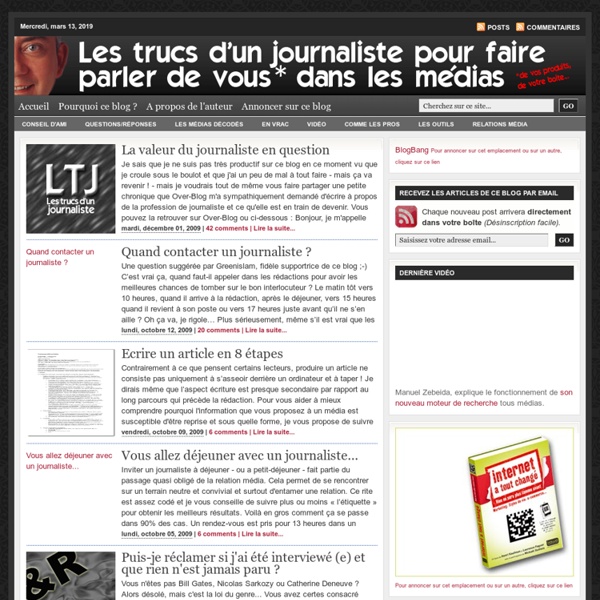 10 Kinds of Headlines to Try On Your Blog The message is loud and clear: Search is social. So when it comes to creating content that generates traffic and ranks for your target search terms, it’s not just a matter of optimizing your blog posts for the right keywords. Your content must be intriguing enough for your audience to click those little Shareaholic icons and spread your content to their social networks. It all starts by hooking your readers’ interest with a great headline. What makes a great headline? How the Internet is Affecting Traditional Journalism [SURVEY] In a survey conducted over May and June this year, PR network Oriella asked media moguls how the Internet was affecting their business, their publishing formats and even the quality of the content issuing forth from their newsrooms. In a survey of 770 journalists across 15 countries, the company determined that, while media creators are slightly more optimistic than they were last year about maintaining revenues vis-a-vis the rise of online ad budgets, many are still worried about whether traditional media formats can succeed in the long run. "Concerns about the viability of journalists’ traditional media channels (print, radio or television) have intensified," the report reads. "When asked about the future of their respective publications, over half of those polled believe that these channels may well fold and be taken off the market... This is a sharp rise from last year, when only one in three journalists surveyed believed this would happen.

Gene Sharp: Author of the nonviolent revolution rulebook 21 February 2011Last updated at 10:42 By Ruaridh Arrow Director of Gene Sharp - How to Start a Revolution In an old townhouse in East Boston an elderly stooped man is tending rare orchids in his shabby office. His Labrador Sally lies on the floor between stacks of academic papers watching him as he shuffles past. This is Dr Gene Sharp the man now credited with the strategy behind the toppling of the Egyptian government. Gene Sharp is the world's foremost expert on non-violent revolution. His work has been translated into more than 30 languages, his books slipped across borders and hidden from secret policemen all over the world. Two Cold-Emailed TechCrunch Pitches That Worked Vinicius Vacanti is co-founder and CEO of Yipit. Next posts on how to acquire users for free and how to raise a Series A. Don’t miss them by subscribing via email or via twitter. Your launch will have very little to do with your startup’s eventual success and you probably spend way too much time worrying about it. That being said, a successful launch can be used to gain thousands of early users if you did your job right when they show up. It won’t make or break your startup, but it will help.

The new rules of news You may have noticed – you could hardly miss it – the blizzard of anniversary stories last month about the fall of Lehman Brothers, an event that helped spark last year's financial meltdown. The coverage reminded me that journalists failed to do their jobs before last year's crisis emerged, and have continued to fail since then. It also reminds me of a few pet peeves about the way traditional journalists operate. So here's a list of 22 things, not in any particular order, that I'd insist upon if I ran a news organization. 1. Do You Blog on Trending Topics? Do It Right to Get Noticed and Get Ranked! Your blogging style is up to you. I for one usually shy away from newly hot and trending topics for various reasons: firstly, I am not based in the USA and thus I am slow in learning what everyone says, secondly, seeing great coverage, I usually have hard time finding what to add. And to tell you the truth, I come to realize this is a mistake. Trending topic coverage is GOLD.

Big Brother’s Big Brother » Article » OWNI.eu, Digital Journalism Wikileaks has pushed the definition and question of transparency to its limit and beyond, releasing hundreds of thousands of leaked documents about the wars in Afghanistan and Iraq through media organizations including the Guardian, The New York Times, Der Spiegel, Le Monde, and OWNI, a French site devoted to digital journalism that built a crowdsourcing tool so readers could cull through the docs to find important bits. The U.S. government screeched indignantly about the leaks, calling them illegal and dangerous. But then, the leaks revealed government actions that are or should be illegal. Who holds the higher ground?

Kettling For other meanings see kettle. The tactic has proved controversial, not least because it has resulted in the detention of ordinary bystanders as well as protestors.[2] In March 2012 kettling was ruled lawful by the European Court of Human Rights following a legal challenge.[3] Tactics[edit] 8 PR Tips for Launching your Startup - TNW Entrepreneur This is a guest post by Marc Köhlbrugge from PressDoc, one of our Incubator companies. After months, or sometimes even years of hard work you’re finally ready to show off your product to the public. You hope to attract media exposure and get people talking about your service or product. It’s an important day for your business, and like everything else that’s important, it’s best to be prepared. Arianna Huffington Interview: SOTB 2009 - Technorati Blogging Richard Jalichandra: How did you discover blogging? Arianna Huffington: For me it was the excitement of seeing the conversation moving online. I wanted to be a part of that so we started Arianna Online. The key thing was the interactivity. It was the discussion around the ideas that I was writing about.

A Timothy Leary for the Viral Video Age - Ross Andersen Meet Jason Silva, the fast-talking, media-savvy "performance philosopher" who wants you to love the ecstatic future of your mind. I want to introduce you to Jason Silva, but first I want you to watch this short video that he made. It will only take two minutes, and watching it will give you a good idea if it's worth your time to read the extensive interview that follows: If you ever wondered what would happen if a young Timothy Leary was wormholed into 2012, complete with a film degree and a Vimeo account, you have your answer: Jason Silva. If Silva, who was born in Venezuela, seems to have natural screen presence, it's because he's no stranger to media; he worked for six years as a host at Current TV before leaving the network last year to become a part-time filmmaker and full-time walking, talking TEDTalk.