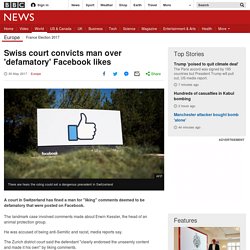 MS-13 gang: The story behind one of the world's most brutal street gangs. Image copyright Getty Images A string of brutal murders in the US has thrown a national spotlight on MS-13, a street gang that was born in LA but has roots in El Salvador. 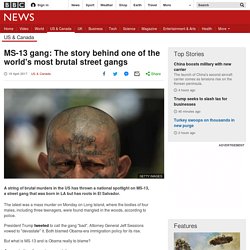 The latest was a mass murder on Monday on Long Island, where the bodies of four males, including three teenagers, were found mangled in the woods, according to police. President Trump tweeted to call the gang "bad". Attorney General Jeff Sessions vowed to "devastate" it. Both blamed Obama-era immigration policy for its rise. Trump order to target foreign worker visa programme. Image copyright Getty Images President Donald Trump has signed an executive order to review a temporary visa programme used to place foreign workers in high-skilled US jobs. 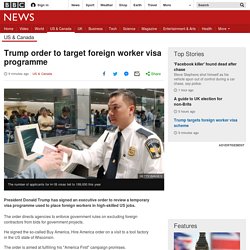 The order directs agencies to enforce government rules on excluding foreign contractors from bids for government projects. He signed the so-called Buy America, Hire America order on a visit to a tool factory in the US state of Wisconsin. The order is aimed at fulfilling his "America First" campaign promises. But it falls way short of Mr Trump's campaign pledge to end the H-1B visa programme. Mr Trump will direct the State, Justice, Homeland Security and Labour departments to propose reforms to the scheme, which allows American employers to bring foreign workers to fill US jobs. Iceland set to tackle gender pay gap with world's toughest law.

Image copyright Getty Images Iceland's parliament is examining a bill that would require companies to prove they offer equal pay to employees. 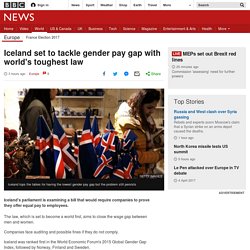 The law, which is set to become a world first, aims to close the wage gap between men and women. Companies face auditing and possible fines if they do not comply. The Most Powerful Man In The World - CNN Documentary. Fact check: The controversy over Trump's inauguration crowd size. Spicer defends most watched inauguration c... 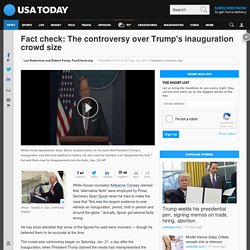 White House Spokesman Sean Spicer doubled down on his claim that President Trump's inauguration was the most watched in history. He also said his intention is to "always tell the truth," but said there may be disagreement over the facts. (Jan. 23) AP White House counselor claimed that “alternative facts” were employed by Press Secretary when he tried to make the case that “this was the largest audience to ever witness an inauguration, period, both in person and around the globe.” Actually, Spicer got several facts wrong. Rich and poor teenagers use the web differently – here's what this is doing to inequality.

In many countries, young people from wealthy and poor backgrounds spend roughly the same amount of time online. 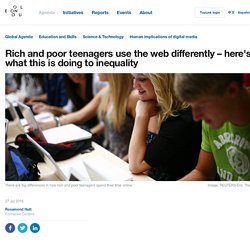 But it’s how they’re using the internet, not how long they’re using it that really matters. This is according to new research from the OECD, which found that richer teenagers were more likely to use the internet to search for information or to read news rather than to chat or play video games. Image: OECD. Could Technology Remove the Politicians From Politics? The tech industry has talked long and hard about democratizing industries. 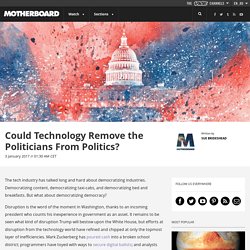 Democratizing content, democratizing taxi-cabs, and democratizing bed and breakfasts. But what about democratizing democracy? Disruption is the word of the moment in Washington, thanks to an incoming president who counts his inexperience in government as an asset. French workers win legal right to avoid checking work email out-of-hours. ‘Duck Dynasty’ vs. ‘Modern Family’: 50 Maps of the U.S. Cultural Divide. Facebook lurking makes you miserable, says study. Image copyright iStock Too much Facebook browsing at Christmas - and seeing all those "perfect" families and holiday photos - is more likely to make you miserable than festive, research suggests. 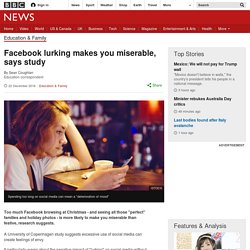 A University of Copenhagen study suggests excessive use of social media can create feelings of envy. It particularly warns about the negative impact of "lurking" on social media without connecting with anyone. The study suggests taking a break from using social media. The study of more than 1,000 participants, mostly women, says that "regular use of social networking such as Facebook can negatively affect your emotional well-being and satisfaction with life". Cuba and Venezuela’s Ties of Solidarity Fray. Syria: then and now. Donald Trump Summons Tech Leaders to a Round-Table Meeting. Photo SAN FRANCISCO — During the long presidential campaign, the most resolutely anti-Trump part of the country was the narrow strip of land south of this city. 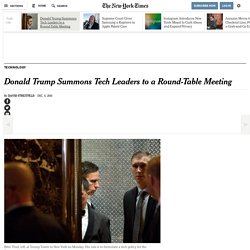 Silicon Valley shunned the Republican candidate and all he stood for. Venezuela's currency value depends largely on one guy at an Alabama Home Depot. Venezuela's economy is, to put it mildly, struggling. 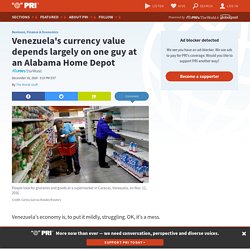 OK, it's a mess. The socialist government led by President Nicolás Maduro has had to contend with the collapse of oil prices, corruption and high inflation. Pope Francis Extends Priests’ Ability to Forgive Abortion. The rise in selfie deaths and how to stop them - BBC Newsbeat. Ideal Female Attractiveness Data. The 'Ideal' Female Body Size, Over Time Female attractiveness is nebulous and varies over time and place.

Both field and lab-based research have focused on quantifying female attractiveness and much of this research suggests that waist-to-hip ratio (WHR) is a reliable measure of female attractiveness. Dixson and coworkers have shown, via multiple studies, that the ideal WHR varies spatially. Trump's First 100 Days: Here Is What The President-Elect Wants To Do. Metro Bank lets customers choose Mr, Ms, Mrs and Mx. Iconic 'Afghan girl' from 'National Geographic' arrested in Pakistan. National Geographic's iconic, green-eyed Afghan Girl was arrested Wednesday at her home in , on charges she possessed a forged national identification card, authorities said.

Shahid Ilyas, an official of the 's , told AFP that Sharbat Gula was arrested following a two-year investigation and could face up to 14 years in prison. Pakistan, and particularly the Peshawar area along the Afghan border, has been home to more than a million Afghans fleeing decades of war. Pakistan has been cracking down on fake national identification cards and has launched a verification program across the nation. Gula was about 12 years old in 1984 when war photographer shot her haunting portrait Afghan Girl, which appeared on the cover of the internationally renowned magazine's June 1985 edition.

Audio shows Theresa May is pushing for a Brexit deal she knows will fail the country. Reuters/Pool Prime Minister Theresa May is pushing Britain into a "hard Brexit," which will see the UK leaves the European Union without a trade deal. May has justified this by saying that "Brexit means Brexit" and stressing that the will of the people is to reclaim control of Britain's borders even if it means giving up access to the EU's single market. Catholic cremation: Vatican issues new guidelines, says no to scattering ashes. How maths can get you locked up. Image copyright AP. Horseshoe theory. Federalist sentiment in the European Union. Germany reunified 26 years ago, but some divisions are still strong. How Morality Changes in a Foreign Language.

European Commission plans free wi-fi in public spaces. Image copyright Getty Images The European Commission wants free wi-fi to be provided in public spaces across its member states within four years. The goal was announced by the president of the European Union's executive body, Jean-Claude Juncker, in his annual state of the union address. He also wants at least one city in each EU country to have deployed a 5G mobile network by 2020. Edward Snowden makes 'moral' case for presidential pardon. From exile, Snowden requests a presidential pardon. In 2013, President Barack Obama said National Security Agency whistleblower Edward Snowden was not a patriot for revealing widespread government surveillance programs.

AP WASHINGTON — , the National Security whistleblower to some and traitor to others, said he will seek a pardon from for his role in disclosing a series of documents showing government surveillance on American citizens. But the White House appears to be disinclined to consider his case as he remains exiled in Russia rather than face charges in federal court that he violated the . In an interview with the British newspaper The Guardian published Tuesday, Snowden doesn't dispute that he broke federal law by stealing secret documents about eavesdropping while employed as a contractor for the . Trends in visiting public Libraries 2016. How a California bill became a lesson in compromise. LOS ANGELES — A proposed anti-discrimination measure in California may have become a model for compromise in the conflict between religious liberty and gender equality. Since its introduction in February, Senate Bill 1146 has been at the center of heated debate between faith-based private universities and gender equality advocates across the state – and the nation.