Perspective: a graphical comparison of earthquake energy release. Meet the heroic professor who helped uncover the Flint lead water crisis​ Virginia Tech professor Marc Edwards shows the difference in water quality between Detroit and Flint after testing, giving evidence after more than 270 samples were sent in from Flint that show high levels of lead during a news conference on Tuesday, Sept. 15, 2015 outside of City Hall in downtown Flint, Mich. 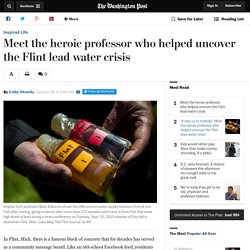 (Jake May/The Flint Journal via AP) In Flint, Mich. there is a famous block of concrete that for decades has served as a community message board. Like an old-school Facebook feed, residents use it to post personal news, images, upcoming events and commentary in sprawling graffiti. Portland installs turbines in their city water pipes, powers city by flushing toilets.

Moroccan solar plant to bring energy to a million people. A giant plant using energy from the Sun to power a Moroccan city at night will open next month. 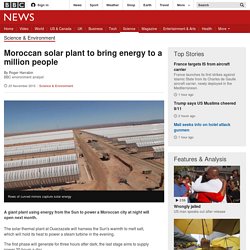 The solar thermal plant at Ouarzazate will harness the Sun's warmth to melt salt, which will hold its heat to power a steam turbine in the evening. What Do You Need to Know About El Niño? These 10 Things. - The Weather - Curbed Ski. [An El Nino-powered storm pounds the pilings of ocean front homes on Pacific Coast Highway in Malibu, Calif., in this Dec. 5, 1997, file photo. 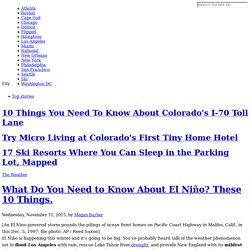 AP / Reed Saxon] El Niño is happening this winter and it's going to be big. You've probably heard talk of the weather phenomenon set to flood Los Angeles with rain, rescue Lake Tahoe from drought, and provide New England with its mildest winter in years. Row-Bot Pollution Eating Robot Walks On Water, Never Needs Charging. Sometimes you just have to tip your hat to researchers who work tirelessly to further technology not simply for profit or fame, but to better the world around them. 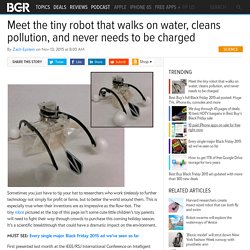 This is especially true when their inventions are as impressive as the Row-bot. The tiny robot pictured at the top of this page isn’t some cute little children’s toy parents will need to fight their way through crowds to purchase this coming holiday season. It’s a scientific breakthrough that could have a dramatic impact on the environment. MUST SEE: Every single major Black Friday 2015 ad we’ve seen so far. Oslo bans cars from its city center. 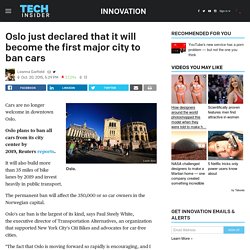 Cars are no longer welcome in downtown Oslo. Oslo plans to ban all cars from its city center by 2019, Reuters reports. “Mr. Trash Wheel” Removes 4,000,000 Cigarettes from Baltimore Harbor. A water wheel in Baltimore's Inner Harbor has removed 160 tons of garbage from the waterway in just under a year. 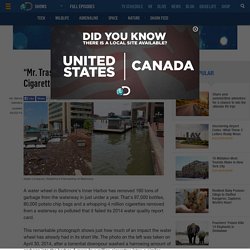 That's 97,000 bottles, 80,000 potato chip bags and a whopping 4 million cigarettes removed from a waterway so polluted that it failed its 2014 water quality report card. This remarkable photograph shows just how much of an impact the water wheel has already had in its short life. The photo on the left was taken on April 30, 2014, after a torrential downpour washed a harrowing amount of garbage into the harbor.

A mere four million cigarettes later, a similar storm earlier this week had almost no recognizable impact on the Harbor. UPDATE 5-Volkswagen shares plunge on emissions scandal, U.S. widens probe. Next two years hottest - 2015. Image copyright NOAA The next two years could be the hottest on record globally, says research from the UK's Met Office. 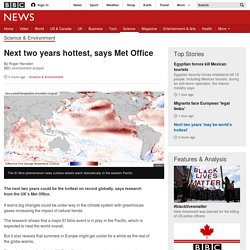 It warns big changes could be under way in the climate system with greenhouse gases increasing the impact of natural trends. NOAA weatherView. Why Is the Ocean Salty? Trophies. Gift cards for old mobile phones offer launched - BBC News. UK consumers can now trade in old mobile phones for an instant reward on the High Street in an initiative led by government-funded charity Wrap. 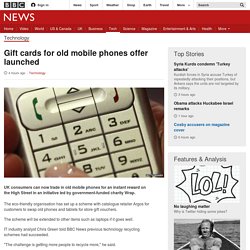 The eco-friendly organisation has set up a scheme with catalogue retailer Argos for customers to swap old phones and tablets for store gift vouchers. The scheme will be extended to other items such as laptops if it goes well. IT industry analyst Chris Green told BBC News previous technology recycling schemes had succeeded. How Water, Paradoxically, Creates the Land We Walk On. Chinese scientists have built the world’s first hydrogen-powered tram. In an effort to mitigate the ridiculous amounts of smog that cloud China’s biggest cities, local scientists have teamed up to develop the world’s first hydrogen-fuelled tram. 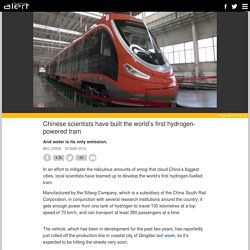 Manufactured by the Sifang Company, which is a subsidiary of the China South Rail Corporation, in conjunction with several research institutions around the country, it gets enough power from one tank of hydrogen to travel 100 kilometres at a top speed of 70 km/h, and can transport at least 380 passengers at a time. US 'at risk of mega-drought future' 12 February 2015Last updated at 19:18 ET By Jonathan Amos BBC Science Correspondent, San Jose. 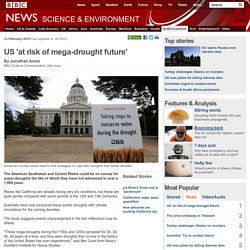 Tornado Tracks. Health of oceans 'declining fast' 3 October 2013Last updated at 01:19 ET. California's drought is the worst in 1,200 years, evidence suggests. As California finally experiences the arrival of a rain-bearing Pineapple Express this week, two climate scientists from the University of Minnesota and Woods Hole Oceanographic Institution have shown that the drought of 2012-2014 has been the worst in 1,200 years. Daniel Griffin, an assistant professor in the Department of Geography, Environment and Society at the University of Minnesota, and Kevin Anchukaitis, an assistant scientist at Woods Hole Oceanographic Institution, asked the question, "How unusual is the ongoing California drought?

" Watching the severity of the California drought intensify since last autumn, they wondered how it would eventually compare to other extreme droughts throughout the state's history. To answer those questions, Griffin and Anchukaitis collected new tree-ring samples from blue oak trees in southern and central California. Goce gravity map traces ocean circulation. 25 November 2014Last updated at 07:37 ET By Jonathan Amos Science correspondent, BBC News Floating buoys were used to validate the map of ocean circulation and speed Scientists have produced what they say is the most accurate space view yet of global ocean currents and the speed at which they move. Solar power is casting a bigger shadow. Does having your own solar power installation sound appealing? It apparently does to a growing number of American businesses and homeowners who are investing in what many tout as a cleaner and less expensive source of electricity.

And that trend of buying into solar power is also growing internationally. During 2014's second quarter, photovoltaic (PV) installations in the U.S. went over the gigawatt mark for the third consecutive quarter, according to the Solar Energy Industries Association (SEIA). A gigawatt is equivalent to the amount of power needed for around 750,000 homes. And while commercial solar power is still in its infancy (the Institute for Energy Research says solar makes up just 0.2 percent of the net energy produced in the U.S.), homes and businesses with solar panels are no longer considered an oddity.

Solar energy costs are also dropping. The solar industry has also become an important source of jobs for Americans. A report published earlier this month by the Nelson A. Poncho — WHAT EXACTLY IS THE DEW POINT? Death Valley’s moving rocks caught in the act. How Rocks Move. This Weird, Massive Tower May Be the Future of Energy in the U.S. Getting clean water from the sea, at a high price. The ongoing severe drought in California is the just the latest in a recent series of water crises that have kept large areas of America parched. Parts of Texas and the Southwest are still recovering from historic drought conditions that dried up the region several years ago.

And given global climate change and the world's growing population, the costly process of desalination -- turning ocean or brackish water into clean, drinkable fresh water -- is being considered a viable option in California and elsewhere. In California alone, 17 desalination plants are either under construction or being planned, including the $1 billion Carlsbad facility near San Diego, scheduled to open in 2016. Once fully operational, that plant is expected to produce 50 million gallons of drinking water a day.