How Often People in Various Countries Shower. Cleanliness, it turns out, has been one dirty trick. 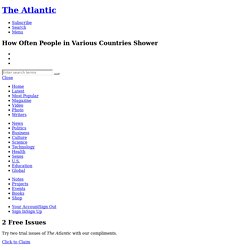 One reason early-20th-century Americans ramped up their weekly baths to daily showers is that marketing companies capitalized on the insecurities of a new class of office drones working in close quarters. As Gizmodo wrote last week, to sell products like "toilet soap" and Listerine to Americans, "the advertising industry had to create pseudoscientific maladies like 'bad breath' and 'body odor.'" Take, for instance, Gizmodo's description of the philosophy of the Cleanliness Institute, which was founded by the Association of American Soap and Glycerine Producers: The trade association wanted Americans to to wash quite unwittingly after toilet, to wash without thought before eating, to jump into the tub as automatically as one might awake each new day.

And so we did. Showers Per Week Now is the dawn of a new, more pungent era, though. A Euromonitor poll from July found that Americans are fairly average when it comes to hygiene. How much skin do we shed in one hour? Filters. Dead skin cells. Part%20G%20article%20for%20website. Setting the European standard for water efficient products. Guidance on flow rates for taps, showers and baths. Low Pressure (Gravity) Installations – Typically for a two storey house with cold water tank in loft serving hot water cylinder on the first floor. 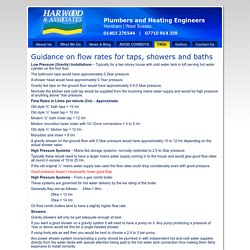 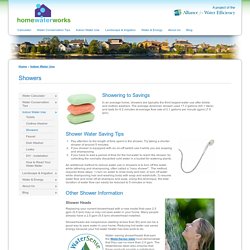 The average American shower uses 17.2 gallons (65.1 liters) and lasts for 8.2 minutes at average flow rate of 2.1 gallons per minute (gpm) (7.9 lpm). Shower Water Saving Tips Pay attention to the length of time spent in the shower. Try taking a shorter shower of around 5 minutes.If you shower is equipped with an on-off switch use it while you are soaping and shampooing.If you have to wait a period of time for the hot water to reach the shower, try collecting the normally discarded cold water in a bucket for watering plants. An additional method to reduce water use in showers is to turn off the water while lathering and shampooing, often called a "navy shower". Epidemiology & Infection - Faecal contamination of water and fingertip-rinses as a method for evaluating the effect of low-cost water supply and sanitation activities on faeco-oral disease transmission. I. A case study in rural north-east Thailand. 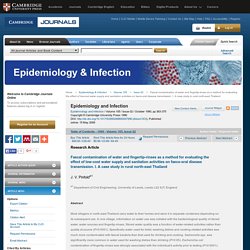 V. Pinfold (1990). Faecal contamination of water and fingertip-rinses as a method for evaluating the effect of low-cost water supply and sanitation activities on faeco-oral disease transmission. Common Bathroom Habits Revealed. SPECIAL FROM Grandparents.com For the naturally curious, a closed door is cause for questions. 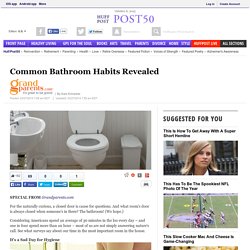 And what room’s door is always closed when someone's in there? The bathroom! (We hope.) Considering Americans spend an average of 30 minutes in the loo every day – and one in four spend more than an hour – most of us are not simply answering nature's call. It's a Sad Day for Hygiene Let’s kick things off with a most stunning statistic: A whopping 95 percent of people do not wash their hands properly before leaving the bathroom, according to a 2013 study conducted by Michigan State University researchers.

Energy Saving Trust. Did you know that much of your water use at home contributes to your energy bill? 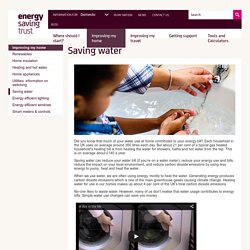 Each household in the UK uses on average around 360 litres each day. But about 21 per cent of a typical gas heated household's heating bill is from heating the water for showers, baths and hot water from the tap. This is on average about £140 a year. Saving water can reduce your water bill (if you’re on a water meter), reduce your energy use and bills, reduce the impact on your local environment, and reduce carbon dioxide emissions by using less energy to pump, heat and treat the water. When we use water, we are often using energy, mostly to heat the water. Water_factsheet_2012. Lower Income Countries.