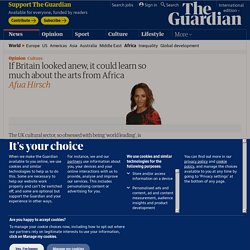 This week, hundreds of venues across the UK were lit up in red – not in an inspired display of creativity, but as a cry for help as arts venues find themselves on the brink of collapse. The protest culminated in the iconic chimney at London’s Tate Modern art gallery being made bright red, and illuminated with the words “Throw Us a Line” – a reference to the 1m jobs at risk in the live events sector following the Covid-19 pandemic and shutdown. A report from the digital, culture, media and sport select committee warned last month that the UK now faces the prospect of becoming a “cultural wasteland”. But it’s not just Covid-19 that is responsible for this calamity.

Britain has long celebrated its cultural productivity. If Britain looked anew, it could learn so much about the arts from Africa. African art in Western museums: it's patrimony not heritage. Museums with colonial-era collections have always known about the brutal parts of their biographies. 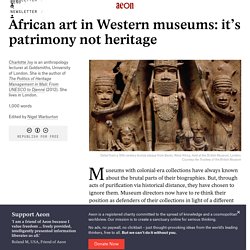 But, through acts of purification via historical distance, they have chosen to ignore them. Museum directors now have to re-think their position as defenders of their collections in light of a different political agenda that locates people and their patrimony in a precolonial, yet radically altered, landscape. When learning about cultural heritage, you will be directed to the etymology of the words ‘heritage’ and ‘patrimony’. Whereas ‘heritage’ invokes inheritance, ‘patrimony’ leads us to patriarchy. In French, patrie refers to the homeland, the fatherland, and during colonialism vast swathes of West Africa were brought under this French conceptual model in the 19th and early 20th centuries. African art in Western museums: it's patrimony not heritage. Nigeria renews campaign for return of looted artifacts. Reading Time: 6 minutes Returning African artefacts taken by explorers and colonisers has remained a serious issue in Europe-Africa relations. 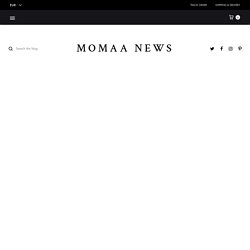 Gregory Austin Nwakunor (Arts and Culture Editor of Guardian Arts) interrogates the new Federal Government campaign for return of Nigeria’s stolen and looted artefacts. When a Cambridge University college said on Thursday it would return an antique statue of a cockerel to Benin City, capital of Edo State, Nigeria, more than 120 years after British colonial forces looted it, the Federal Government responded, saying it was delighted by the announcement, and thereafter, launched a broad appeal for museums across the world to return its heritage.

Many consider the move by Jesus College as likely to step up pressure on other institutions holding plunder from the historic Kingdom of Benin and other objects from other cultures taken by colonialists during the 19th century. MoMAA Repatriation of African Art. Should museums return their colonial artefacts? “I am from a generation of the French people for whom the crimes of European colonialism are undeniable and make up part of our history,” announced Emmanuel Macron to a crowded lecture theatre at Ouagadougou University, in Burkina Faso, in November 2017. 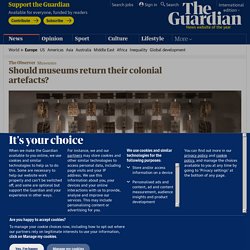 “I cannot accept that a large part of cultural heritage from several African countries is in France … In the next five years, I want the conditions to be created for the temporary or permanent restitution of African patrimony to Africa.” In case anyone missed the significance of the French president’s remarks, the Elysée Palace was swift to spell out the new policy: “African heritage can no longer be the prisoner of European museums.” The following year brought another notable intervention, this time from supervillain Erik Killmonger in the Marvel blockbuster Black Panther. Macron’s pledge and Killmonger’s heist had context. Action soon followed. Returning looted artefacts will finally restore heritage to the brilliant cultures that made them. European museums are under mounting pressure to return the irreplaceable artefacts plundered during colonial times. 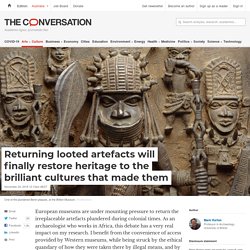 As an archaeologist who works in Africa, this debate has a very real impact on my research. I benefit from the convenience of access provided by Western museums, while being struck by the ethical quandary of how they were taken there by illegal means, and by guilt that my colleagues throughout Africa may not have the resources to see material from their own country, which is kept thousands of miles away. Now, a report commissioned by the French president, Emmanuel Macron, has recommended that art plundered from sub-Saharan Africa during the colonial era should be returned through permanent restitution.

The 108-page study, written by French art historian Bénédicte Savoy and Senegalese writer and economist Felwine Sarr, speaks of the “theft, looting, despoilment, trickery and forced consent” by which colonial powers acquired these materials. To Truly Take Ownership of Its Heritage, Africa Needs a New Museum to House Its Returning Cultural Artifacts. There is perhaps no greater example of the horrors of colonialism than Leopold II of Belgium’s reign in the Congo Free State. 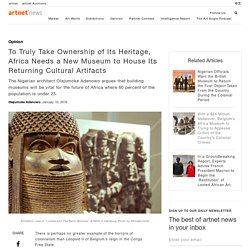 While stripping the Central African region of its resources and enslaving its inhabitants, he oversaw the genocide of as many as 15 million people in the late 19th century. Yet until the recent reopening of Belgium’s —newly “decolonized”—Royal Museum for Central Africa, these exploits were all but celebrated. Still, the institution now called the Africa Museum contains thousands of artifacts snatched from African hands. When the French President, Emmanuel Macron, promised in a landmark speech at the University of Ouagadougou in Burkina Faso to return “African heritage to Africa,” it was not an exaggeration. Only returning looted art can restore heritage to cultures that created it - CNN Style.

France urged to return looted art, amend heritage laws - CNN Style. A new report commissioned by French President Emmanuel Macron will advise him to pull thousands of African artifacts looted during the colonial era out of French museums and return them to the continent. 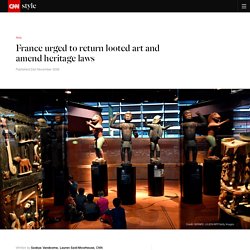 French collections house at least 90,000 pieces originating from sub-Saharan Africa with around 70,000 works in Paris' Quai Branly museum alone, according to French historian Bénédicte Savoy and Senegalese writer and academic Felwine Sarr, the co-authors of the report. They also estimated a further 20,000 objects are held in several port cities throughout the country.

The authors note that African cultural pieces are protected by strict French laws that consider them state public property, even if they were taken illicitly. The report recommends changing France's policies so that if an artifact's provenance finds it to have been acquired without consent, it can be returned through bilateral agreements struck between France and the country of origin. Gov. It's time for museums to return their stolen treasures - CNN Style. Written by Geoffrey Robertson. 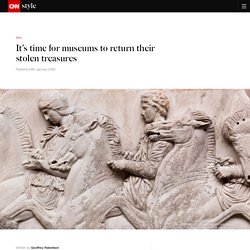 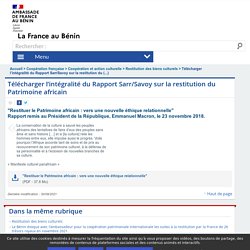 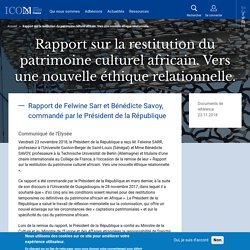 Now France has launched a report calling for thousands of African art in its museums to be returned to the continent. Benin Bronzes Image copyright British Museum. Senegal unveils Museum of Black Civilisations. Image copyright AFP President Macky Sall has inaugurated Senegal's new Museum of Black Civilisations in the capital, Dakar. It follows calls from Senegal and other African nations for France to return art it looted during the colonial era. Among the first temporary exhibitions to be shown is work from artists from Mali and Burkina Faso as well as from Cuba and Haiti.

Alice Procter. The gardian uk british museum colonial art. Give it back: Africa’s treasures need to come home. Financial Times. Accessibility help Skip to navigation Skip to content Skip to footer New to the Financial Times? Enjoy 7 days of free access Financial Times International Edition News. Travel + Leisure. Get the Facts. Twenty years ago, on assignment for The New Yorker, I traveled for two months in the Democratic Republic of the Congo, then known as Zaire. One morning, I was walking down the street in Kisangani when a kid ran up with a cane that he wanted to sell me.

It wasn't "airport art"; it was the real thing—a chief's cane, exquisitely carved out of some hard, black wood. Halfway up, it spiraled into a woman with jutting breasts; above her, a man squatted on a drum. The top swirled back into a crook that reconnected with the cane several inches down. Tracing African Roots. West-Central Africa is the single embarkation region where the biggest number of African slaves were exported from to almost all destinations within the Americas.

West Africa (Kongo) – Dock Tattoo Project. African art needs to come home - and this is why. African art dots museums across Europe and North America, gracing countries where many Africans would be hard pressed to get a visa. African Art: History, Characteristics. The Art of the African Kingdoms. Osun-Osogbo - Wikipedia. 10 Great Ancient Mysteries Of Africa. MessageToEagle.com – In Africa, there are many fascinating, little explored ancient places that are shrouded in mystery. On this beautiful continent, we find traces of long gone powerful ancient kingdoms, prehistoric structures raised for unknown reason, enigmatic ancient artifacts and much more.