Finding the Unbiased on the Internet 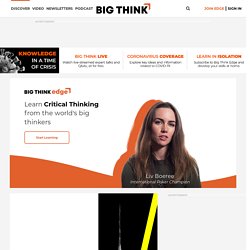 The Ad Fontes' Media Bias Chart maps out the biases and reliability of legacy and alternative news organizations. Political bias is one of many we must be wary of when judging the quality of the news we consume. The New York Times was a failing newspaper before changing its business model to muckraking on Trump. Fox News had to drop its "Fair and Balanced" motto because that's false advertising.

CNN should be renamed the "Know-Nothing Network. " If you've spent any time on social media, or in the inescapable presence of extended family, you've heard someone slagging on the news sources they disagree with. While a mere annoyance in that moment, such mindsets have become a widespread social ill. Such a state is pernicious at the best of times, but in dire times, such as the coronavirus pandemic, the spread of unreliable information can be of fatal concern. Bellingcat's Online Investigation Toolkit. 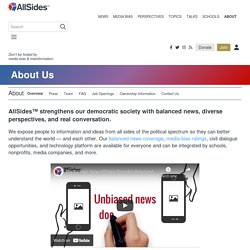 We display the day’s top news stories from the Left, Center and Right of the political spectrum — side-by-side so you can see the full picture. Media Bias Ratings We provide Media Bias Ratings for nearly 600 media outlets and writers, so you can easily identify different perspectives. Balanced Issues, Diverse Perspectives. Understand how the Left, Right and Center think differently about various issues. Civil Dialogue Our Mismatch program and civil dialogue partnerships provide opportunities for respectful conversations with people across divides. Schools Program AllSides for Schools prepares students for thoughtful participation in democracy — and in life. 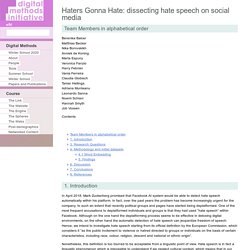 Introduction In April 2018, Mark Zuckerberg promised that Facebook AI system would be able to detect hate speech automatically within his platform. In fact, over the past years the problem has become increasingly urgent for the company, to such an extent that recently political groups and pages have started being deplatformed. Nonetheless, this definition is too blurred to be acceptable from a linguistic point of view.

While the majority of academic studies have been focusing on detecting, measuring and highlighting hate speech on social media, we mean to outline a critical perspective on the concept of hate speech itself. 3. 1) How valuable is the use of hatebase.org as a repository of multilingual hate speech? 4. 4.1 Word Embedding 5. DmiSummerSchool < Dmi < Foswiki. 2020: Social media manipulation: from artificial amplification to inauthentic behaviour2019: “Trolls, bots and dictators” - On the current state of social media research2018: Retraining the Machine: Addressing Algorithmic Bias2017: Get the Picture. 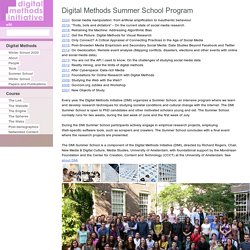 Digital Methods for Visual Research2016: Only Connect? A Critical Appraisal of Connecting Practices in the Age of Social Media2015: Post-Snowden Media Empiricism and Secondary Social Media: Data Studies Beyond Facebook and Twitter 2014: On Geolocation: Remote event analysis (Mapping conflicts, disasters, elections and other events with online and social media data)2013: You are not the API I used to know: On the challenges of studying social media data 2012: Reality mining, and the limits of digital methods2011: After Cyberspace: Data-rich Media2010: Foundations for Online Research with Digital Methods2009: Studying the Web with the Web? Manually scraped data document. Funny Pictures, Funny Videos. Reddit: the front page of the internet. Top 5 Chats and Forums Websites In The World. The most popular forum websites are focused on technology. 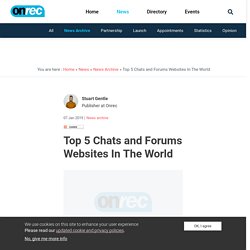 Other popular forum sites include game sites and home/hobby sites that cover topics like photography and cooking. We’ve chosen five of the best chat and forums where you can ask questions, find info, and share your own stories. Reddit Reddit is lovingly known as the front page of the internet. At its simplest Reddit is really just a good old-fashioned discussion forum. Quora Even if you've been living under a rock, chances are you’ve heard of Quora. Stack Overflow StackOverflow is a platform where students and professionals post queries and answer questions about programming. XDA-Developers It is a community of several million Android and Windows Phone developers who use the XDA website and forums to discuss OS versions, specific devices and customization.