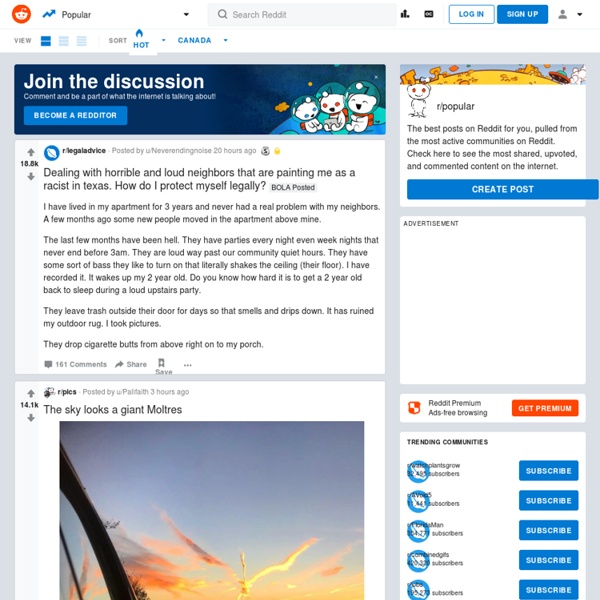 Might Alien Life Evolve Like the Incredible Octopus? by Natalie Shoemaker Consider the octopus: a creepy skeleton-less creature with limbs that have regenerative properties and a mind of their own. Its structure — inside and out — makes it like no other animal on earth. As a part of the Mollusca phylum, the octopus seems so far removed from its clam cousin. Neurobiologist Benny Hochner, from the Hebrew University of Jerusalem in Israel, talked about this oddity in an interview with Alison Abbott from Nature: What is Reddit? A Beginner's Guide to the Front Page of the Internet What is Reddit? It’s what is lovingly known as the front page of the internet. It’s a place where millions of people go every day to discuss politics, post memes, find porn, and share every odd thought that’s ever occurred to them in the shower. No matter who you are or what you’re into, Reddit has a place for you. From social justice warriors to men’s rights activists and conspiracy theorists, all are accounted for.

Boeing may have used a lobbying firm to plant an op-ed slamming SpaceX Boeing, the 102-year-old titan of the aerospace industry, is in a heated competition with SpaceX, Elon Musk's rocket company, for billions of dollars in NASA contracts. As Boeing is seeking to secure that taxpayer funding — and the prestige of launching astronauts into space — the company might be secretly placing an opinion article that criticizes SpaceX in newspapers around the US. Both companies are trying to show NASA they can safely launch the agency's astronauts to and from the International Space Station as part of NASA's Commercial Crew Program, a roughly $8 billion competition the agency launched to spur private companies to build safe, cost-effective, American-made spaceships. Through that program, SpaceX won a $2.6 billion contract to develop its Crew Dragon space capsule, and Boeing has received $4.8 billion for its CST-100 Starliner space capsule.

Writing Advice My eyes usually glaze over whenever I see somebody saying something as artsy as “go into yourself”. But this is Rilke. And it’s worth getting past that. You are looking outward, and that above all you should not do now. Nobody can counsel and help you, nobody. There is only one single way. How to Write the Best Blog Posts That Get Tons of Traffic - CoSchedule Have you ever wondered how top-performing bloggers consistently publish exceptional posts? While their work may look like magic, it doesn’t happen by accident. They have processes that help them work efficiently and produce quality content. This is true for most writers in general.

6 People Search Engines You Can Use to Find Anyone Finding people online is easy if you have the right tools. You can track down someone's phone number, figure out their address, see their relatives, dig up their email address, read arrest records, and more when you use a people search engine. Why Use People Search Engines Maybe you need to find a long-lost school friend or locate a relative that you haven't heard from in years.

SpaceX breaks record for commercial orbital rocket launches in a year This has been SpaceX's most incredible year yet for launching rockets. In 2018, Elon Musk's aerospace company achieved 20 successful launches. Those missions sent dozens of payloads into orbit, debuted two experimental Starlink internet satellites, and even shot a car past the orbit of Mars. The company still has one more launch planned for December. Karl Ove Knausgaard on Failure, Memory, and Writing 20 Pages a Day The fifth book in Karl Ove Knausgaard’s widely and obsessively loved My Struggle will be released next week, April 19th, from Archipelago Press. John Freeman caught up with the inimitable Knausgaard in Japan. John Freeman: Book five of My Struggle was written at speed and originally published five years ago. Karl Ove Knausgaard: Yeah

Introducing Typerighter: making life easier for journalists – and stories better for readers Is it Damien Hurst or Damian Hirst? What’s the difference between a “magic bullet” and a “silver bullet”? (Clue: you can kill werewolves with only one of them.) Beautiful World of Sea Slugs-click on pic On land, slugs are far from nature's most beautiful creatures--but underwater, the family of shell-less creatures known as nudibranchs come in bright neons, glowing pastels, and vibrant primary colors. The 3,000 different kinds of nudibranchs get their color from the food they eat--and, in some cases, secrete the poisons from their prey to defend themselves against predators. The Fried Egg Nudibranch gets its name from the perfect yellow-and-white circles that line its back.

6 Most Powerful Search Engines for Social Networks Are you looking for a long-lost friend or an ex-colleague? Perhaps you’re trying to catch up with the latest trends on Twitter The 10 Weirdest Trends That Took Social Media by Storm There have been some awfully weird trends on social media. How many of these do you remember? How many have you taken part in? Apollo 17 in Real-time A real-time interactive journey through the Apollo 17 mission. "When I left the Moon and started up the ladder, I was really at a loss. I didn’t want to leave and I looked down at my last footsteps and realised I wasn’t coming this way again. Looking back over my shoulder at the Earth had a particular significance to me – it was alive, it was moving, with purpose and beauty through space and time. In those short few minutes I wanted to figure out what was the meaning of us – everyone alive in the world today…I wanted to press the freeze button, stop time to give myself a chance to think about it."

50 Awesome Websites to Submit Your Writing To So, you’ve successfully managed to avoid your social commitments to sit down and write something. After combing through it to check the grammar and that there isn’t a trail of letters from when you fell asleep on your keyboard, what’s the next step? You need to find somewhere to submit your writing online. The online writing community is bigger and better than ever before; one Google search later and you could find your new literary home.