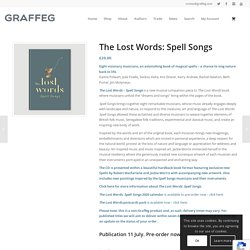 Spell Songs gathered together eight remarkable musicians whose music engages deeply with landscape and nature, to respond to the creatures, art and language of The Lost Words. Inspired by the words and art of the original book, each musician brings new imaginings, embellishments and diversions which are rooted in personal experience, a deep respect for the natural world, protest at the loss of nature and language or appreciation for wildness and beauty. Art inspired music and music inspired art. Jackie Morris immersed herself in the musical residency where she generously created new iconesque artwork of each musician and their instruments portrayed in an unexpected and enchanting way. The Lost Words ~ Spell Songs - dovegreyreader scribbles.

To my delight, and something of a consolation having missed the Hay Festival events, Spell Songs arrived in the same week and I have been listening and reading ever since. 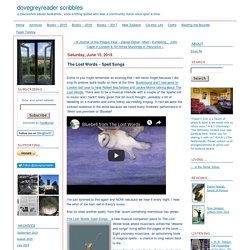 The CD is presented within a beautiful book and the result is frankly stunning. Encouraged to pursue their own musical trails with the spell songs, taking the words to new and different places, a collaboration of voices and fascinating musicality has emerged. Each artist brings their own unique interpretation and sound, but the skill is surely in the blending and the sharing, the creative connections, along with the generosity of spirit involved in letting others take centre stage when the music calls them. Surprising affinities emerged and these became increasingly apparent the more I listened... Or Willow... with Rachel Newton's unique (to me) pronunciation of 'willow'...

Willow when the wi-ind blowsWhisper while we listen so we learn what wordsyourlongleavesloosen I'm humming along as I type that. 9 Lost Words We Should Bring Back. History is full of obscure words that were once oft-used but have since been lost to time, from what criminals used to call the police to old-timey ways to refer to the office gossip. 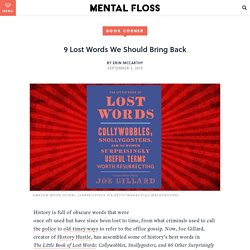 Now, Joe Gillard, creator of History Hustle, has assembled some of history’s best words in The Little Book of Lost Words: Collywobbles, Snollygosters, and 86 Other Surprisingly Useful Terms Worth Resurrecting, on sale now. Each word is accompanied by a vintage painting that delightfully illustrates its concept and a sentence that hilariously demonstrates its usage. Here are just a few of the many wonderful words you’ll find in its pages. 1. Egrote This English word, which dates back to the 18th century, means “to pretend to be sick.” 2. According to Gillard, this is a 17th-century English slang term meaning “a stingy, mean person.” 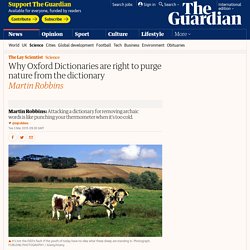 This metaphor helps explain two things: why I’m not a very successful writer, and why a group of authors are so concerned that a variety of words relating to nature were culled from the Oxford Junior Dictionary. The Lost Words. Take a look at ways in which The Lost Words and associated resources are put to use: Watch Riley Stemp’s #TeacherEffect story on The Lost Words as shared by the Department of Education. 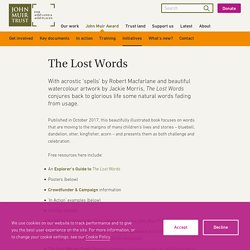 “I was just blown away… you feel that something that you were very inspired by, has inspired some beautiful writing as well.” Read about how The Lost Words is inspiring new audiences in accessible and inclusive ways. Watch Knoxland’s Primary 5 pupil's songs, raps and poems about venturing into their nearby woods with Tullochan to explore The Lost Words and dream of being wild animals. 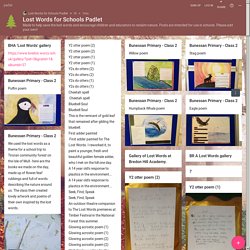 First adder painted First adder painted for The Lost Words. I reworked it, to paint a younger, fresh and beautiful golden female adder, who I met on the hill one day. A 14 year old's response to plastics in the environment... A 14 year old's response to plastics in the environment... The Lost Words Examples April 19 original. The Lost Words by Robert Macfarlane and Jackie Morris review – sumptuous. In 2007, the new edition of the Oxford Junior Dictionary introduced new words such as “broadband” while others, describing the natural world, disappeared. The dictionary’s guidelines require that it reflect “the current frequency of words in daily language of children”.

However, the philosopher AJ Ayer introduced a generation to the notion that unless we have a word for something, we are unable to conceive of it, and that there is a direct relationship between our imagination, our ability to have ideas about things, and our vocabulary. The Lost Words: An Illustrated Dictionary of Poetic Spells Reclaiming the Language of Nature. “Words belong to each other,” Virginia Woolf’s melodious voice unspools in the only surviving recording of her speech — a 1937 love letter to language. 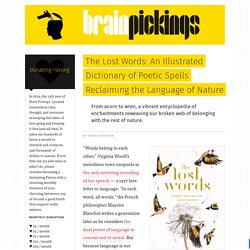 “In each word, all words,” the French philosopher Maurice Blanchot writes a generation later as he considers the dual power of language to conceal and to reveal. But because language is our primary sieve of perception, our mightiest means of describing what we apprehend and thus comprehending it, words also belong to that which they describe — or, rather, they are the conduit of belonging between us and the world we perceive. Campaign to get ‘lost words’ omitted from children’s dictionaries into schools - Sleaford Standard. Fears that common countryside words will forever disappear from children’s vocabularies has inspired a campaign by Lincolnshire Wildlife Trust. 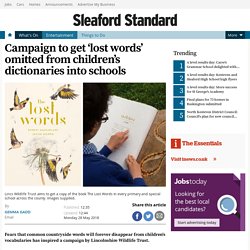 Familiar words most of us grew up with - such as dandelion, acorn, otter and starling - have been removed from the Oxford Junior Dictionary. They are among many which have slowly been disappearing from children’s dictionaries since 2010, says the wildlife trust. In response to this, an educational children’s book called The Lost Words has been written - and Lincolnshire Wildlife Trust is now crowdfunding to get a copy of it in every Lincolnshire primary school.

Premiere of James Burton’s “The Lost Words” at Tanglewood. The Lost Words. The Lost Words: A Spell Book by Robert Macfarlane and Jackie Morris published by Hamish Hamilton at Penguin - UKHouse of Anansi Press - North AmericaMatthes und Seitz - Germany Since the Lost Words’ publication in October 2017, this book has had a transformative effect on all who have come in contact with it. 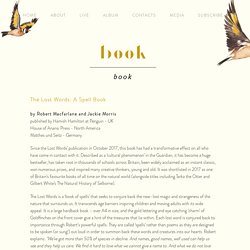 Described as a ‘cultural phenomenon’ in the Guardian, it has become a huge bestseller, has taken root in thousands of schools across Britain, been widely acclaimed as an instant classic, won numerous prizes, and inspired many creative thinkers, young and old. Reader's Guide: The Lost Words. New choral work highlights a refreshing evening of music at Tanglewood on Parade gala. By Clarence Fanto, Eagle correspondent LENOX — As a celebration of all things Tanglewood, and as a crucial fund-raiser for the Boston Symphony's summer institute of advanced young musicians, the annual Tanglewood on Parade gala is a crowd-pleasing showcase attracting more locals than typically attend BSO performances. 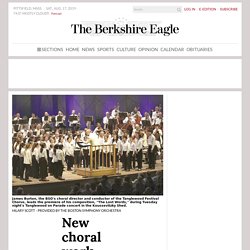 This year, Tuesday's concert included a keenly anticipated world premiere: James Burton's "The Lost Words" for children's choir and orchestra. Burton, the BSO's choral director and conductor of the Tanglewood Festival Chorus, also leads the Boston Symphony Children's Choir, which he formed last year. The group of Boston area 5th- to 9th graders scored a major triumph in Burton's charming, whimsical score, based on recent lavishly-illustrated book by Robert Macfarlane and Jackie Morris for children of all ages. The work was co-commissioned by the BSO and England's Halle Orchestra. Article Continues After These Ads By popular demand, some Tanglewood traditions never can die. Boston Symphony Orchestra. Singing The Lost Words Back to LifeNature words are disappearing from children’s vocabulary.

James Burton and the Boston Symphony Children’s Choir are bringing them back. In 2007, and then again in 2015, Oxford University Press released new editions of its “Junior” Dictionary, which omitted dozens of familiar nature words that had apparently fallen into disuse – “acorn,” “bluebell,” “dandelion,” “otter,” and “willow,” among others. This summer, the Boston Symphony Children’s Choir (BSCC) is singing the words back to life.

James Burton, Alan J. and Suzanne W. It was a joy to welcome @RobGMacfarlane to our Children's Choir rehearsal @BostonSymphony the other day, &amp; to sing him some of my new settings of #TheLostWords by him &amp; @JackieMorrisArt. Premiere is in July @TanglewoodMA &amp; vocal score is publi. Staff blog: Seeking the white noise of nature. John Muir Award Scotland Education Manager Rebecca Logsdon uses a 'Wild Day' in nature to help her rediscover her own lost words Stories and writing are a big thing in my life at the moment. I’m trying to support my eight-year-old son to find a love of writing. At work with the John Muir Trust's John Muir Award I’ve been writing about literacy and nature and, in an outdoor nursery, I’ve been learning about early literacy through storytelling.

A recent inspiration has been Jackie Morris and Robert Macfarlane’s book The Lost Words. It’s a wonderful wake up for any would-be writers. The Lost Words: helping unearth nature for new audiences. Riley, moved by the work of poet @RobGMacfarlane, took her Y6 writing class outside to create poems about nature. The children created such beautiful poems, they touched the heart of the very poet who inspired them. This is Riley's #TeacherEffect story. Lost Words - WildlifeWonder. Through the winter I’ve been working with The Lost Words Dorset, leading workshops in primary schools across the county. Drawing inspiration from The Lost Words book by Jackie Morris & Robert Macfarlane we’ve been enjoying the once-common ‘nature’ words – from acorn and conker, to starling and wren – that were dropped from the Oxford Junior Dictionary. And despite our exploration being in late autumn and winter, the children discovered so much nature in their school grounds, local churchyard, woods & meadows – bramble, dandelion, fern, ivy, raven, wren.

The Lost Words book brings these words back to life, through the ‘spell poems’ of Robert Macfarlane and the magical paintings of Jackie Morris. I’ve known Jackie for many years (we met through Howe Dell School where Wildlife Wonder began) so when she was working on illustrations for the book we talked about starlings and I shared some of my murmuration photography. The Conscience of Words: Susan Sontag on the Wisdom of Literature, the Danger of Opinions, and the Writer’s Task. “Words belong to each other,” Virginia Woolf observed in the only surviving recording of her voice. “Words are events, they do things, change things,” Ursula K.

Le Guin wrote many decades later in contemplating the magic of real conversation. The poet David Whyte marveled at “their beautiful hidden and beckoning uncertainty” as he set out to reclaim the deeper meanings of everyday words. But what do words actually do — what is their responsibility to us and ours to them? The Wisdom of Trees: Walt Whitman on What Our Silent Friends Teach Us About Being Rather Than Seeming. “When we have learned how to listen to trees,” Hermann Hesse wrote in his lyrical love letter to our arboreal companions, “then the brevity and the quickness and the childlike hastiness of our thoughts achieve an incomparable joy.” Two generations earlier, a different titan of poetic sentiment extolled trees not only as a source of joy but as a source of unheralded moral wisdom and an improbable yet formidable model of what is noblest in the human character. At fifty-four, a decade after his volunteer service as a nurse in the Civil War awakened him to the connection between the body and the spirit, Walt Whitman (May 31, 1819–March 26, 1892) suffered a severe stroke that left him paralyzed.

It took him two years to recover — convalescence aided greatly, he believed, by his immersion in nature and its healing power. Lost in Translation: An Illustrated Catalog of Beautiful Untranslatable Words from Around the World. “Words belong to each other,” Virginia Woolf said in the only surviving recording of her voice, a magnificent meditation on the beauty of language. But what happens when words are kept apart by too much unbridgeable otherness?