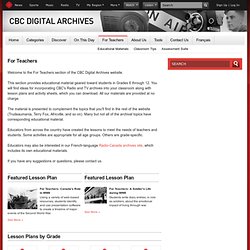 This section provides educational material geared toward students in Grades 6 through 12. You will find ideas for incorporating CBC's Radio and TV archives into your classroom along with lesson plans and activity sheets, which you can download. All our materials are provided at no charge. The material is presented to complement the topics that you'll find in the rest of the website (Trudeaumania, Terry Fox, Africville, and so on). Many but not all of the archival topics have corresponding educational material. Educators from across the country have created the lessons to meet the needs of teachers and students. Educators may also be interested in our French-language Radio-Canada archives site, which includes its own educational materials.

If you have any suggestions or questions, please contact us. Resource Bank Contents. Narrative | Resource Bank | Teacher's Guide. 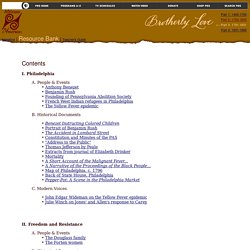 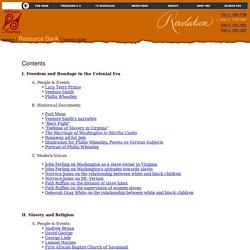 Vernon • Fath Ruffins on the division of slave labor • Fath Ruffins on the supervision of women slaves • Deborah Gray White on the relationship between white and black children II. Fur Trade. Relating the Historic Canadian Fur Trade in the Global Economy Learning Outcome Students will assess the impact of the fur trade on exploration and settlement. 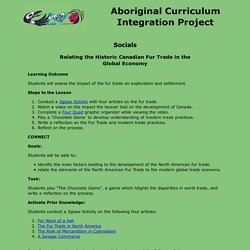 Steps to the Lesson Conduct a Jigsaw Activity with four articles on the fur trade. Building Student Success - BC's New Curriculum. CANADIAN HISTORY DIRECTORY. CANADIAN INDIAN HISTORY. "WALK IN OUR MOCCASINS THE TRAIL OF OUR PAST" Expo 67 People are not created equal, we are created different,we must re-learn how to respect these differences. 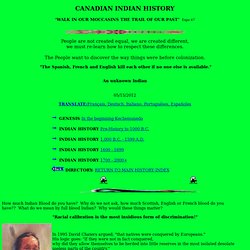 The People want to discover the way things were before colonization. "The Spanish, French and English kill each other if no one else is available. " An unknown Indian TRANSLATE:Français, Deutsch, Italiano, Portuguêses, Españoles GENESIS In the beginning Kechemunedo INDIAN HISTORY Pre-History to 1000 B.C. How much Indian Blood do you have? "Racial calibration is the most insidious form of discrimination!

" In 1995 David Chaters argued; "that natives were conquered by Europeans. " The painting on the left is of a Blackfoot Indian, painted by Zach This however is a very good question and one of the many reasons I wrote this section. Now that we are enlightened why do we continue to treat others the way we do? I have spent many hundreds of hours trying to purge the European bias from these documents. Contact & Conflict: First Nations, French, & English in Canada. When the Europeans arrived, First Nations were eager to trade furs for metal knives, axe heads, pots, needles, muskets, cloth, and glass beads. 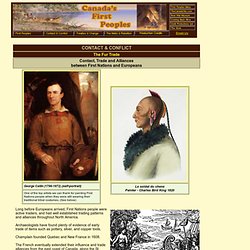 The trade goods were quickly dispersed along First Nations' traditional trade routes, and the fur trade expanded rapidly. There was fierce competition, often leading to warfare, between the French and British and their First Nations in North America all during the 1600s and 1700s. British Americans and their Indian allies launched attacks into Canada at various times. Canada’s First Nations: The Legacy of Institutional Racism. Canada’s First Nations: A Legacy of Institutional Racism By Claire Hutchings Sadly, our history with respect to the treatment of Aboriginal people is not something in which we can take pride. 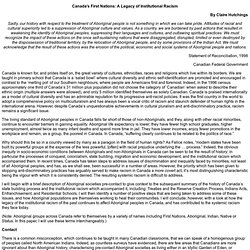 Attitudes of racial and cultural superiority led to a suppression of Aboriginal culture and values. Aboriginals-adopted-into-white-families-during-sixties-scoop-seek-apology-1. Chinta Puxley, The Canadian Press Published Monday, March 24, 2014 12:40PM EDT Last Updated Monday, March 24, 2014 7:05PM EDT WINNIPEG -- Some aboriginal people who were adopted into white families during the so-called Sixties Scoop say it's their turn for reconciliation and are calling for a formal apology from the federal government. 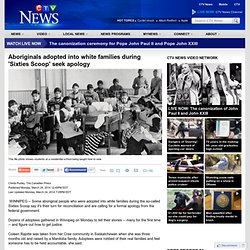 Dozens of adoptees gathered in Winnipeg on Monday to tell their stories -- many for the first time -- and figure out how to get justice. Coleen Rajotte was taken from her Cree community in Saskatchewan when she was three months old and raised by a Manitoba family. Adoptees were robbed of their real families and feel someone has to be held accountable, she said. "If someone came into your home today, took your children and shipped them to the United States and around the world, we would want answers," she said.

Rajotte said she was lucky enough to be placed into a loving home, but she lost her language, her culture and her connection to her ancestral home. Aboriginal Health in Canada: Historical, Cultural, and Epidemiological ... - James Burgess Waldram, Ann Herring, T. Kue Young. Aboriginal People and Colonizers of Western Canada to 1900 - Sarah Carter. JSTOR.