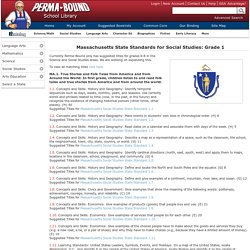 We are working on expanding this. MA.1. True Stories and Folk Tales from America and from Around the World: In first grade, children listen to and read folk tales and true stories from America and from around the world. 1.1. Concepts and Skills: History and Geography: Identify temporal sequences such as days, weeks, months, years, and seasons. 1.2. USA Symbols. Digital textbooks and standards-aligned educational resources. First Grade Sharing of USA. 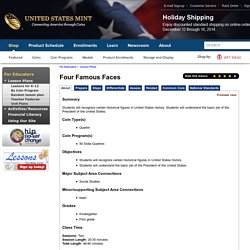 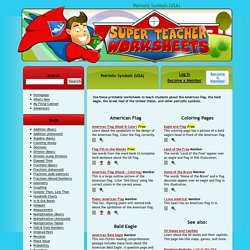 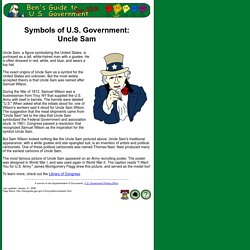 Government: Uncle Sam Uncle Sam, a figure symbolizing the United States, is portrayed as a tall, white-haired man with a goatee. He is often dressed in red, white, and blue, and wears a top hat. Who Is Uncle Sam? Even if your parents don’t have any brothers, did you know you still have an uncle? 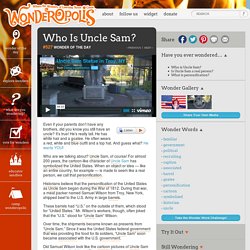 It’s true! He’s really tall. He has white hair and a goatee. He often wears a red, white and blue outfit and a top hat. Uncle Sam - Who Was He? / ViewPure. White House Facts. The White House. Deconstructing History: White House / ViewPure. It may not have been home to the president until 1800 or even called the White House until 1901, but it remains a symbol of freedom and democracy throughout the world.nnSubscribe for more History: out exclusive HISTORY videos and full episodes: daily updates on history: out our Facebook games, and other exclusive content: up to date with everything HISTORY by following us on Twitter: the latest on show premieres, special events, sweepstakes and more.nSign up for HISTORY email updates HISTORY on StumbleUpon: Topical VideonnHISTORY® is the leading destination for award-winning original series and specials that connect viewers with history in an informative, immersive and entertaining manner across all platforms. 2,026 views. 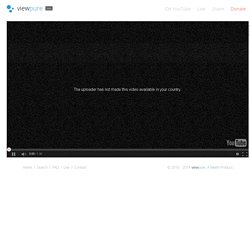 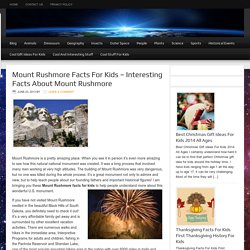 When you see it in person it’s even more amazing to see how this natural national monument was created. It was a long process that involved many men working at very high altitudes. The building of Mount Rushmore was very dangerous, but no one was killed during the whole process. It’s a great monument not only to admire and view, but to help teach people about our founding fathers and important historical figures! I am bringing you these Mount Rushmore facts for kids to help people understand more about this wonderful U.S. monument. If you have not visited Mount Rushmore nestled in the beautiful Black Hills of South Dakota, you definitely need to check it out! Mount Rushmore. Deconstructing History: Mount Rushmore / ViewPure. Nestled in the Black Hills of South Dakota, Mount Rushmore symbolizes freedom and hope for America. 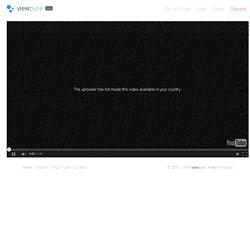 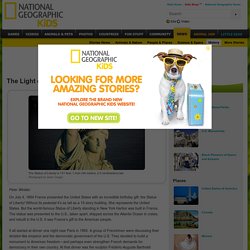 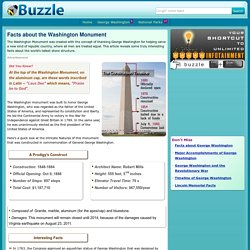 At the top of the Washington Monument, on the aluminum cap, are these words inscribed in Latin -- "Laus Deo" which means, "Praise be to God". The Washington monument was built to honor George Washington, who was regarded as the father of the United States of America, and represented its constitution and liberty. He led the Continental Army to victory in the War for Independence against Great Britain in 1789. Travel Washington, DC - Visiting The Lincoln Memorial / ViewPure. Lincoln Memorial Facts. Overview Located at the Western end of the National Mall in Washington, DC, the Lincoln Memorial commemorates the 16th President of the United States, Abraham Lincoln.

Started: Lincoln's birthday, February 12, 1915 Dedicated: May 30, 1922 Cost: $3 MillionArchitect: Henry Bacon Architecture: Greek RevivalHeight: 99 ft (30.2 m) tallMaterial: Marble, LimestoneSculptor: Daniel Chester FrenchHow tall is the sculpture: 19 feet tall, sitting.What is the sculpture made of: Georgia MarbleInscription Behind the Statue of Lincoln: "IN THIS TEMPLE AS IN THE HEARTS OF THE PEOPLE FOR WHOM HE SAVED THE UNION THE MEMORY OF ABRAHAM LINCOLN IS ENSHRINED FOREVER. " Visitors per year: 3,638,806 (in 2005) Hours Open: 24 Hours a DayLocation: West of the National Mall, Washington, DCAdmission: Free.

American Flag. The flag of the United States of America is a national symbol. Every country has a special flag. When people from other countries see our flag, they know it belongs to the United States of America. Our flag is often called the "Stars and Stripes" or "Old Glory. " We honor our flag on Flag Day which is celebrated on June 14. Our flag has 13 stripes. Us flag facts for kids. Independence Day and the History of the American Flag (Cool School) / ViewPure. The Bald Eagle. BALD EAGLE: Animals for children. Kids videos. Kindergarten. BALD EAGLE | Animal videos especially made for children. nMade in the UK.