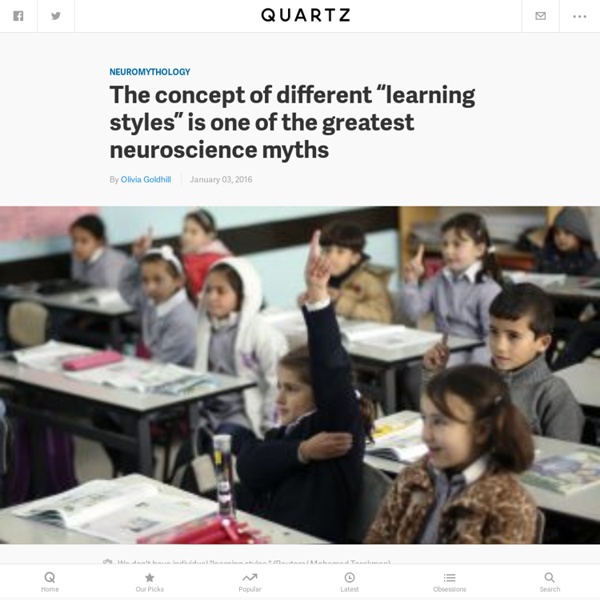 Are you a visual learner who writes notes in a rainbow of different colors, or do you have to read something aloud before it will sink it? Chances are, you’ve been asked a similar question at some point in your life, and believe the concept of different “learning styles” is perfectly valid. But, as Quartz reported in December, we all learn in fundamentally similar ways. And, as New York magazine reports, the idea that students learn differently depending on their personal preference for visual, auditory or kinesthetic cues is just a myth. In fact, it’s considered a “neuromyth,” which, as Paul Howard-Jones, professor of neuroscience and education at Bristol University, writes in a 2014 paper on the subject, is characterized by a misunderstanding, misreading, or misquoting of scientifically established facts. Other examples of neuromyths include that we only use 10% of our brain, and that drinking less than six to eight glasses of water a day will cause the brain to shrink. Related:  How to Think Critically. Fake News • Misc Vol. 01 • Education

10 Team-Building Games That Promote Collaborative Critical Thinking 10 Team-Building Games That Promote Critical Thinking by TeachThought Staff One of education’s primary goals is to groom the next generation of little humans to succeed in the “real world.” Yes, there are mounds of curricula they must master in a wide breadth of subjects, but education does not begin and end with a textbook or test. Other skills must be honed, too, not the least of which is how to get along with their peers and work well with others. This is not something that can be cultivated through rote memorization or with strategically placed posters. Students must be engaged and cooperation must be practiced, and often. 10 Team-Building Games That Promote Collaborative Critical Thinking You can purchase a classroom-ready version of team-building games that promote critical thinking here. 1. This team-building game is flexible. Then, give them something to construct. You can recycle this activity throughout the year by adapting the challenge or materials to specific content areas. 2. 3.

How the Nazis stole Christmas In 1921, in a Munich beer hall, newly appointed Nazi party leader Adolf Hitler gave a Christmas speech to an excited crowd. According to undercover police observers, 4,000 supporters cheered when Hitler condemned “the cowardly Jews for breaking the world-liberator on the cross” and swore “not to rest until the Jews…lay shattered on the ground.” Later, the crowd sang holiday carols and nationalist hymns around a Christmas tree. For Germans in the 1920s and 1930s, this combination of familiar holiday observance, nationalist propaganda and anti-Semitism was hardly unusual. Given state control of public life, it’s not surprising that Nazi officials were successful in promoting and propagating their version of Christmas through repeated radio broadcasts and news articles. But under any totalitarian regime, there can be a wide disparity between public and private life, between the rituals of the city square and those of the home. Redefining Christmas It’s a small, almost banal example.

Why America’s obsession with STEM education is dangerous If Americans are united in any conviction these days, it is that we urgently need to shift the country’s education toward the teaching of specific, technical skills. Every month, it seems, we hear about our children’s bad test scores in math and science — and about new initiatives from companies, universities or foundations to expand STEM courses (science, technology, engineering and math) and deemphasize the humanities. From President Obama on down, public officials have cautioned against pursuing degrees like art history, which are seen as expensive luxuries in today’s world. Republicans want to go several steps further and defund these kinds of majors. “Is it a vital interest of the state to have more anthropologists?” This dismissal of broad-based learning, however, comes from a fundamental misreading of the facts — and puts America on a dangerously narrow path for the future. For most of its history, the United States was unique in offering a well-rounded education.

Good Tools for Teaching Students How to Evaluate Web Content Credibility Source: Butler University Library, adapted from Meriam Library at CSU, Chico One of my favorite lessons to teach is about evaluating the credibility of web sites and other digital content. I often start by showing the classic “Can't Lie On The Internet” video from AllState, which gets a laugh and helps to get students in the right mind set. Next, we check out the classic “DHMO” site and talk about what we see there. Dihydrogen Monoxide sounds pretty scary, but is this site legitimate? That's when I bring up Kathy Schrock's 5 W's PDF and use it as a kick off point to discuss the idea of using criteria for evaluation, not just gut reactions. Another tool I came across recently that I like is this 60 Second Guide for evaluating web resources. There are countless resources on the web for evaluating content credibility, and it is easy to get a bit overwhelmed. The Challenges of Video and Social Media Credibility Another Great Resource: Snopes.com

A Very Merry History of the Santa Suit It’s something of a habit among liberal Americans to talk about how excellent the Netherlands are. They have socialized healthcare, strict gun control laws, beautiful furniture, a ton of bicycles, and apparently… they also gave birth to Santa Claus. Or, at least, the earliest version of Santa Claus as we know him today. Image: Transcendental Graphics/Getty To which I can reply: He does wear robes in the Netherlands. So, like a lack of guns and socialized healthcare, those are two more things that never made it to the U.S. The reason Black Pete never made the transition is pretty obvious. 19th century Dutch immigrants to brought tales of Sinterklass — or Santa Claus — with them to America. The jolly image seemed to have stuck. By 1913 Norman Rockwell was illustrating Santa on the cover of magazines like Boy’s Life in a manner that’s virtually indistinguishable from the way he looks today. Image: Pool BASSIGNAC/REGLAIN/Getty Sundblom altered the image of Santa a little bit each year.

What's Missing From Education? Critical Thinking Stewart Lyman12/24/14 There is too little emphasis on teaching critical thinking skills in schools. Many adults have little understanding of important science and technology issues, which leaves them open to poor decision making on matters that will affect both their families as well as society in general. A good example would be a failure to understand and appreciate the tremendous advancement in human health as a result of vaccines. These days, unfortunately, misinformation abounds on the Internet, and many parents don’t have the critical thinking skills to distinguish anecdotes and rumors from factual information. [Editor's note: To tap the wisdom of our distinguished group of Xconomists, we asked a few of them to answer this question heading into 2015: "If you could change one thing in education, what would it be?" Stewart Lyman is Owner and Manager of Lyman BioPharma Consulting LLC in Seattle.