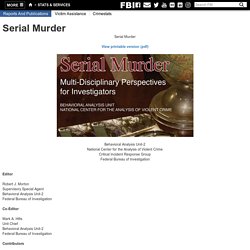 II. III. IV. V. VI. The Grail Diary From Indiana Jones and the Last Crusade: 12 Steps. AdWords We use AdWords to deploy digital advertising on sites supported by AdWords. 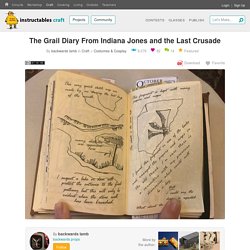 Ads are based on both AdWords data and behavioral data that we collect while you’re on our sites. The data we collect may include pages you’ve visited, trials you’ve initiated, videos you’ve played, purchases you’ve made, and your IP address or device ID. This information may be combined with data that AdWords has collected from you. We use the data that we provide to AdWords to better customize your digital advertising experience and present you with more relevant ads. LiveRamp. The Newspaper Clipping Generator - Create your own fun newspaper. Three New DNA Studies Are Shaking Up the History of Humans in the Americas. Gizmodo. YSK how to quickly rebut most common climate change denial myths. : YouShouldKnow. AIMING IS USELESS! 3 Secrets To Great Shooting. International Practical Shooting Confederation. Whataboutism - RationalWiki. Whataboutism (also known as Whataboutery) is a form of defensive propaganda used to counter criticism (usually from "the West", and usually on blatant human rights abuses) with a "What about...? 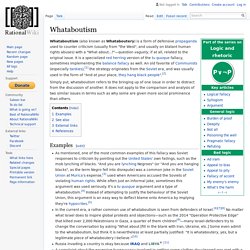 "—question vaguely, if at all, related to the original issue. It is a specialized red herring version of the tu quoque fallacy, sometimes implementing the balance fallacy as well. An old favorite of Communists (especially tankies),[1] the strategy originates from the Soviet era, and was usually used in the form of "And at your place, they hang black people".[2] Simply put, whataboutism refers to the bringing up of one issue in order to distract from the discussion of another. It does not apply to the comparison and analysis of two similar issues in terms such as why some are given more social prominence than others.

Superluminal Speeds (faster than light) - Sixty Symbols. Genetics. How to Create an Animated GIF in Photoshop. NASA just released its 2017 Software Catalog to the Public for Free. NASA released the third edition of its software catalog to the public—giving the world free access to tools it uses to explore the universe. 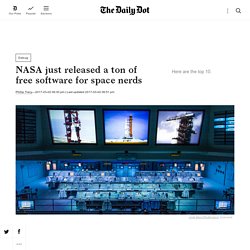 As you can imagine, many of the those are highly technical guides on blasting off rockets and space travel. For example, “Knife” is a library that “calculates the boolean subtraction of arbitrary watertight triangular polyhedral in order to make near-field sonic boom predictions.” Right there with you, NASA. NASA/YouTube But don’t worry, the independent agency knows we all love space, and is giving access to some incredible pieces of software that you might end up spending the rest of your week playing with. Here are the 10 most interesting things you can request to download from NASA. Worldview Satellite Imagery Browsing and Downloading Tool Worldview is a software tool that lets you download imagery from NASA satellites.

10 Tips to Improve Your Mental Math Ability. Search, Discover, Share, and Create Animated GIFs. 5 Cool Skills to Pick Up on a Lunch Break. Google Tips and Tricks - "I didn't know I could do that in Google!". Free public domain audiobooks. Best Free Audio Books Online. April 2, 2009 LearnOutLoud invites you jump in and listen to 100 of the best free audiobook downloads available online. 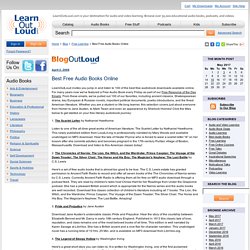 For many years now we've featured a Free Audio Book every Friday as part of our Free Resource of the Day Emails. From these emails, we've pulled out 100 of our favorites, including ancient classics, Shakespearean drama, key European & Russian novels, important political documents, poetry introductions, and the finest American literature. Whether you are a student or life-long learner, this selection covers just about everyone from Homer to Jane Austen, to Mark Twain and even an appearance by Sherlock Holmes! Click the titles below to get started on your free literary audiobook journey: 1. Listen to one of the all-time great works of American literature: The Scarlet Letter by Nathaniel Hawthorne. 2. Here's a set of free audio books that is almost too good to be true. 3. Download Jane Austen's undeniable classic Pride and Prejudice.