Famous Advice on Writing: The Collected Wisdom of Great Writers. By Maria Popova By popular demand, I’ve put together a periodically updated reading list of all the famous advice on writing presented here over the years, featuring words of wisdom from such masters of the craft as Kurt Vonnegut, Susan Sontag, Henry Miller, Stephen King, F. 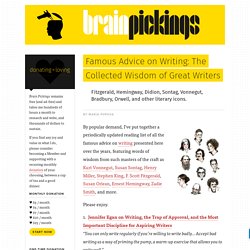 Famous Writers on the Creative Benefits of Keeping a Diary. 75 Books Every Writer Should Read. Whether you want to make writing your career or just want to know how to improve your writing so that you can pass your college courses, there is plenty of reading material out there to help you get inspired and hone your skills. 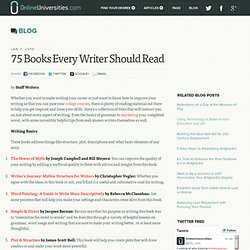 Here’s a collection of titles that will instruct you on just about every aspect of writing, from the basics of grammar to marketing your completed novel, with some incredibly helpful tips from well-known writers themselves as well. Writing Basics These books address things like structure, plot, descriptions and other basic elements of any story. The Power of Myth by Joseph Campbell and Bill Moyers: You can improve the quality of your writing by adding a mythical quality to them with advice and insight from this book. Writer’s Journey: Mythic Structure for Writers by Christopher Vogler: Whether you agree with the ideas in this book or not, you’ll find it a useful and informative read for writing. Advice from Authors Improving Your Writing. A new way of choosing what to read next.

Genres & Sub Genres. Science Fiction Sub-Genres Alien Invasion The alien invasion is a common theme in science fiction stories and film, in which a technologically-superior extraterrestrial society invades Earth with the intent to replace human life, or to enslave it under a colonial system, or in some cases, to use humans as food. 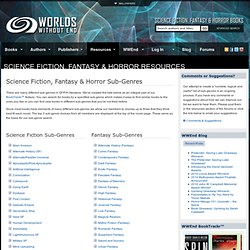 Alien Invasion Novels Alternate History (SF) Alternate history or alternative history is a subgenre of speculative fiction (or some would say of science fiction) that is set in a world in which history has diverged from history as it is generally known; more simply put, alternate history asks the question, "What if history had developed differently? " Alternate History (SF) Novels. Philosophical Quotes. Albert Camus Quotes. There is but one truly serious philosophical problem, and that is suicide. 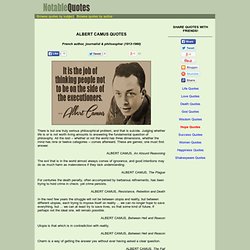 Judging whether life is or is not worth living amounts to answering the fundamental question of philosophy. All the rest -- whether or not the world has three dimensions, whether the mind has nine or twelve categories -- comes afterward. Chaos Quotes. One man's idea of perfect order is another man's chaos. 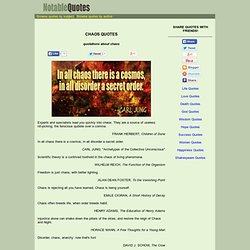 DEAN KOONTZ, Dark Rivers of the Heart War is the most readily available form of chaos. FRANK HERBERT, God Emperor of Dune Chaos is God's body. Change The World Quotes. Quotes. 40 Belief-Shaking Remarks From a Ruthless Nonconformist. 31 Quotes That Will Give You Chills. 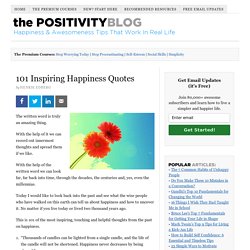 With the help of it we can record out innermost thoughts and spread them if we like. With the help of the written word we can look far, far back into time, through the decades, the centuries and, yes, even the millennias. Today I would like to look back into the past and see what the wise people who have walked on this earth can tell us about happiness and how to uncover it.

No matter if you live today or lived two thousand years ago. This is 101 of the most inspiring, touching and helpful thoughts from the past on happiness. Top 100 Inspirational Quotes. Positive Marriage Quotes. The best and most comprehensive list of happy and positive marriage quotes on the web. 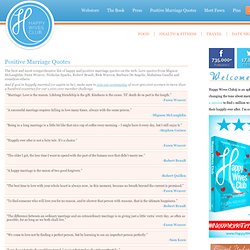 Love quotes from Mignon McLaughlin, Fawn Weaver, Nicholas Sparks, Robert Brault, Rick Warren, Barbara De Angelis, Mahatma Gandhi and countless others. Paul Salahuddin Armstrong. 10 Things That Every Brand New Creator of Science Fiction Should Know. How I Went From Writing 2,000 Words a Day to 10,000 Words a Day. When I started writing The Spirit War (Eli novel #4), I had a bit of a problem. 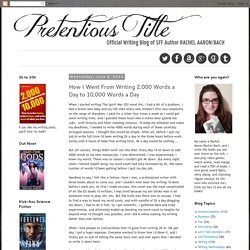 I had a brand new baby and my life (like every new mother's life) was constantly on the verge of shambles. I paid for a sitter four times a week so I could get some writing time, and I guarded these hours like a mama bear guards her cubs - with ferocity and hiker-mauling violence. To keep my schedule and make my deadlines, I needed to write 4000 words during each of these carefully arranged sessions. I thought this would be simple.

After all, before I quit my job to write full time I'd been writing 2k a day in the three hours before work. How to Master on the Art of Getting Noticed: Austin Kleon’s Advice to Aspiring Artists. By Maria Popova How to balance the contagiousness of raw enthusiasm with the humility of knowing we’re all in this together. 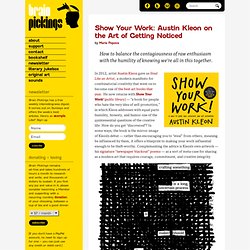 In 2012, artist Austin Kleon gave us Steal Like an Artist, a modern manifesto for combinatorial creativity that went on to become one of the best art books that year. He now returns with Show Your Work! (public library) — “a book for people who hate the very idea of self-promotion,” in which Kleon addresses with equal parts humility, honesty, and humor one of the quintessential questions of the creative life: How do you get “discovered”? In some ways, the book is the mirror-image of Kleon’s debut — rather than encouraging you to “steal” from others, meaning be influenced by them, it offers a blueprint to making your work influential enough to be theft-worthy. Microsoft Word is cumbersome, inefficient, and obsolete. It’s time for it to die. Image from Wikipedia. Nearly two decades and several text-handling paradigms ago, I was an editorial assistant at a weekly newspaper, where a few freelancers still submitted their work on typewritten pages.

Stories would come in over the fax machine. The Seven Ages of Innovation. In Act II Scene vii of Shakespeare’s As You Like It, the character Jaques de Boys speaks the memorable words “All the world’s a stage.” 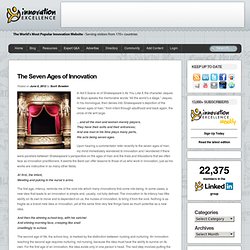 Jaques, in his monologue, then delves into Shakespeare’s depiction of the “seven ages of man,” from infant through adulthood and back again, the circle of life writ large: …and all the men and women merely players. They have their exits and their entrances; And one man in his time plays many parts, His acts being seven ages. Upon hearing a commentator refer recently to the seven ages of man, my mind immediately wandered to innovation and I wondered if there were parallels between Shakespeare’s perspective on the ages of man and the trials and tribulations that we often face as innovation practitioners.