Theconversation. Hand-held toys known as “fidget spinners” – marketed as “stress relievers” – have become so popular and distracting in classrooms that they are now being banned in many schools. 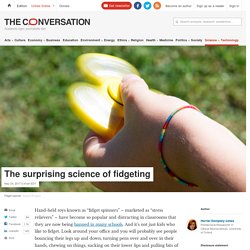 And it’s not just kids who like to fidget. Look around your office and you will probably see people bouncing their legs up and down, turning pens over and over in their hands, chewing on things, sucking on their lower lips and pulling bits of their beard out – seemingly completely unconsciously. But why do we fidget, and why do some people do it more than others? Tesla's Autopilot predicts a crash freakishly early. There's been a fair amount of controversy over Tesla's Autopilot feature, so if you've got your doubts about the capabilities of assisted driving technology when it comes to preventing accidents, it's worth taking a look at this. 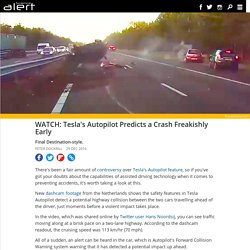 New dashcam footage from the Netherlands shows the safety features in Tesla Autopilot detect a potential highway collision between the two cars travelling ahead of the driver, just moments before a violent impact takes place. In the video, which was shared online by Twitter user Hans Noordsij, you can see traffic moving along at a brisk pace on a two-lane highway. According to the dashcam readout, the cruising speed was 113 km/hr (70 mph). All of a sudden, an alert can be heard in the car, which is Autopilot's Forward Collision Warning system warning that it has detected a potential impact up ahead. Only about a second later, the car directly ahead of the dashcam vehicle slams into the rear corner of the SUV in front of it. Why? Drive safely, everybody! This infographic breaks down 52 of the most common misconceptions.

You'd think that in the age of the internet, where more information than we can possibly consume in several lifetimes is at our fingertips, stubborn myths from the past would die away. 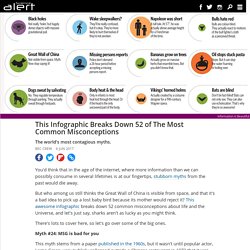 Home. 'Oleo Sponge' may be the key to cleaning up after oil spills. Log In - New York Times. 'Physics-defying' gravity hills are one of the strangest natural phenomena we've seen. Scattered across the world are a number of bewildering 'mystery spots' that appear to defy gravity - places where cars seem to drift uphill, and cyclists struggle to push themselves downhill. 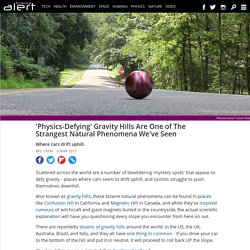 There are reportedly dozens of gravity hills around the world, in the US, the UK, Australia, Brazil, and Italy, and they all have one thing in common - if you drive your car to the bottom of the hill and put it in neutral, it will proceed to roll back UP the slope. Check out this car on a gravity hill in Aryshire, Scotland: Science Channel. Hot ice. Cheap plastic film cools whatever it touches up to 10°C. If heat is not your thing, rejoice: A thin plastic sheet may soon provide some relief from the intense summer sun. 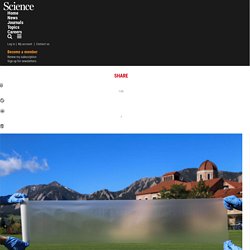 The film, made from transparent plastic embedded with tiny glass spheres, absorbs almost no visible light, yet pulls in heat from any surface it touches. Already, the new material, when combined with a mirrorlike silver film, has been shown to cool whatever it sits on by as much as 10°C. Here's what happens in your brain when you finish someone else's sentence. Neuroscientists think they've finally figured out what our brain is doing when we finish someone's sentence for them - and it goes against our current understanding of how memory and language interact. 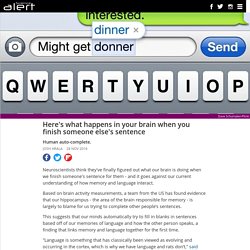 Based on brain activity measurements, a team from the US has found evidence that our hippocampus - the area of the brain responsible for memory - is largely to blame for us trying to complete other people’s sentences. This suggests that our minds automatically try to fill in blanks in sentences based off of our memories of language and how the other person speaks, a finding that links memory and language together for the first time.

"Language is something that has classically been viewed as evolving and occurring in the cortex, which is why we have language and rats don’t," said team member Robert Knight, from the University of California, Berkeley. A good way to think about these new findings is to consider your smartphone. Magnets and Marbles ! List of mnemonics. This article contains lists of some common mnemonics. 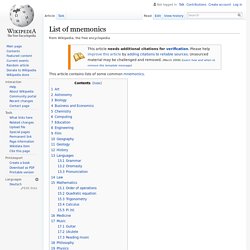 Art[edit] To remember the Elements of Art: Space, Form, Texture, Shape, Line, Value, Color. Spaceships Fly Through Space Looking Very CoolThe Fat Cat Sings Songs Very Loudly Astronomy[edit] 20 amazing things you never learned at school. We get taught a lot of things at school, but sometimes it would have helped if our teachers had found a way to demonstrate something to us visually. 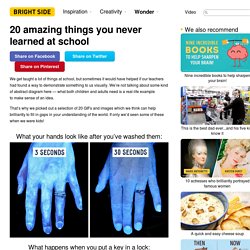 We’re not talking about some kind of abstract diagram here — what both children and adults need is a real-life example to make sense of an idea. That’s why we picked out a selection of 20 GIFs and images which we think can help brilliantly to fill in gaps in your understanding of the world. If only we’d seen some of these when we were kids! What your hands look like after you’ve washed them: What happens when you put a key in a lock: How to make sherbet. Follow this recipe to make sherbet at home, or as a part of a science experiment at school, and learn about the chemical reaction that makes it so fizzy when you put it in your mouth. 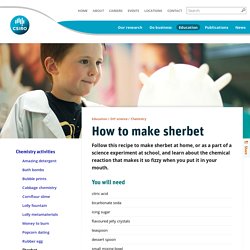 You will need citric acid bicarbonate soda icing sugar flavoured jelly crystals teaspoon dessert spoon small mixing bowl small snap lock bag. What to do Add 1 level teaspoon of citric acid to the bowl. 15 unusual but seriously effective tips to improve your communication skills. When we talk to other people, very often we can't pick up on the underlying reasons for our own behaviour. 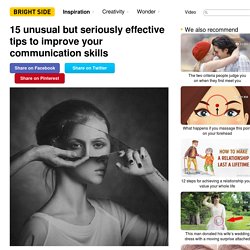 But if you observe someone else, you can often find out many interesting explanations for our own actions. And from this, it's possible to find ways to feel more comfortable during socialising and communicate better with others. Engage Your High School Science Students: Lesson Plans and Ideas. Make a Whirlybird from Paper. Key concepts Gravity Weight Lift Aerodynamics Introduction Have you ever seen a helicopter flying through the air?

Have you ever wondered how they fly—or if you could try flying one yourself? This fun activity will help you get started at home building a simple paper helicopter. And you will learn a little bit about what keeps these amazing vehicles aloft. Background Helicopters stay in the air using spinning blades that are used to generate "lift. " WGSS Teacher Skit Flash Mob - Don't Stop Believin' (Glee) - Christmas Skit 2010. 5 cool things Australian researchers have discovered. This article was written by our partners over at Swinburne University of Technology, and was originally published on their Tumblr. We've reposted it with their permission. There's plenty to celebrate when it comes to Australian science - for a relatively small population, we've made some big contributions to the world, from wi-fi to the bionic ear.

But this National Science Week, Swinburne University of Technology in Melbourne is looking back at some of their quirkier research. 1. Chew more, stress less A Swinburne study found that chewing sugar-free gum reduces anxiety by more than 17 percent during stressful situations. 2. Swinburne researchers discovered that mystery radio signals detected at the Parkes telescope were caused by opening the door of a microwave oven. 3. Swinburne researcher, Jo-Anne Abbott, discusses insomnia and an emerging treatment that may help sufferers. 4. 5.