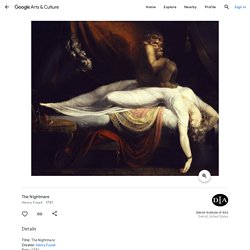 Untitled. Altered carbon. Altered Carbon. Cartoon: The Evolution of Man - The English Blog. Today's cartoon by Peter Brookes from The Times is a comment on the execution by lethal injection of Teresa Lewis in the state of Virginia. 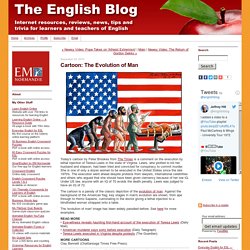 Lewis, who plotted to kill her husband and stepson, had been tried and convicted for conspiracy to commit murder. She is one of only a dozen women to be executed in the United States since the late 1970′s. The execution went ahead despite protests from lawyers, international celebrities and others who argued that she should have been given clemency because of her low IQ. Frankenstein s'est échappé. Frankenstein : genèse d'un monstre. Juin 1816, sur les rives du Lac Léman électrisées par l'orage et battues par la tempête, à l'issue d'une joute littéraire fantastique, Mary Shelley a la vision d'un monstre dont sortira la science-fiction moderne : la Créature de Frankenstein... 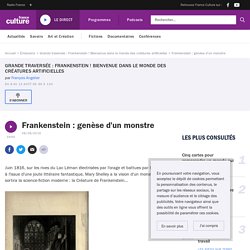 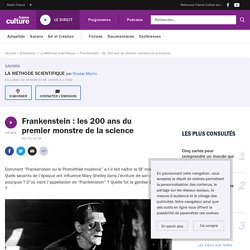 Il faudra peu de temps au public pour découvrir que l’auteur n’est pas le préfacier mais son épouse, Mary. The long shadow of Frankenstein. In January 1818, a woman barely out of her teens unleashed a terrifying tale on the world: the story of a doctor who builds a creature from scavenged body parts, then recoils in horror, spurns it, and sees his friends and family destroyed by the monster. 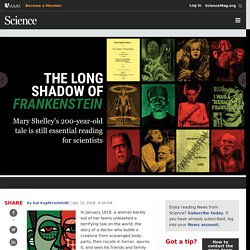 Two hundred years later, Mary Shelley's Frankenstein is still essential reading for anyone working in science. The ill-fated creator she portrays has influenced public perception of the scientific enterprise unlike any other character, forever haunting the borderland between what science can do and what it should do. The story has mutated and it has frequently been mangled. Penny Dreadful ou comment la littérature peut-elle donner naissance à une série ? 1Penny Dreadful est une série fantastique (ou d’horreur, ou dramatique, ou encore, selon Wikipedia, un thriller1) proposée par la chaîne américaine payante Showtime. 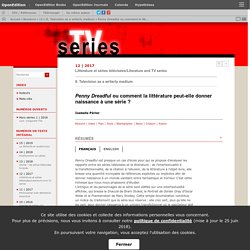 What can be done about our modern-day Frankensteins? In 1797, at the dawn of the industrial age, Goethe wrote “The Sorcerer’s Apprentice,” a poem about a magician in training who, through his arrogance and half-baked powers, unleashes a chain of events that he could not control. 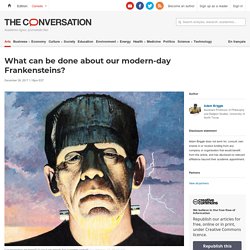 As Frankenstein Turns 200, Can We Control Our Modern "Monsters"? In 1797, at the dawn of the industrial age, Goethe wrote “The Sorcerer’s Apprentice,” a poem about a magician-in-training who, through his arrogance and half-baked powers, unleashes a chain of events he cannot control. 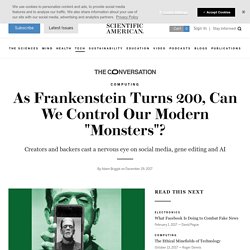 About 20 years later, a young Mary Shelley answered a dare to write a ghost story, which she shared at a small gathering at Lake Geneva. Her story would go on to be published as a novel, “Frankenstein; or, the Modern Prometheus,” on Jan. 1, 1818. Both are stories about our powers to create things that take on a life of their own. Frankenstein's Origins Trace Back to Ben Franklin. How to make a monster: what's the science behind Shelley's Frankenstein?

The bicentenary of the publication of Mary Shelley’s Frankenstein: or the Modern Prometheus has meant a lot of people are re-examining this brilliant work of science fiction. 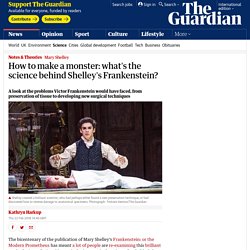 My particular interest is the science fact behind the science fiction. Why issues raised in Frankenstein still matter 200 years later. Science and technology have led to impressive improvements in health and health care. 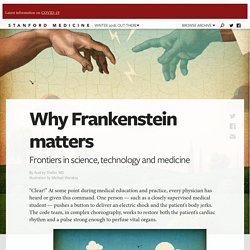 People I love are alive today because of cancer treatments unknown decades ago. We are incredibly grateful to the medical scientists who envisioned these drugs and who did the experiments to prove their effectiveness. As an anesthesiologist, I care for patients at vulnerable times in their lives; I use science and technology to render them unconscious — and to enable them to emerge from an anesthetized state. File:Frontispiece to Frankenstein 1831.jpg. Frankenstein's Footsteps: Science, Genetics and Popular Culture - Jon Turney. The real experiments that inspired Frankenstein.

Mary Shelley wrote 'Frankenstein,' and created modern horror. Born on a dark and stormy night, Frankenstein; or, the Modern Prometheus is a true masterpiece of terror that began as a fireside ghost story and grew into a worldwide phenomenon. Its teenage author, the future Mary Shelley, drew upon her nightmares to come up with a story as challenging as it is chilling. (Read about "Frankenstein" electronic plants.) The story took shape during the year without a summer, as 1816 came to be known. The 1815 eruption of the Mount Tambora volcano on the island of Sumbawa (part of modern-day Indonesia) had released vast amounts ash, rock, and sulfuric dust into the air, which dramatically lowered temperatures across many areas of the globe the following year.

Reports of odd weather came in from all quarters in 1816: summer frosts in North America, red snow in Italy, and eight weeks of nonstop rain in Ireland. The bizarre weather in 1816 also left an indelible mark on culture and literature. 'Frankenstein' Reflects the Hopes and Fears of Every Scientific Era. That Victor did not do this—that he spurned his creation the moment he had made it, merely because he judged it ugly—means that, to my mind, the conclusion we should reach is the one that the speculative-fiction author Elizabeth Bear articulates in the new volume.

It is for Victor’s “failure of empathy and his moral cowardice,” Bear says—for his overweening egotism and narcissism—that we should think ill of him, and not because of what he discovered or created. Mary Shelley, however, gives her readers mixed messages. What she shows us is a man behaving badly, but what she seems to tell us is that he is tragic and sympathetic.

Could science destroy the world? These scholars want to save us from a modern-day Frankenstein. Philosopher Nick Bostrom believes it's entirely possible that artificial intelligence (AI) could lead to the extinction of Homo sapiens. In his 2014 bestseller Superintelligence: Paths, Dangers, Strategies, Bostrom paints a dark scenario in which researchers create a machine capable of steadily improving itself. At some point, it learns to make money from online transactions and begins purchasing goods and services in the real world. Using mail-ordered DNA, it builds simple nanosystems that in turn create more complex systems, giving it ever more power to shape the world. Now suppose the AI suspects that humans might interfere with its plans, writes Bostrom, who's at the University of Oxford in the United Kingdom. It could decide to build tiny weapons and distribute them around the world covertly.

Lessons for scientists fill a newly annotated Frankenstein. The tale of Victor Frankenstein and his monstrous creation has become a universal touchstone that encapsulates our visceral fears regarding the promises, perils, and pitfalls of countless diverse areas of science and technology. This annotated volume of Mary Shelley’s original work is an effort to reintroduce the story to new generations of researchers who, like many before them, ought to take its lessons to heart.

On 1 August 1790, a precocious student named Victor Frankenstein submitted a radical proposal to an ethical panel at the University of Ingolstadt in Bavaria. Under the title "Electro-chemical Mechanisms of Animation," Frankenstein explained how he wanted to "reverse the processes of death" by collecting "a large variety of human anatomical specimens" and putting them together to try and "restore life where it has been lost.

" Frankenstein assured the institutional review board (IRB) that he had the highest ethical standards. "If I do succeed in fully animating a human or human-like creature, I will provide the creature with information about the study and allow it, if it is capable, to choose whether or not to participate further in continued observation and study," noted the budding scientist. If the creature had "diminished capacity," Frankenstein promised to bring in a third party to act in its interest and treat "the being" in accordance with recognized standards. J. Untitled. "Frankenstein", déjà 200 ans de science-fiction ? Folie et fantastique dans «Frankenstein» 1.