Paywall model breakdown: The current landscape and new frontier - Chartbeat Blog. As publishers continue investing in reader-driven revenue streams, the question of which paywall model — or models — to pursue or experiment with has been a hot topic among many of our partners. 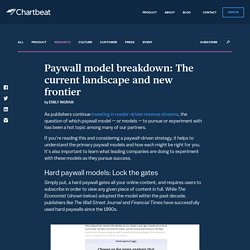 If you’re reading this and considering a paywall-driven strategy, it helps to understand the primary paywall models and how each might be right for you. It’s also important to learn what leading companies are doing to experiment with these models as they pursue success. Simply put, a hard paywall gates all your online content, and requires users to subscribe in order to view any given piece of content in full. While The Economist (shown below) adopted the model within the past decade, publishers like The Wall Street Journal and Financial Times have successfully used hard paywalls since the 1990s. Newsonomics: CEO Mark Thompson on offering more and more New York Times (and charging more for it) There’s friction. 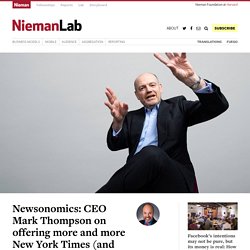 And then there’s stupid friction. Everyone in the subscription business decries friction, putting too many steps between the would-be buyer and the buy itself. Enter your credit card number; type in your address; pick a username and password; sorry, your password must have at least 3 uppercase characters, 2 lowercase characters, a number greater than 6, and any two of %, &, and #.

Too many words, pages, clicks. AIMC lanza medición “Brand Media” EGM/Comscore - ProgPublicidad. Local News Initiative. The financial bedrock of the American news industry has shifted radically, with advertising revenue no longer able to support the journalism that the public has long depended upon. 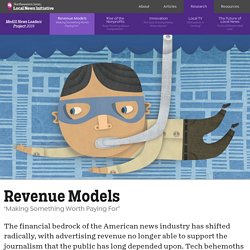 Tech behemoths like Facebook and Google are reaping much of the ad money that once went to local news outlets. According to the Pew Research Center, the newspaper industry’s ad revenue fell 13 percent in a single year, from 2017 to 2018. Guardian sets goal of 2m supporters in next stage of ambitious strategy. The Guardian has set a target to attract 2 million paying supporters in the next three years, with the aim of securing the future of its journalism output in a tough media environment. 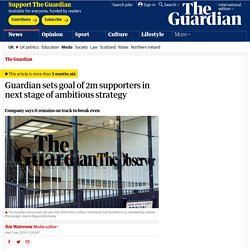 After a three-year period during which costs have been reduced, revenues increased and the landmark of 1 million paying contributors across web and paper reached, the editor-in-chief, Katharine Viner, and the Guardian Media group chief executive, David Pemsel, unveiled the next stage of their strategy. “One of the great successes of the past three years has been the willingness of readers to support our journalism and our purpose,” they said in an email to staff on Wednesday. “As we look ahead, we are setting a new goal for the whole organisation: to attract 2 million people to support the Guardian financially by the end of our 200th anniversary year, in 2022.” “Three years ago, the Guardian faced severe financial challenges,” they said in the memo. Guardian sets goal of 2m supporters in next stage of ambitious strategy. Publishing News UK: Guardian Turns a Profit. “The Guardian has been consistently loss-making,” read the Wikipedia entry on the publication, till yesterday.

It was quickly edited after the British daily announced that The Guardian and the Observer have broken even—for the first time in 20 years—aided by record online traffic, reduced costs and increased financial contributions from readers. “Guardian News & Media recorded an £800,000 operating profit for the 2018-19 financial year – compared with a £57m loss three years previously,” the company said, “ensuring the business is existing on a sustainable basis following the culmination of a turnaround programme put in place following years of substantial losses.” This is a remarkable feat in an extremely challenging market, especially since The Guardian’s model is unique among news publishers. It keeps its journalism outside a paywall, while asking readers to contribute to help subsidize its reporting. By Monojoy Bhattacharjee Related posts. Publishing News UK: Guardian Turns a Profit. Publishing News UK: Guardian Turns a Profit.

Publishing News UK: Guardian Turns a Profit. Inside the Guardian's journey to profitability. "On the whole, there were pockets who entirely believed that it was possible, and there were others who genuinely had some concerns and doubts, because some of the numbers that we were putting against things like our reader revenues were pretty hefty," he said. 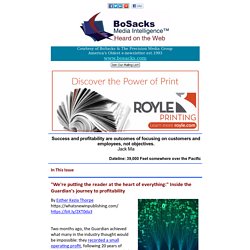 "And the reality was, over three years, we didn't necessarily have a detailed financial plan, but we did have a framework, and that framework was made up of some assumptions in the outer years around what we'd be getting from some of these numbers. "I remember looking at the ones in the advertising world thinking, how on earth are we going to go from where we are now to that? " Nicklin credits this framework with pushing people to do things differently, and says that it focused people's minds in the business. Are Paywalls Saving Newspapers? Media outlets large and small have adopted digital paywalls to augment dramatic declines in print revenues, but given their negative effect on website traffic (and, in turn, online advertising), are paywalls an effective sales strategy? 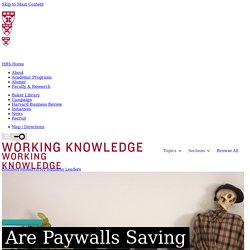 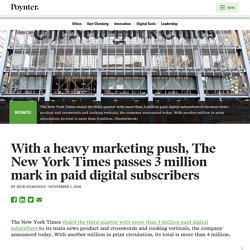 With another million in print circulation, its total is more than 4 million. For the quarter, the Times added just over 200,000 digital subscribers net: 143,000 for the main news product, another 60,000 for the two specialty sites. That result was achieved only with a heavy marketing push, Times executives explained in a conference call with financial analysts. What it takes to shift a news organization to reader revenue. Launching a paywall is easy. 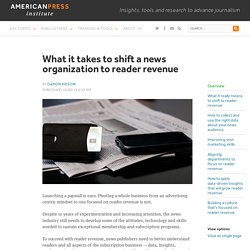 Pivoting a whole business from an advertising-centric mindset to one focused on reader revenue is not. Despite 10 years of experimentation and increasing attention, the news industry still needs to develop some of the attitudes, technology and skills needed to sustain exceptional membership and subscription programs. Anuncios de rich media que más engagement generan para tu marca - Antevenio. ¿Por qué no hay un Spotify para noticias? How The New York Times plans new subscription products. Dear Publishers, if you want my subscription dollars (or euros), here is what I expect… Netflix frente a Hollywood: la supremacía de los modelos analíticos. De Correspondent gets cash injection from Omidyar Network for global launch. De Correspondent, a reader-funded news publisher based in the Netherlands, announced Monday that it has raised $950,000 from Omidyar Network—an investment fund set up by billionaire eBay co-founder Pierre Omidyar—to finance the launch of a global version of the site known as The Correspondent. 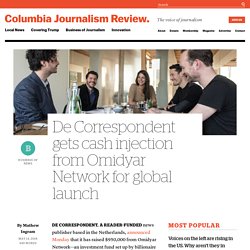 The new funding brings the total raised for that expansion to $1.8 million. De Correspondent launched in 2013 with a crowdfunding effort that raised $1.7 million and has grown steadily ever since, funded primarily by its readers (which it prefers to call “members”). The site now has more than 60,000 paying subscribers. The headquarters of the global version will be in the US. Co-founder Ernst-Jan Pfauth, the former head of digital strategy for the Dutch newspaper NRC Handelsblad, said the funding from Omidyar Network will allow De Correspondent to undertake a marketing campaign for its expansion. Download the DIS 2018 speaker presentations. View and download the speaker presentations from the Digital Innovators' Summit, 18-20 March, Berlin. 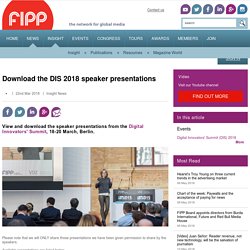 Please note that we will ONLY share those presentations we have been given permission to share by the speakers. Available presentations are listed below. Any problems/questions? Ask Sylkia. How the New York Times is convincing commercial partners to pay for its journalism. The New York Times had a wish list. It wanted coverage of the emerging human subcultures that young journalists can be so adept at spotting, and it wanted to report them in a way that was visually arresting and likely to thrive on social media as well as its own platforms. Its solution was a remarkable project called Surfacing, which has generated features on subjects as diverse as a female “Roller Derby” team made up of members from indigenous peoples from around the world, and the Black Panther “cosplayers” who like to dress up in the outfits of characters from the recent Hollywood fantasy film. But perhaps stranger than all of that is the fact that this editorial project from the world’s most famous newspaper title is underwritten by a snack brand, Véa, a trendy cracker made without artificial ingredients.

Introducing Subscribe with Google. What Could Blockchain Do for Journalism? – Welcome to Blockchain. Billionaire-Proofing the News When Ricketts shuttered Gothamist and DNAinfo, and when Thiel’s lawsuit killed Gawker, there was a real danger that the crucial journalism all three sites did would not only cease, but be wiped from history entirely, their archives expunged. The immutability and permanence of information on the blockchain would make that nearly impossible. “They’re ‘billionaire-proofing’ journalism, and I think that’s crucial now,” Moore says of Civil. Civil is being developed in partnership with Consensys, a software incubator for applications on the Ethereum platform. Ethereum’s token, ether, is the second-largest cryptocurrency after bitcoin, with a market cap of over $70 billion; while bitcoin is largely a medium of exchange and investment, Ethereum is a customizable full-service platform onto which applications like Civil can be built. ADC - Video Estrategias Marketing Digital 2018.

In two words, show humility, says an author who has been following billionaires buying media properties. Trust and humility are what Jeff Bezos, the world’s richest person, has shown since buying the Washington Post in 2013, says Dan Kennedy, author of of "The Return of the Moguls: How Jeff Bezos and John Henry Are Remaking Newspapers for the 21st Century. " WordPress Barcelona: ¿Cómo monetizar nuestro proyecto web? Formatos de publicidad nativa (native ads) In the digital age, The New York Times treads an increasingly slippery path between news and advertising - Columbia Journalism Review. The April 2 edition of the Sunday New York Times, where the paper features its best journalism, included a six-page special section, “Women Today,” pegged to a summit in Manhattan a few days later.