Has “Homosexual” always been in the Bible? — forge. As I was talking with my friend I said, “I wonder why not until 1983?

Was their influence from America?” So we had our German connection look into it again and it turns out that the company, Biblica, who owns the NIV version, paid for this 1983 German version. Thus it was Americans who paid for it! In 1983 Germany didn’t have enough of a Christian population to warrant the cost of a new Bible translation, because it’s not cheap. CDC Now Officially Agrees That People With HIV CANNOT Sexually Transmit The Virus If Their Viral Load Is Undetectable. Clinical trials over the years have shown that HIV-positive people on anti-retroviral therapy (ART) with an undetectable viral load cannot sexually transmit the virus to an HIV-negative person. 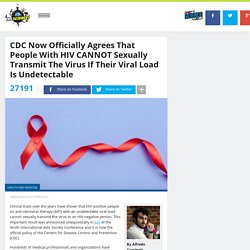 This important result was announced unequivocally in July at the Ninth International Aids Society Conference and it is now the official policy of the Centers for Disease Control and Prevention (CDC). Hundreds of medical professionals and organizations have committed to the undetectable=untransmittable (U=U) pledge. The CDC accepting this is a fantastic step forward and will help challenge the stigma HIV-positive people still face today. HIDDEN CAMERA: Gay Wedding Cake At Muslim Bakeries.

Gay Asian-American Filmmaker Hieu Tran. On a routine work-related google images search, I ran across an intriguing pic of two very handsome, well-built, topless young men in a confrontational pose (the one below). 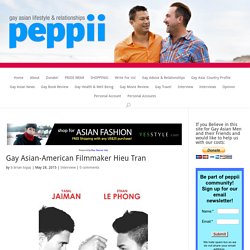 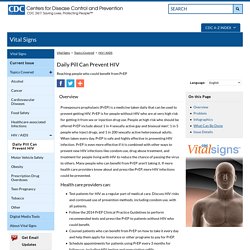 PrEP is for people without HIV who are at very high risk for getting it from sex or injection drug use. People at high risk who should be offered PrEP include about 1 in 4 sexually active gay and bisexual men*, 1 in 5 people who inject drugs, and 1 in 200 sexually active heterosexual adults. When taken every day, PrEP is safe and highly effective in preventing HIV infection. PrEP is even more effective if it is combined with other ways to prevent new HIV infections like condom use, drug abuse treatment, and treatment for people living with HIV to reduce the chance of passing the virus to others. Many people who can benefit from PrEP aren't taking it. Health care providers can: Test patients for HIV as a regular part of medical care. Every LGBTQ+ Person Should Read This  Dearest Queer Person, Chances are you don't even know that you are holy, or royal or magic, but you are. 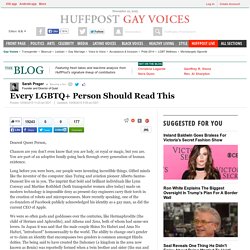 You are part of an adoptive family going back through every generation of human existence. Long before you were born, our people were inventing incredible things. Gifted minds like the inventor of the computer Alan Turing and aviation pioneer Alberto Santos-Dumont live on in you. The imprint that bold and brilliant individuals like Lynn Conway and Martine Rothblatt (both transgender women alive today) made on modern technology is impossible deny as present-day engineers carry their torch in the creation of robots and microprocessors.

We were so often gods and goddesses over the centuries, like Hermaphrodite (the child of Hermes and Aphrodite), and Athena and Zeus, both of whom had same-sex lovers. Our ability to transcend gender binaries and cross gender boundaries was seen as a special gift. Savage Love Letter of the Day: God Hates Fags Blah Blah Blah. Remember this guy from earlier this morning? 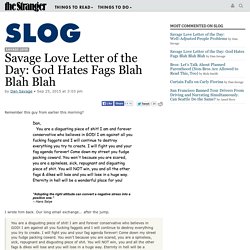 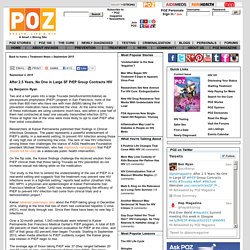 The paper represents a powerful endorsement of PrEP’s ability, in a real-world setting, to prevent HIV infection among those at very high risk of contracting the virus. 10 Animals You Didn’t Know Are Proudly Bisexual. All animals on this planet share a common ancestry. 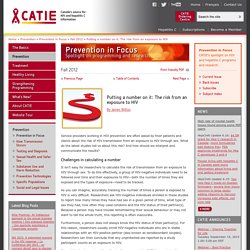 What do the latest studies tell us about this risk? And how should we interpret and communicate the results? AHF Highlights “Reaching Common Ground on PrEP” in New National Ad Campaign. PrEP - HIV Basics - HIV/AIDS. CDC recommends that PrEP be considered for people who are HIV-negative and at substantial risk for HIV. 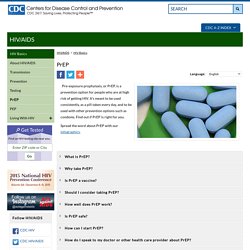 For sexual transmission, this includes anyone who is in an ongoing relationship with an HIV-positive partner. It also includes anyone who 1) is not in a mutually monogamous* relationship with a partner who recently tested HIV-negative, and 2) is a. Here’s What We Actually Know About The Pill That Prevents HIV. NOODLE MAGAZINE: Re-Surfaced and Re-Published After 13 Years! Yes, I was the publisher of NOODLE MAGAZINE and along with my close friends Chris Bucoy-Brown, Chris Young and many writers, contributors, photographers, models and volunteers, we published 6 quarterly issues from 2002-2003. Everyone voluntereed their time and talents to our magazine because we all felt it was about time to have us represented on newstands and in our lives.

Our mission was pretty simple. We at noodle wanted to let you know a little bit about us. Actually, noodle is a little bit about you. Marcus Carey: Regarding same-sex marriages, county clerks are ruled by ‘rule of law,’ pledge of duty. If I could please, let me try to add a voice of reason to the debate involving county clerks who believe that issuing marriage licenses to same sex couples compromises their religious, moral or other principles.

First of all let us remember that the hallmark of our nation is that we are ruled by law, not by men. The phrase “the rule of law” does not mean “the rules of law” as in “the rules of golf”. The word is “rule”, not “rules” and in proper context it means the same thing as “the rule of King George” or “living under Communist rule.” A Point of View: Why are opponents of gay marriage so sure they're right? Critics of gay marriage often base their arguments on the certainty of their religious convictions. But societies without doubt are dangerous places, argues Adam Gopnik. One of the strangest consequences of the recent Supreme Court decision here in the US - the one that made marriage between people of the same sex legal in all 50 states - is the amazing persecution mania it has engendered among religious people who don't agree with it.

They don't just disagree with the decision, as of course they would. They feel threatened by it. They feel that the reality that men in San Francisco are now fighting over who should be first in line to rent formalwear has thrown them, the faithful, back into the catacombs, where they tremble at the tread of the legions and hear the distant roar of lions. It's hard to know why. Mayor Of Conservative Texas Town Delivers Powerful Response To Gay Marriage Opponents. Glogin?mobile=1&URI= What Happened Inside the Supreme Court Today. As 90 minutes of oral arguments in the nation's high court concluded, reports began trickling out about what transpired as the nine justices considered whether the U.S.

Constitution guarantees same-sex couples the right to marry. A second set of oral arguments, scheduled for one hour, considered whether the Constitution requires states to recognize same-sex marriages legally performed in other states. Find updates about the first portion of the hearing below, and read The Advocate's blow-by-blow report from the second half of the hearing here. In her opening statement for the consolidated case originating in Ohio, Obergefell v. Hodges, pro-equality attorney Mary Bonauto noted that the love, commitment, and mutual support shared by married same-sex couples is equal to that of opposite-sex spouses, but that same-sex couples are denied the legal protection afforded to opposite-sex couples. Fraternal Birth Order and Kickstarting Homosexuality in the Womb.

Researchers of fraternal birth order effect argue that sexual orientation correlates with an individual’s number of older brothers. Could this help to explain the homophobia of some traditional religious societies? Reading an excerpt from the book Sex and War has got me thinking about the fight between the Mormons and California’s Proposition 8 that took place between 2008 and 2013. Sex and War features a meditation on how biology might help to explain why and how humans kill each other. The battle between the Mormons and the LBGT civil rights movement, most famously waged over the Mormon’s support of California’s anti-gay Prop. 8, did not turn bloody, but I can’t help but think about the interesting biological background to all of this. Charice, Former 'Glee' Star, Comes Out As Gay. 20 Must-Read Books We Missed Last Year.

EXCLUSIVE: Undercover At NOM's Anti-Gay Student Conference. Every summer for the past four years, the National Organization for Marriage's (NOM) Ruth Institute has invited college students from across the country to participate in its weekend-long "It Takes A Family To Raise A Village" (ITAF) conference in San Diego, CA. According to NOM, the conference is meant to prepare college students to defend "natural marriage" on their campuses by introducing them to a number of prominent anti-gay speakers and activists.

This year, NOM expanded its ITAF conference to include recent college graduates in their early twenties.