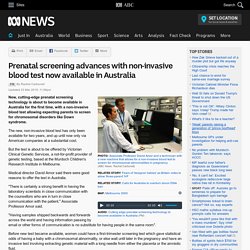 The new, non-invasive blood test has only been available for two years, and up until now only via American companies at a substantial cost. But the test is about to be offered by Victorian Clinical Genetic Services, a not-for-profit provider of genetic testing, based at the Murdoch Children's Research Institute in Melbourne. Medical director David Amor said there were good reasons to offer the test in Australia. "There is certainly a strong benefit in having the laboratory scientists in close communication with the counsellors who are in turn in close communication with the patient," Associate Professor Amor said.

The company has invested in two machines at a cost of about $250,000 each, which will allow it to deliver the test in Victoria. ABC News. 'I'm Scottish': Gutted Lambie to quit Senate in latest citizenship shock Jacqui Lambie broke down in a radio interview this morning as she confirmed she will resign from the Senate because she holds British citizenship, telling listeners she always thought she was "Australian as they bloody come". 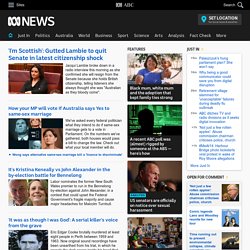 How your MP will vote if Australia says Yes to same-sex marriage We've asked every federal politician what they intend to do if same-sex marriage gets to a vote in Parliament. On the numbers we've gathered, both houses would pass a bill to change the law. Check out what your local member will do. Wong says alternative same-sex marriage bill a 'licence to discriminate' It's Kristina Keneally vs John Alexander in the by-election battle for Bennelong Labor nominates the former New South Wales premier to run in the Bennelong by-election against John Alexander, in a contest that could upset the Federal Government's fragile majority and cause major headaches for Malcolm Turnbull. BBC Bitesize - Home.

10 Emerging Ethical Dilemmas in Science and Technology. The John J. 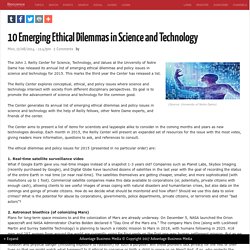 The ethical dilemmas and policy issues for 2015 (presented in no particular order) are: 1. 2. 3. 4. 5. 6. 7. 8. 9. 10. Science debate: Should we embrace an enhanced future? Image copyright Science Photo Library To write this article, I drank a beverage containing an effective cognitive enhancer - something that helps me - almost daily - to focus. 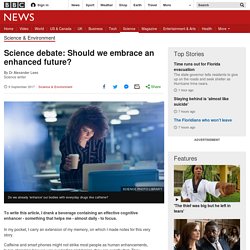 In my pocket, I carry an extension of my memory, on which I made notes for this very story. Caffeine and smart phones might not strike most people as human enhancements, but in changing how we use our bodies and brains, they are exactly that. They improve our subjective wellbeing and facilitate our meeting day-to-day life goals. The rather more futuristic-sounding concept of transhumanism - the idea that every human should have the right to enhance themselves beyond the so-called "norm" through science and technology - was the subject under scrutiny at a debate this week at the British Science Association Festival in Brighton.

The big question being posed: do we all have the right to enhance our bodies as technology and pharmaceuticals will allow, or is that immoral? Moral drug maze Are we all enhanced? Frosty reception. The Ethics of Genetics.