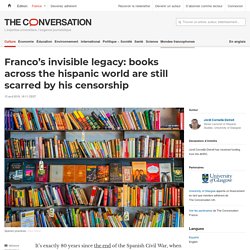 Decades after his death, Franco continues to cast a long shadow over Spain, from the rise of the far-right Vox party to the hundreds of mass graves of people who died in the war that are still waiting to be exhumed. One other hugely important legacy that few people are aware of is the continuing effect on books, both in Spain and throughout the Spanish-speaking world. To this day, translations of many world classics and works of Spanish literature are being reprinted using expurgated texts approved by the dictator’s censors – often without publishers even realising it, let alone readers. Siete logros del 15-M, siete años después. La música del 15M. En Portada. 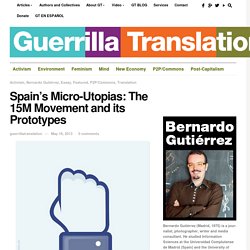 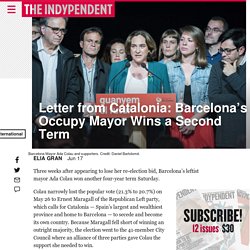 Colau narrowly lost the popular vote (21.3% to 20.7%) on May 26 to Ernest Maragall of the Republican Left party, which calls for Catalonia — Spain’s largest and wealthiest province and home to Barcelona — to secede and become its own country. Because Maragall fell short of winning an outright majority, the election went to the 41-member City Council where an alliance of three parties gave Colau the support she needed to win. In addition to receiving 10 votes from Barcelona en Comú, the party she leads, Colau cobbled together a majority by receiving eight votes from the Socialists and three from the conservative pro-European Union party of Manuel Valls.

Both Valls and the Socialists oppose Catalonian independence. Colau has refused to support or oppose the secessionist movement while criticizing the Spanish government’s crackdown on its leaders. “El discurso político español actual considera peligrosos por igual a nacionalismos, populismos y feminismos por su 'exceso' de emoción” In a Polarized Spain, Voters Give the Socialists Another Chance.

Hunched over the podium with her head in her hands, Irene Montero found herself in disbelief. 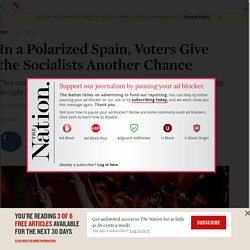 Montero, the leading congressional candidate for Unidas Podemos, was participating in the first of several national debates in the run-up to Spain’s snap general elections, which took place on Sunday. She had just witnessed Cayetana Álvarez de Toledo, a Spanish aristocrat and leading congressional candidate for the conservative Partido Popular (PP), pull out all the stops to criticize a law on gender violence and affirmative consent proposed by the Spanish left. The law, Álvarez said, “turned the cause for women into a confrontation between women and men.” She added, “Do you really go around saying, ‘yes, yes, yes’ all the way through till the end?” Los 30.000 niños robados del Franquismo - El Salto. Time to Bury the Dead. Interview by Tommy Greene Eoghan Gilmartin. 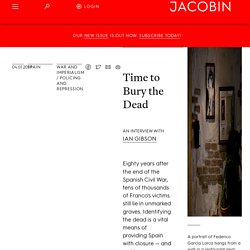 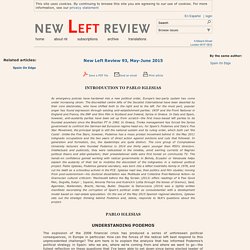 How can the forces of the radical left best respond to this unprecedented challenge? The aim here is to explain the analysis that has informed Podemos’s political strategy in Spain: who we are, where we’re coming from and where we want to go—the fullest reflection on these questions that I’ve been able to set down since being elected leader of Podemos last November. It’s also an opportunity to speak in my own voice, outside the format of mainstream media interviews. Otra Vuelta de Tuerka - Pablo Iglesias con Manuel Castells (Programa Completo) NPR Choice page. Spain’s Radical Right Is Here to Stay—but Did It Ever Leave? “We have come here to call out those who are responsible for Spain’s disunion and downfall—and to engage them in combat.” 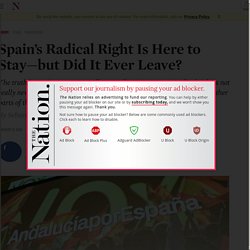 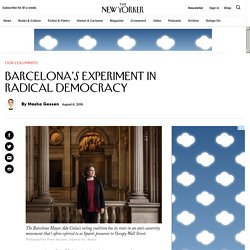 A banner over the entrance to the fourteenth-century building reads, in Catalan, “Free Political Prisoners”—a reference to Catalan pro-independence activists, some of whom have been prosecuted while others were forced into exile by the national government in Madrid. The banner was placed here by the city government, which is indeed run by protesters: the ruling coalition of Mayor Ada Colau has its roots in the Indignados, the anti-austerity movement that’s often referred to as Spain’s precursor to Occupy Wall Street. Postwar Spain: America’s shameful rapprochement to the Franco dictatorship. On December 6, 1947, the military attaché at the Spanish Embassy in Washington DC sent an encrypted telegram back to Spain’s Central General Staff. 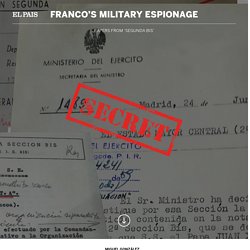 The decoded message read as follows: “The current three [in the US Army] received reply to memorandum directed jointly by Army and Navy to State [Department] regarding the need to radically and urgently improve relations with Spain [...]. In the highly secret document, the State [department] says literally: relations with Spain in all their aspects will be normalized quickly without a sound or statements to the press. Spanish government approves exhumation of Francisco Franco. Spain has taken another step towards dealing with the legacy of the civil war after the government approved the exhumation of the remains of Francisco Franco, which have lain in the Valley of the Fallen mausoleum near Madrid since his death in 1975. 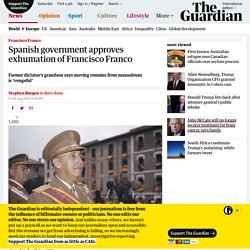 The council of ministers voted in favour of the move, which was opposed by the rightwing People’s and Citizens parties. However, the decree only needed a simple majority to pass. The Socialist party of the prime minister, Pedro Sánchez, the leftwing Podemos and the Catalan and Basque nationalist parties all voted in favour. Barcelona’s Experiment in Radical Democracy. Del hedonismo triste al decrecimiento feliz: hacia una imaginación política de la empatía. Orígenes e historia. Lengua catalana. Franco: a spectre from the past in Spain. A little over 40 years ago, on the 20th November 1975, General Francisco Franco died of natural causes in Madrid, just as he was about to celebrate his 83rd birthday. By that time he had been for almost 40 years, from October 1st, 1936, the head of a dictatorial regime with the title of ‘Caudillo of Spain by the Grace of God’.

The word “Caudillo” (Leader) was not mere flattery, quite the contrary. It was the legal formula to define the supreme political authority and main institutional office he held during his entire life as a dictator. Franco: a spectre from the past in Spain. Represión: "España es un estado de excepción": el yo acuso de los investigadores en el exilio. Interview: Adam Hochschild, Author Of 'Spain In Our Hearts' Italian troops take part in a Nationalist victory parade in Madrid on May 19, 1939. Military aide from Italian dictator Benito Mussolini helped Gen.