Sucesso na Europa da crise, chega ao Brasil BlaBlaCar, o “Uber da carona” The moment I learned just how far Uber will go to silence journalists and attack women. By Sarah Lacy On November 17, 2014 A big debate among the Pando staff for the past two years has been over just how morally bankrupt Uber is. 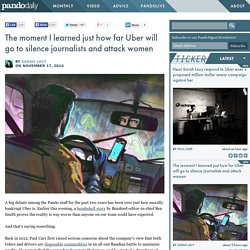 Earlier this evening, a bombshell story by Buzzfeed editor-in-chief Ben Smith proves the reality is way worse than anyone on our team could have expected. And that’s saying something. Back in 2012, Paul Carr first raised serious concerns about the company’s view that both riders and drivers are disposable commodities in an all-out Randian battle to maximize profits. It's Already Over And Uber Has Won - BuzzFeed News. Now we know how many drivers Uber has — and have a better idea of what they’re making​ A woman leaves the headquarters of Uber in San Francisco. 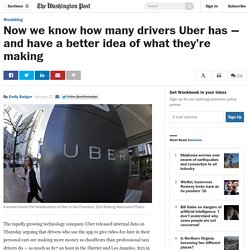 (Eric Risberg/Associated Press) The rapidly growing technology company Uber released internal data on Thursday arguing that drivers who use the app to give rides-for-hire in their personal cars are making more money as chauffeurs than professional taxi drivers do — as much as $17 an hour in the District and Los Angeles, $23 in San Francisco and $30 in New York. Meet the Lawyer Fighting Uber’s Business Model. One of the perks of being a top Uber driver is the company’s employee-of-the-week award. 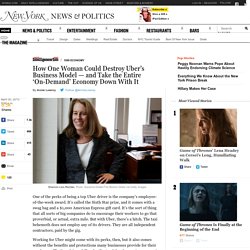 It’s called the Sixth Star prize, and it comes with a swag bag and a $1,000 American Express gift card. It’s the sort of thing that all sorts of big companies do to encourage their workers to go that proverbial, or actual, extra mile. Ubernomics. In trying to push its case with the public, Uber decided to share its internal data with Alan Krueger, a prominent Princeton economist and former head of President Obama's Council of Economic Advisers. 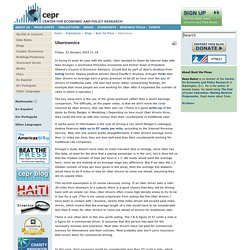 (Could this be part of Uber's dividend from hiring former Obama political adviser David Plouffe?) Anyhow, Kreuger finds that Uber drivers on average earn a gross premium of $6.00 an hour over the pay of drivers of traditional cabs. (He also had some rather unsurprising findings, for example that more people are now working for Uber after it expanded the number of cities in which it operates.) The key issue here is the use of the gross premium rather than a direct earnings comparison. The difficulty, as the paper notes, is that we don't know the costs incurred by Uber drivers, who use their own car. A useful piece of information is the cost of driving a car, which Badger's colleague, Andrea Peterson tells us is 57 cents per mile, according to the Internal Revenue Service.

Who are the Uber Drivers? What kind of workers are driving for Uber? 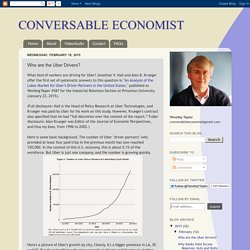 Jonathan V. Hall and Alan B. Krueger offer the first set of systematic answers to this question in "An Analysis of the Labor Market for Uber’s Driver-Partners in the United States," published as Working Paper #587 for the Industrial Relations Section at Princeton University (January 22, 2015). (Full disclosure: Hall is the Head of Policy Research at Uber Technologies, and Krueger was paid by Uber for his work on this study. However, Krueger's contract also specified that he had “full discretion over the content of the report.” The Difference Between Uber and Airbnb. Uber and Airbnb have a lot in common: They are the tech startup darlings of the moment, they are valued in the tens of billions of dollars and make significant revenue, they connect the convenience of the Internet to the online world, they are unpopular all over the world with incumbents and regulators and they exist by virtue of the non-employees who do the real work of renting their homes and driving their cars. 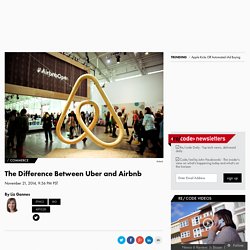 But where Uber is increasingly seen as an untrustworthy company due to its cutthroat handling of pricing, drivers, passengers and critical press — Airbnb is working to cultivate a very different image. This weekend, Airbnb invited 1,500 of its hosts to San Francisco for a summit called Airbnb Open to celebrate them, ask for feedback and connect them to one another. 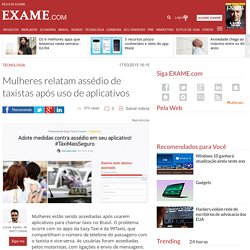 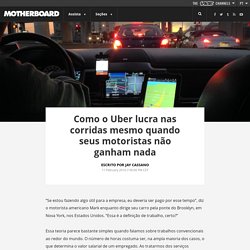 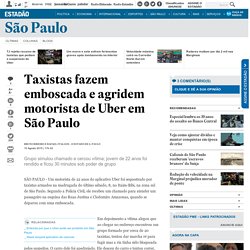 This is Uber's playbook for sabotaging Lyft. Uber is arming teams of independent contractors with burner phones and credit cards as part of its sophisticated effort to undermine Lyft and other competitors. 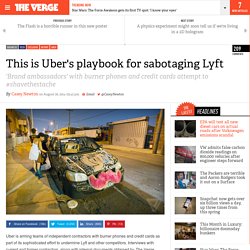 Interviews with current and former contractors, along with internal documents obtained by The Verge, outline the company’s evolving methods. Using contractors it calls "brand ambassadors," Uber requests rides from Lyft and other competitors, recruits their drivers, and takes multiple precautions to avoid detection. The effort, which Uber appears to be rolling out nationally, has already resulted in thousands of canceled Lyft rides and made it more difficult for its rival to gain a foothold in new markets. Uber calls the program "SLOG," and it’s a previously unreported aspect of the company’s ruthless efforts to undermine its competitors.

Together, the interviews and documents show the lengths to which Uber will go to halt its rivals’ momentum. ‘A special ongoing project’ What If Uber Were a Unionized, Worker-Owned Co-Op? These Denver Cabbies Are Making It Happen by Mary Hansen. Wolde Gebremariam is one of more than 160,000 people nationwide who drive their own cars for Uber. Based in Denver, Gebremariam, age 28, drives his Chevy SUV for the company and occasionally works as a private limo driver.

“The labor movement has to bring ownership and equity into the picture.” At the Uber for home cleaning, workers pay a price for convenience. Anthony Walker travels an hour and a half for a two-and-a-half-hour job for Homejoy, a cleaning services Web start-up. (Lydia DePillis/The Washington Post) It’s 7:45 a.m., and 4-year-old Cheyenne skips out the door of her squat apartment complex in Southeast Washington, D.C., stamping her feet to make the lights in her sneakers twinkle.

She has to go to day care on this morning in July, because for the past few weeks — unlike the months and months before — her father, Anthony Walker, has a job. Understanding “New Power” We all sense that power is shifting in the world. We see increasing political protest, a crisis in representation and governance, and upstart businesses upending traditional industries. But the nature of this shift tends to be either wildly romanticized or dangerously underestimated. There are those who cherish giddy visions of a new techno-utopia in which increased connectivity yields instant democratization and prosperity. The corporate and bureaucratic giants will be felled and the crowds coronated, each of us wearing our own 3D-printed crown. Uber Drivers Say They're Making Less Than Minimum Wage. Pablo Blazquez Dominguez/Stringer/Getty Images Uber likes to tell the world that the median salary for UberX drivers is ~$90,000 per year in New York.

Turns out that number might be a bit of an exaggeration. We spoke with more than a dozen Uber drivers to see how much money they were making, and none of the numbers they gave were even close to $90,000. Stop Saying Uber Is Part Of The Sharing Economy. The sharing economy is a fast-growing phenomenon. People increasingly share their home, car, clothing or tools on Internet platforms such as Airbnb, Relayrides, and Peerby. Along with its rapid growth, however, the sharing economy has also come under fire. This criticism focuses in particular on the new taxi service UberX (or UberPOP in Europe) that enables anyone to work as an "amateur driver.