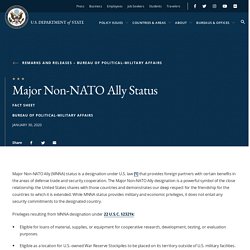 The Major Non-NATO Ally designation is a powerful symbol of the close relationship the United States shares with those countries and demonstrates our deep respect for the friendship for the countries to which it is extended. While MNNA status provides military and economic privileges, it does not entail any security commitments to the designated country. Privileges resulting from MNNA designation under 22 U.S.C. §2321k: Eligible for loans of material, supplies, or equipment for cooperative research, development, testing, or evaluation purposes.Eligible as a location for U.S.

How is China modernizing its nuclear forces? The advent of nuclear weapons fundamentally transformed the nature of warfare and strategy. 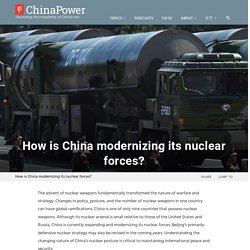 Changes in policy, posture, and the number of nuclear weapons in one country can have global ramifications. China is one of only nine countries that possess nuclear weapons. Outside the Wire: U.S. Military Deployments and Public Opinion in Host States. 2018 National Defense Strategy Summary. Why America Needs a New Way of War. Executive Summary For the first time in decades, it is possible to imagine the United States fighting—and possibly losing—a large-scale war with a great power. 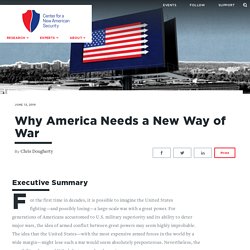 Why the U.S. Needs a Revolution in Military Affairs. In 1898, a Polish banker and self-taught military expert named Jan Bloch published The Future of War, the culmination of his long obsession with the impact of modern technology on warfare. 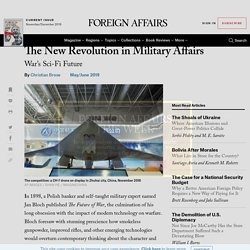 Bloch foresaw with stunning prescience how smokeless gunpowder, improved rifles, and other emerging technologies would overturn contemporary thinking about the character and conduct of war. (Bloch also got one major thing wrong: he thought the sheer carnage of modern combat would be so horrific that war would “become impossible.”)

What Bloch anticipated has come to be known as a “revolution in military affairs”—the emergence of technologies so disruptive that they overtake existing military concepts and capabilities and necessitate a rethinking of how, with what, and by whom war is waged. Why America Needs a New Way of War. Russia and China Are Increasingly Able to Attack U.S. Bases and Logistics Networks, Which Will Undermine the U.S. Way of War. For most of its history, the United States has had the luxury of fighting its wars from safe havens. 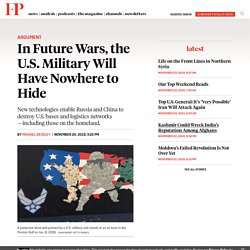 No major international battles have taken place on the continental United States in more than two centuries, and its offshore territory has not suffered a serious attack since Japan bombed Pearl Harbor in World War II. Macron's 'NATO Brain Death' Quote Shows Why the US Has Always Outplayed France. Read: Emmanuel Macron expounds as the world burns The current French president is, in short, a throwback to his predecessor Charles de Gaulle, who resuscitated France’s self-esteem after the grief of occupation in World War II. 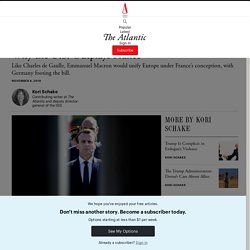 Like de Gaulle, Macron would unify Europe under France’s conception, with Germany footing the bill. Like de Gaulle, Macron envisions the United States, the United Kingdom, and France (representing Europe) bringing their military power into a Directorate of Three to determine security policies for the West. But the strategy runs aground, both for de Gaulle and for Macron, on two shoals. First, France hasn’t yet convinced its European partners that it is more reliable than the United States.

The second difficulty is that Macron expects other Europeans to increase their military contributions while not taking their concerns into account. Read: How populism took root in France. Implications of climate change for us army army war college 2019. The Geopolitics of Brazil: An Emergent Power's Struggle with Geography. To this day, Brazil has very few major highways and railways because even where the topography does allow for the possibility, the costs still are much higher than in flatter lands farther south. 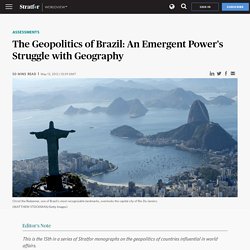 The country lacks a major coastal road system, as the escarpment is simply too steep and too close to the coast. Following the Brazilian coastline makes clear how Brazil's coastal roads are almost exclusively two-lane, and the coastal cities — while dramatic — are tiny and crammed into whatever pockets of land they can find. Why the US has nuclear weapons in Turkey – and may try to put the bombs away. As the Syrian crisis pits Turkish troops against former U.S. 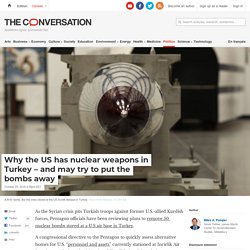 -allied Kurdish forces, Pentagon officials have been reviewing plans to remove 50 nuclear bombs stored at a U.S air base in Turkey. A congressional directive to the Pentagon to quickly assess alternative homes for U.S. “personnel and assets” currently stationed at Incirlik Air Base is part of a broader bipartisan bill, still being debated, that proposes sanctions against Turkey. President Donald Trump has been forced to issue public reassurances that the weapons are secure. Colby 01 29 19. Restoring U.S. Power Projection Capabilities: Responding to the 2018 National Defense Strategy. The 2018 National Defense Strategy recognizes that the capabilities of U.S. military forces have been eroding vis-à-vis those of key adversaries, especially China and Russia. 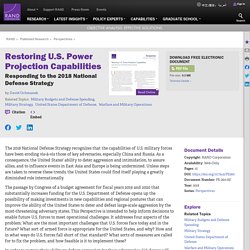 As a consequence, the United States' ability to deter aggression and intimidation, to assure allies, and to influence events in East Asia and Europe is being undermined. Unless steps are taken to reverse these trends, the United States could find itself playing a greatly diminished role internationally. SF 278.