Amalaki (Phyllanthus emblica) - Amalaki, commonly known as “Indian gooseberry “ is one of the most significant herb for therapeutic purposes in both Ayurveda and Allopathic field. 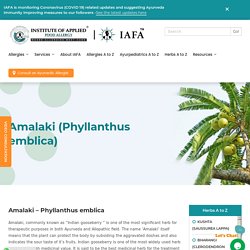 The name ‘Amalaki’ itself means that the plant can protect the body by subsiding the aggravated doshas and also indicates the sour taste of it’s fruits. Indian gooseberry is one of the most widely used herb owing to its high medicinal value. It is said to be the best medicinal herb for the treatment of Diabetes. Amalaki have numerous therapeutic properties like immunomodulation, antioxidant, antiulcerogenic, anticarcinogenic, antimicrobial and antiallergic etc. Amalaki can be used in the effective treatment of diseases like Diabetes, Fever, Anaemia, Jaundice, Bleeding disorders, Hiccough, Arthritis etc. Asana (Pterocarpus marsupium) - Ahiphena (Papaver somnifera) - Arjuna (Terminalia arjuna) - Agnimantha (Premna integrifolia) - Agnimantha, is one of the most widely used herb in Ayurvedic treatments. 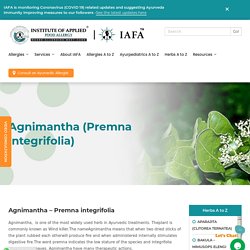 Theplant is commonly known as Wind killer.The nameAgnimantha means that when two dried sticks of the plant rubbed each otherwill produce fire and when administered internally stimulates digestive fire.The word premna indicates the low stature of the species and integrifolia means whole leaves. Agnimantha have many therapeutic actions. Agnimantha is one of the major herbs used in Ayurvedafor antiallergic, antiinflammatory andantimicrobial purposes.

Dr.Gupta’s IAFA has been consistently working on the plant for knowing more medicinal properties of Agnimantha. Wind killer plant can be used as a hypoglycemic , anthelmintic , aphrodisiac, anti-inflammatory, analgesic and antimicrobial agent. Ardraka (Zingiber officinale) - Ardraka commonly known as Ginger, is a perennial herb having root rhizomes as the most useful part. 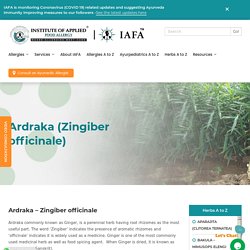 The word ‘Zingiber’ indicates the presence of aromatic rhizomes and ‘officinale’ indicates it is widely used as a medicine. Ginger is one of the most commonly used medicinal herb as well as food spicing agent. When Ginger is dried, it is known as ‘Sunti’(as per Sanskrit). Zingiber officinale or Ardraka is one of the most significant herb in Ayurveda as well as in allopathic science. Ginger have many pharmacological actions like Rubefacient, Stimulant, Carminative, Anti allergic and Anti microbial. AGARU (Aquilariaagallocha) - Agaruis commonly known as Eagle wood. 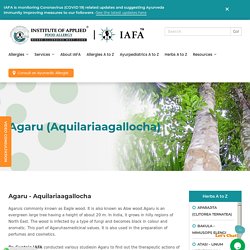 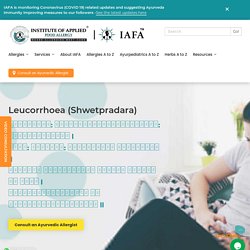 Almost all women experience vaginal discharge. This is a natural function of the body to maintain healthy vagina and flush out harmful microorganisms. The amount of discharge may increase due to the vaginal infectionand it is associated with irritation. In Ayurveda Leucorrhoea is termed as Shwetpradara (Shwet means White and Pradara means discharge from Vagina). Expert Ayurvedic Treatment for Latex Allery l IAFA. सोत्सङ्गैश्चसरागैश्चकण्डूमत्भिश्चमण्डलै: l शैशिर: कफजोव्याधिरुदर्द्दइतिकीर्त्तित: ll Ayurvedic Reference of Udarda(Latex allergy) Causes of Latex Allergy When the body comes in contact with some proteins in rubber latex, immune system misinterprets them as harmful substances and produce antibodies to expel them. 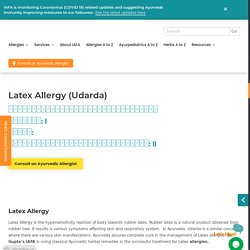 These antibodies initiate secretion of histamines on continuous exposure to latex and results in allergic reactions. Means for causing latex allergy Direct contact with latex or its products like gloves, balloons, condoms etc.Inhalation of latex particles from its products that stay on air. People who have constant or increased contact with latex gloves or other products are more prone to be affected with latex allergy. Ayurvedadescribes exposure to cold wind as the reason for Udarda. Irritable Bowel Syndrome l IAFA. Insect Sting Allergy Treatment l IAFA for Allergy.

आग्नेयैरल्पसंस्रावोदाहरागविसर्पवान् l पक्वपीलुफलप्रख्य: खर्जूरसदृशोअथवाll Ayurvedic Reference of Keetavisha (Insect sting allergy) Causes of Insect Sting Allergy When a person is exposed to an insect sting, antibodies will be produced to fight against the insect venom. 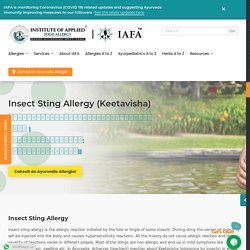 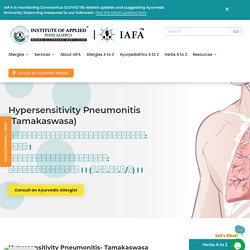 This can cause breathing difficulties and can result in irreversible injury to lung tissue.Hypersensitivity Pneumonitis is caused by breathing ofcertain environmental allergens that lead to allergic reactions in the body. These allergens can be present at home, at workplace, or in surroundings. Animal fur, bird feathers and droppings, pollen and molds are examples of common allergens.In Ayurveda, a similar condition is explained as Tamakaswasa. Gout l IAFA. Gout is sudden, severe onset of burning feet, redness in the joint (and often the joint is base) of the big toe. 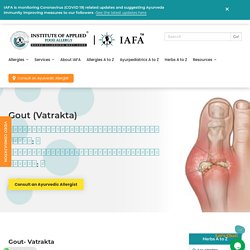 An attack of gout can occur suddenly at midnight while waking up. These attacks can happen over unless it’s get treated, gout can harm joints, tendons and other tissues. Gout is frequently involved lower extremities joints and classic location to occur is base of the big toe. It can also affect the foot, knee, ankle, wrist, hands, and nearly any joints. Fungal Diseases l IAFA. Fungal Diseases Fungal Diseases refer to a group of discomforts caused by fungal infection. 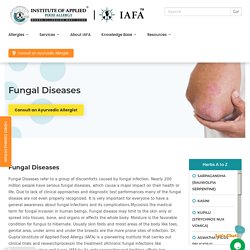 Nearly 200 million people have serious fungal diseases, which cause a major impact on their health or life. Due to lack of clinical approaches and diagnostic test performances many of the fungal disease are not even properly recognized. It is very important for everyone to have a general awareness about fungal infections and its complications.Mycosisis the medical term for fungal invasion in human beings. Fungal disease may limit to the skin only or spread into tissues, bone, and organs or affects the whole body.

Food Protein Induced Enterocolitis l IAFA. उपशेते यदौचित्यादोक सात्म्यं तदुच्यते ||४९|| Food Protein induced Enterocolitis/ Asatmyajarogas Food protein induced enterocolitis is a non IgE-mediated gastrointestinal food allergy that presents with delayed vomiting after ingestion primarily in infants. It is referred to as a delayed food allergy, and is a severe condition causing vomiting and diarrhea. In some cases, symptoms can progress to dehydration and shock brought on by low blood pressure and poor blood circulation.Much like other food allergies, it is triggered by ingesting a particular food. Althoughany food can be a trigger, the most common culprits include milk, soy and grains.

Food Allergy l Ayurvedic Treatment with IAFA. Question: What are the reasons for increasing occurrence of Food Allergy? Answer: Due to inappropriate food combination allergy has increased so rapidly in recent years, significantly in young kids. It can be probably due to changes in life style leading even to genetic changes. Question: Are all food allergies severe? Food Additive Allergy - IAFA. शीतमारुतसंस्पर्शात्प्रदूष्टौकफमारुतौ। पित्तेनसहसंभूयबहिरन्तविसर्पत:॥ Food Additive Allergy - IAFA. Fish Allergy l IAFA. उपशेते यदौचित्यादोक सात्म्यं तदुच्यते ||४९|| (च.सू.६/४९) Fish Allergy Allergies to shellfish and fish are more common in adults and adolescents than in young children. A recent study estimated that one in every 100 people has a seafood allergy.