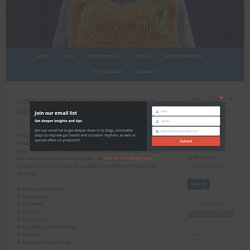 Histamine is a molecule that we all make that’s involved in the nervous and immune systems. Many people know of histamine due to its role in causing the symptoms related to allergies: Itchy eyes and skinHeadachesInsomniaAnxietyRunny noseCoughing and sneezingVertigoNausea and vomiting People with histamine intolerance begin experiencing these symptoms when they eat foods with high levels of histamine or that cause the release of histamine. Taken from: What's The Deal With Food Allergy Testing?

Allergies and the Gut Microbiome. Histamine Intolerance/Sensitivity. Specific Allergies/Food Allergies. Histamine and Chronic Fatigue Syndrome/ME and Fibromyalgia. Exercise and Histame. Histamine Intolerance and Methylation. Salicylate Sensitivity. Dr T C Theoharides, MD Ph.D., - Mast Cells, Autism, Inflammation. Top 19 Antinutrients in Plant Based Foods That Can Cause Inflammation. Haptens: A Root Cause Of Food Intolerance, Chemical Sensitivity, Skin Sensitivity, And Autoimmunity. Haptens may make you create antibodies towards your own self if they bind with your own proteins (theory). 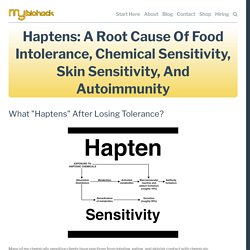 For example, nicotine-based haptens are used to combat addiction by creating anti-nicotine antibodies. R 1. Autoimmunity From Drugs Some haptens can induce autoimmune disease. For example, hydralazine (blood pressure-lowering drug) can occasionally can produce drug-induced lupus erythematosus in certain individuals. This may be the mechanism by which the halothane (anesthetic) can cause life-threatening hepatitis, as well as the mechanism by which penicillin-class drugs cause autoimmune hemolytic anemia. 2. Case reports have shown that the synergistic effect of multiple hapten exposures with stress can to abnormal mucosal immune function and the breakdown in immunological tolerance to dietary proteins and peptides.

All About Histamine H3 Receptors (HRH3/HR3): Genetics, Mechanisms, And Antagonists. H3R antagonists have stimulant and nootropic effects and may improve cognition and memory. 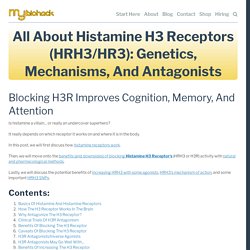 Haptens: A Root Cause Of Food Intolerance, Chemical Sensitivity, Skin Sensitivity, And Autoimmunity — MyBioHack. Food allergy is linked to skin exposure and genetics. How to Resolve Chronic Hives – Audience Question. Food Allergy vs. Food Intolerance: Why the Difference Matters. All too often, when patients claim to react poorly to certain foods but labs don’t show an allergy, their concerns are dismissed and they’re told, “It’s all in your head.” 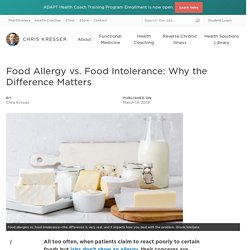 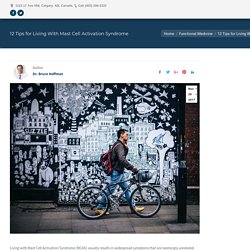 Unfortunately, most people go many years or even their whole life without a diagnosis. If you’ve been diagnosed with MCAS or suspect you have this condition, the best course of action is making a series of lifestyle changes and working with your functional medicine doctor. Fortunately, many of the changes are easy to implement and you’ll see the benefits from implementing them fairly quickly. Try not to get overwhelmed by this list, instead pick one or two items and incorporate them into your routine. Add a few items week by week, and soon enough you’ll have a comprehensive plan that has the potential to significantly improve your symptoms and your quality of life. 1.

Cooling Inflammation: Genetics of Food Intolerance. Food intolerance is based on missing bacteria in the the gut rather than inadequacy of human enzymes, e.g. lactase, or altered immune system. 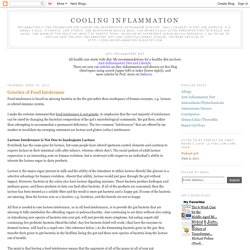 I make the extreme statement that food intolerance is not genetic, to emphasize that the vast majority of intolerance can be cured by changing the bacterial composition of the gut's microbiological community, the gut flora, rather than attempting to accommodate a permanent deficiency. The two common "intolerances" that are offered by my readers to invalidate my sweeping statement are lactose and gluten (celiac) intolerance. Lactose Intolerance is Not Due to Inadequate Lactase Everybody has the same gene for lactase, but some people have altered upstream control elements and continue to express lactase in their intestinal cells after infancy, whereas others don't. Lactose is the major sugar present in milk and the ability of the intestines to utilize lactose directly like glucose is a selective advantage for human evolution.

8 Natural Allergy Relief Remedies. According to the Allergy and Asthma Foundation of America, 1 in 5 people, or an estimated 50 million Americans, suffer from some type of allergies. (1) The chances are high that you or someone you know suffers from allergies, whether seasonal allergies, food allergies or another type . 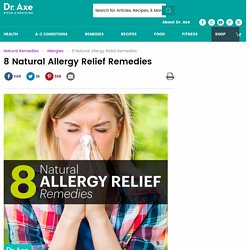 Most people who are struggling with an allergy go to the doctor to be treated and are routinely given pharmaceuticals from acetaminophens to antihistamines, both of which may actually further aggravate the allergy symptoms they were given for. (2) Is it that time of the year again? Time for congested sinuses, headaches, watery or itchy eyes and other signs of allergies? Before you know it allergy season will be upon us again, which means that millions of Americans are going to turn to Benadryl, Claritin and other medications to try and find some relief. Millions of people suffer from allergies. Almost there! Enter your email to download this free guide right now. Don't miss this FREE training. Cooling Inflammation: Mast Cell Heparin. Mast cells are sentinels in tissues. 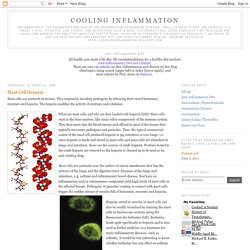 They respond to invading pathogens by releasing their stored histamine, enzymes and heparin. The heparin modifies the activity of enzymes and cytokines. Allergies and Your Genes – Histamine, Autoimmunity and DAO SNPs – Suzy Cohen suggests ways to heal naturally without medication. The other day I was reading an article that discussed histamine as it pertains to allergies to pollen, like sneezing and itchy eyes. 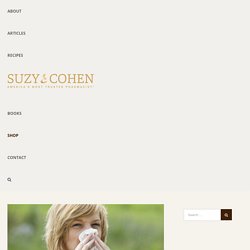 It made me realize that almost everyone assumes histamine causes allergies and nothing else. This is simply not true. Histamine can certainly cause allergies, and it is found in hundreds of foods that you consume daily, but an allergy is different than what I want to share with you today. An allergy causes an almost immediate reaction to the food you just ate, whereas an “intolerance” is a reaction that occurs later. Why later? Histamine is associated with many problems so read on, this could be life-changing information for some of you. 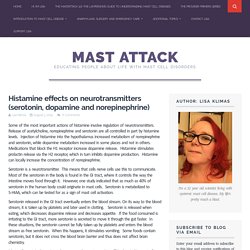 Release of acetylcholine, norepinephrine and serotonin are all controlled in part by histamine levels. Injection of histamine into the hypothalamus increased metabolism of norepinephrine and serotonin, while dopamine metabolism increased in some places and not in others. Medications that block the H1 receptor increase dopamine release. Histamine stimulates prolactin release via the H2 receptor, which in turn inhibits dopamine production. Histamine can locally increase the concentration of norepinephrine.

Serotonin is a neurotransmitter. Serotonin released in the GI tract eventually enters the blood stream. Mast cells contain dopamine, a hormone and neurotransmitter. Mast Cell Activation Syndrome (MCAS): When Histamine Goes Haywire... - Jill Carnahan, MD. Mast cells are present in most tissues throughout the human body, especially connective tissue, skin, intestinal lining cardiovascular system, nervous system, and reproductive organs. They are part of the allergic response designed to protect us from threat and injury. Histamine: Allergies, Brain & Gut Health - Metabolic Healing. If you think that high histamine is only an issue during allergy season, think again.