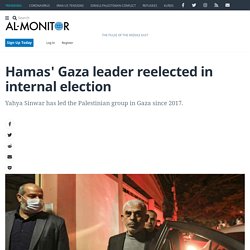 Hamas announces Qatar-brokered deal to avoid escalation with Israel. Hamas announced Monday that, through Qatari mediation, a deal had been reached to avoid an escalation and restore calm along the border with Israel after several weeks of high tensions. 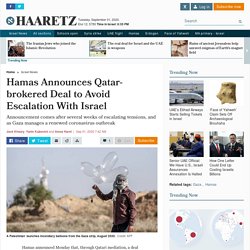 "After a round of talks, mediated by the Qatari representative, Mohammed al-Emadi, an understanding has been reached to avoid an escalation and stabilize the situation. In Gaza, suicides are a political message. Are four suicides in one week in the Gaza Strip – bringing the total to 12 since the beginning of the year – a coincidence or part of a phenomenon? 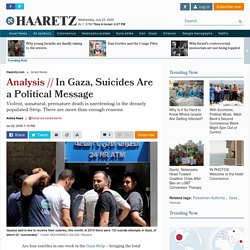 In Gaza this is a political question, and the answers one hears are divided according to party affiliation and the split in Palestinian self-rule. To Hamas, the claim that it’s a phenomenon and that it’s on the increase sounds like vilification by its rivals and ill-wishers, particularly Fatah – an attempt to undeservingly pin the blame on it. Meanwhile Hamas’ critics and opponents, even if they agree that the root of the problem lies with Israel’s military and bureaucratic measures, which have strangled Gaza’s economy and turned the Strip into a huge prison, cut off from the world, nevertheless believe that Hamas, having been in power for 13 years and often boasting of its achievements, shares part of the blame for the fact that young people have lost their taste for life.

Get breaking news and analyses delivered to your inbox Click here. Israeli annexation plan is 'declaration of war': Hamas. GAZA CITY, Palestine Hamas on Thursday said Palestinian resistance groups consider the Israeli plan to annex large areas of the occupied West Bank as a "declaration of war against the Palestinian people. 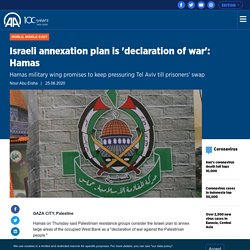 " Abu Obeida, spokesman for the Ezzedine al-Qassam Brigades, the group's military wing, pledged in a video message that they will remain a "loyal guard in defending the Palestinian people and their lands and holy sites. " As July 1, the date announced by Prime Minister Benjamin Netanyahu to declare Israel's sovereignty over the West Bank and Jordan Valley, approaches, the area has entered a state of uncertainty. Netanyahu made the announcement last month following US President Donald Trump’s so-called “Deal of the Century.

" Palestinian officials say that under the US plan, Israel will annex 30-40% of the West Bank, including all of East Jerusalem. Separately, the Hamas spokesperson said reaching a prisoners swap deal with Tel Aviv is among their top priorities. To save himself, Netanyahu is going to war with Gaza. Even as Israel becomes chronically unable to form a government, the ‘Gaza consensus’ — the endless pounding of the strip into oblivion — persists. 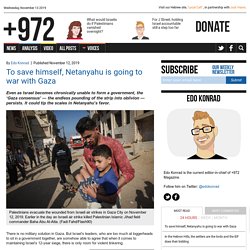 It could tip the scales in Netanyahu’s favor. Palestinians evacuate the wounded from Israeli air strikes in Gaza City on November 12, 2019. Earlier in the day an Israeli air strike killed Palestinian Islamic Jihad field commander Baha Abu Al-Atta. (Fadi Fahd/Flash90) Hamas hails decision of EU court to remove it from world blacklist. The Islamic Palestinian movement, Hamas, hailed on Friday a European court decision to remove it from the world’s terrorist list, a statement confirms. 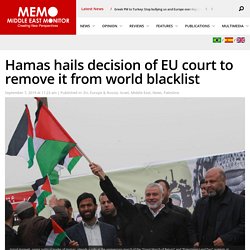 Hamas spokesman, Hazim Qassim, declared in the statement that the decision “is positive and a right step in the right direction.” Qassim added “we hope that this decision will lead to completely remove the name of the movement from any unjust list.” Meanwhile, he insisted that “resisting the Israeli occupation is legal according to the international conventions and laws.” 'We're not leaving': Gaza marks Great March of Return anniversary. Tens of thousands of Palestinians have rallied at the Israel-Gaza fence to mark the first anniversary of the Great March of Return protests, facing off against Israeli tanks and troops massed on the fortified perimeter. 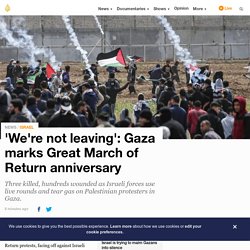 Israeli forces on Saturday used live rounds, rubber bullets and tear gas on the protesters, killing two 17-year-old boys, and wounding at least 207 people, according to Gaza's health ministry. Tamer Aby el-Khair was shot in the chest east of Khan Yunis in southern Gaza and died at the hospital, the ministry said. The second teen, Adham Amara, died after being shot in the face east of Gaza City, the Associated Press news agency reported. A third Palestinian was killed in an overnight demonstration ahead of the main protest. Hamas announces Egyptian-brokered ceasefire with Israel. Hamas, the group that governs the Gaza Strip, said it reached an Egyptian-brokered ceasefire with Israel after an exchange of fire, but explosions in the enclave could still be heard early Tuesday. 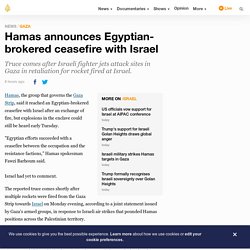 "Egyptian efforts succeeded with a ceasefire between the occupation and the resistance factions," Hamas spokesman Fawzi Barhoum said. Israel had yet to comment. The reported truce comes shortly after multiple rockets were fired from the Gaza Strip towards Israel on Monday evening, according to a joint statement issued by Gaza's armed groups, in response to Israeli air strikes that pounded Hamas positions across the Palestinian territory. Gaza: raid israeliani colpiscono oltre 100 obiettivi Hamas. 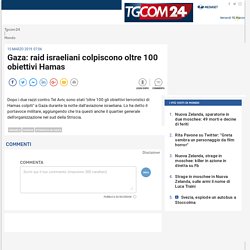 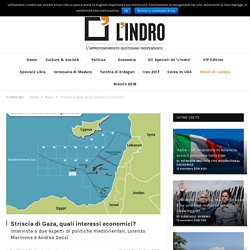 Palestinian officials said at least three people, including two militants, were killed by Israeli fire and nine were wounded, and an Israeli airstrike destroyed the ruling Hamas group’s TV station. In Israel, the national rescue service said at least 20 people were wounded, including a 19-year-old soldier and a 60-year-old woman who were in critical condition. The fighting cast doubt over recent understandings brokered by Egypt and U.N. officials to reduce tensions. Just a day earlier, Israel’s prime minister had defended those understandings, saying he was doing everything possible to avoid another war. The United Nations said it was working with Egypt to broker a halt in the violence. Lt. Sinwar: The wall of Gaza siege started to collapse - وكالة شهاب للأنباء. Ministry of health : 233 Palestinians killed since Great Return March started - وكالة شهاب للأنباء.

Who will save Gaza? The international donor group for Palestine, the Ad Hoc Liaison Committee (AHLC), will meet in New York at the end of September to discuss the rehabilitation of the Gaza Strip. It will be the first such meeting to be attended by Israel’s Coordinator of Government Activities in the Territories (COGAT) Brig. Gen. (res.) Kamil Abu Rukon as well as Minister for Regional Cooperation Tzachi Hanegbi.

It was planned a few months ago as a routine gathering but in light of the American cut in assistance to the UNRWA, it has become an emergency meeting to find financial alternatives. Palestinian reconciliation: Regional and international efforts await Fatah’s approval. The current developments in the Palestinian arena have opened the door for three intersecting trajectories related to the Gaza Strip and reconciliation with the Palestinian Authority — as well as Israel. These trajectories revolve around Palestinian reconciliation with Egyptian support, ending the humanitarian crisis in the Gaza Strip and the issue of Israeli troops captured in Gaza.

Hamas reveals details of Egyptian reconciliation proposal. How Israel and Egypt are coordinating on Gaza. Abbas’ sanctions on Gaza could soon become Israel’s war. The Palestinian Authority’s attempts to destroy Gaza’s economy could end up dragging Israel into military conflict. By Elhanan Miller Palestinian President Mahmud Abbas seen upon his release from a hospital in Ramallah in the West Bank on May 28, 2018. (Flash90) Gaza, soldati israeliani aprono il fuoco sui palestinesi: 4 morti e almeno 525 feriti. Gaza violence calms after overnight air strikes. Gaza's streets were filled with morning shoppers and children went to class, and schools opened as usual in Israeli towns near the border a day after the worst flare-up in violence since the 2014 Gaza war. Late on Tuesday, Islamic Jihad and Hamas said they had agreed to a ceasefire, and vowed to stop firing mortars and rockets if Israel also halted its bombardment of the Gaza Strip. Early on Wednesday, Israel reportedly hit 25 Hamas targets on the Gaza Strip.

Israeli ministers have made contradictory statements about the ceasefire, and the security cabinet is scheduled to convene on Wednesday night to discuss the situation. READ MORE►'Gaza is fed up': Palestinians to send out boats defying siege But there have been no reports of further fighting as both sides appeared to back away from a slide towards a new war after weeks of violence along the border. Israel strikes Gaza after heaviest mortar barrage in years. Image copyright Israeli prime minister's office Israel has attacked militant sites in Gaza after coming under the heaviest barrage of mortar and rocket fire from the Palestinian enclave in years.

The Israeli army said air strikes hit 35 targets, including a cross-border tunnel, belonging to Hamas and Islamic Jihad - Gaza's main militant groups. Gaza protests: All the latest updates. For more than four months, Palestinians in the Gaza Strip have protested along the fence with Israel demanding their right to return to the homes and land their families were expelled from 70 years ago.

The Great March of Return rallies culminated on May 15 to mark what Palestinians refer to as the Nakba, or Catastrophe - a reference to the forced removal of 750,000 Palestinians from their homes and villages to clear the way for Israel's establishment in 1948. The mass Friday demonstrations have since continued. Since the protests began on March 30, Israeli forces have killed at least 166 Palestinians in the besieged coastal enclave and wounded more than 18,000 people, according to health officials in Gaza.

“Gaza has continued on its trajectory of 'de-development', in many cases even faster than we had originally projected,” said Robert Piper, the UN Coordinator for Humanitarian Aid and Development Activities, in a press release on the new report, “Gaza – 10 years later.” Titled. Believing in hope even when it lies. How Gaza's only escape turned deadly. Hamas chief leaves Gaza for Cairo to discuss relations with Egypt.