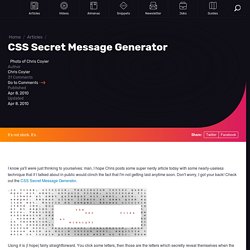 It’s Shutterstock. I know ya'll were just thinking to yourselves: man, I hope Chris posts some super nerdy article today with some nearly-useless technique that if I talked about in public would clinch the fact that I'm not getting laid anytime soon. Don't worry, I got your back! Check out the CSS Secret Message Generator. Using it is (I hope) fairly straightforward. There are a few interesting things worth touching on, so we'll do that in this article. #The Big Idea In our example we wrap every single letter of a big block of text in a <span>.

For the record, there is really not reason it's laid out in a grid, other than it's just kinda easier to click the letters and it looks more secret-message-y. #jQuery Like about everything fancy we do around here, it uses jQuery. I've done a couple of other grid-clicky things in the past and one thing I've always wanted to figure out (but never could) was a click-and-drag way to toggle cells. The Teacher's Room. 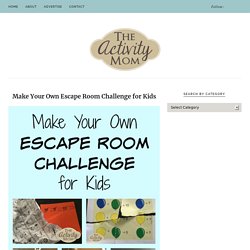 I decided to make one at home for my kids to try and it was so much fun. Here’s how to make your own escape room challenge for kids: First, I bought a lock that needs 4 numerals to unlock it and it can be reset to a new combination over and over again. Another idea would be to use a lock with a key and have one of your clues give a hint about where the key is hidden. Then, I made and printed different clues and puzzles for the kids to solve. Instead of an escape room, we decided to lock up dessert. I hid all of the clues in the same room (the dining room) so they were “locked” in that room to figure it all out. The first clue I made (easy to solve) is using half of an empty paper towel tube, a piece of cardstock, and tape.

Wrap a piece of cardstock around the tube and tape it, but make sure it is loose enough to turn.Once it is taped, slide it off the tube and cut it into 6 pieces.Slide them back onto the tube and draw your clue. Escape Room Puzzle Ideas for the Science Classroom. Creating an engaging escape room experience for your middle school science students doesn’t have to be difficult. Set your escape rooms apart from the other by weaving a narrative throughout the activity. Students will become invested in the story and the artifacts and puzzles will be more meaningful to them. ANSWER - Forward Junction Puzzles. Can you crack the code from the below given clues in the image ? 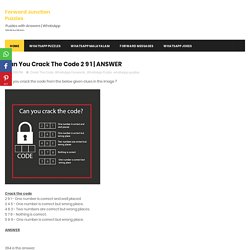 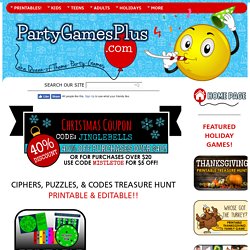 Our hunt features ciphers, puzzles, codes, trivia and fun! This treasure hunt comes in an editable PDF file available for instant download. 13 Escape Room Cipher Ideas That Encode Your Game With Mystery & Madness. Once you've got your message it's dead easy to slip it into your escape room. 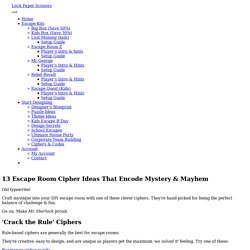 Simply put both the ciphertext and shift in plain sight. This works great because both are meaningless until combined. Take it to the next level by using something else to represent the shift like: Circling the number 2 on the clock in your living room.Write the ciphertext on a piece of paper cut into a triangle.Put the message in an envelope and make the house address the shift (go over it a few times to highlight it).

Two great mods of the Caeser Cipher are the AtBash Code where you reverse the alphabet (so A=Z, B=Y, C=X etc...) or replacing each letter with a number (A=1, B=2, C=3 etc...). Whatever you choose you've probably worked out that players could actually just brute force hack a Caesar cipher using trial and error. DIY Decoder & Cipher templates. Looking for secret codes for kids? These 8 fun Codes & ciphers are perfect for kids and are one of my favorite printables! There are 8 different codes as well as matching ciphers to help your Spy crack the code. All the hard work has already been done for you.

Secret Decoder. Secret Agent Birthday Party Invitations. DIY Decoder & Cipher templates. Inventwithpython. Pigpen Cipher - Crypto Corner. The Pigpen Cipher is another example of a substitution cipher, but rather than replacing each letter with another letter, the letters are replaced by symbols. 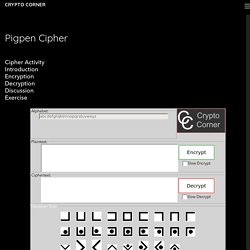 The cipher has an interesting history: although its true origins are unknown, it has been used by many groups. Most notoriously, it was the cipher of choice for use by the Freemasons, a secret society in the 18th Century. In fact, they used it so much, that it is often referred to as the Freemasons Cipher. However, it was not exclusively used by them, with Union prisoners in Confederate camps using it to communicate in the American Civil War. EncryptionThe encryption process is fairly straightforward, replacing each occurence of a letter with the designated symbol. Pigpen Cipher Font. Morse Font. ROT13 to text: ROT13 encoder and decoder — Cryptii. Untitled. Untitled. Braille Mail - Break the Code Worksheets. Decoder glasses. Secret Messages and Secret Codes for Kids. DIY Secret Decoder Cards: Made By Marzipan. Make invites or Valentines super special with a secret message and decoder glasses. 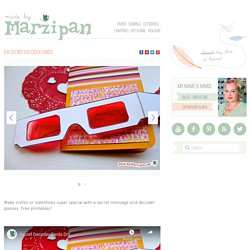 Free printables! How to: In order for this to work properly, you must print on the same sheet of paper twice. Begin by printing the free Decoder Background page (click here). Next choose which secret message you’d like to print. Be mine, valentine (click here)