Messy Nessy Chic. Your Source for Emulation! Painters-colic.com. NitroRoms - The Largest Supplier of Roms in the World. How to Make Cinemagraphs — Still Photos that Move Like Movies. Yup, that picture moves. 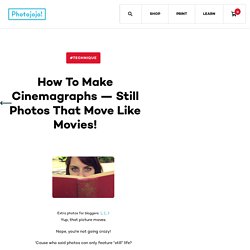 Nope, you’re not going crazy! ‘Cause who said photos can only feature “still” life? Inspired by the moving pictures created by photographer and motion designer duo Jamie Beck and Kevin Burg, we set out to make the magic happen. Make your pictures move like ours did with a some Photoshop magic! Make DIY Moving Photos! What Makes ‘Em Move? Photos can show movement when made into GIFs. GIFs stand for Graphics Interchange Format, and it’s a bitmap image format that supports animation. This magical movement hit the world wide web in the late eighties, so it’s nothing new. Then came along Jamie Beck and Kevin Burg.

So celebrate the smooth comeback of GIFs by making your own photos join the movement! List of Ingredients: A camera that can shoot videoA tripodIdeas for scenes to make into a cinemagraph! STEP 1: Scheming your Scene First, plan out a scene you would like to record. For your first round of cinemagraphs, try to keep it simple. Some helpful hints & tips: Share Spotify Playlists at ShareMyPlaylists.com. Emuparadise - N64 Playstation Dreamcast SNES Genesis NES MAME ROMs ISOs. Akinator, the Web Genius. 37 Ways to Tie a Scarf. Hello there! 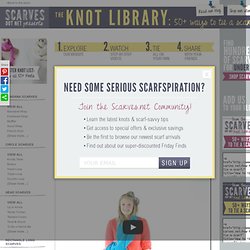 Welcome to The Knot Library. Are you ready to knot, twist, tie, tuck, loop, braid, fold, and fluff with Scarves Dot Net? We compiled over 50 (and counting!) Different ways to tie a scarf, so chances are we have a new knot or two for you! How to Use Scarves.net How does The Knot Library work, you ask? On the left-hand side of your screen, simply find the type of scarf you want to learn more about. If you would like to see all of Scarves Dot Net’s knots in one spot, check out The Master List. Need more help? Idée Labs. Be Creative. TinEye Reverse Image Search.

How To Access THE HIDDEN WIKI (Deep web, secret Internet) (Some of this was copied from BB.com, I'm just bringing it to TBN) For those who don't know, the deep web represents a gargantuan part of the internet which is not accessible through regular searches via google or other search engines. 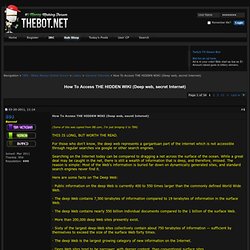 Searching on the Internet today can be compared to dragging a net across the surface of the ocean. While a great deal may be caught in the net, there is still a wealth of information that is deep, and therefore, missed. The reason is simple: Most of the Web's information is buried far down on dynamically generated sites, and standard search engines never find it. Here are some facts on The Deep Web: · Public information on the deep Web is currently 400 to 550 times larger than the commonly defined World Wide Web. · The deep Web contains 7,500 terabytes of information compared to 19 terabytes of information in the surface Web. TheFWA. One Cool Thing a Day - Today. Ana Somnia - lights out! AIDES - Sexy Fingers.