How to Make Cinemagraphs — Still Photos that Move Like Movies! 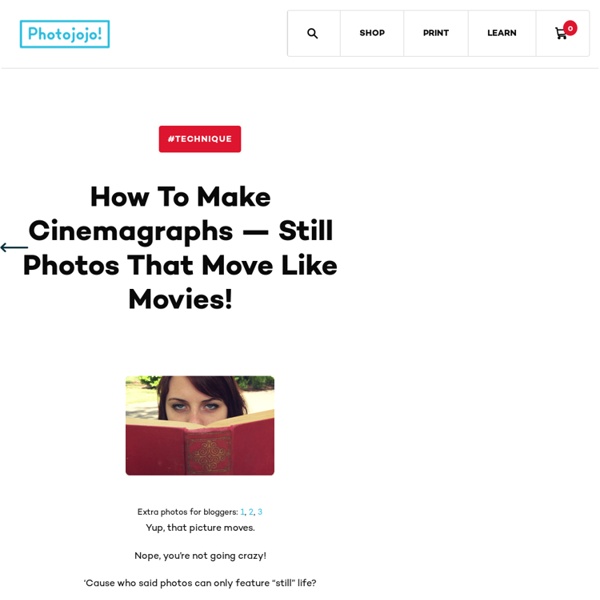 Yup, that picture moves. Nope, you’re not going crazy! ‘Cause who said photos can only feature “still” life? Inspired by the moving pictures created by photographer and motion designer duo Jamie Beck and Kevin Burg, we set out to make the magic happen. Make your pictures move like ours did with a some Photoshop magic! Make DIY Moving Photos! What Makes ‘Em Move? Photos can show movement when made into GIFs. GIFs stand for Graphics Interchange Format, and it’s a bitmap image format that supports animation. This magical movement hit the world wide web in the late eighties, so it’s nothing new. Then came along Jamie Beck and Kevin Burg. So celebrate the smooth comeback of GIFs by making your own photos join the movement! List of Ingredients: A camera that can shoot videoA tripodIdeas for scenes to make into a cinemagraph! STEP 1: Scheming your Scene First, plan out a scene you would like to record. For your first round of cinemagraphs, try to keep it simple. Some helpful hints & tips: Huzzah!

War on Drugs On May 13, 2009, Gil Kerlikowske—the current Director of the Office of National Drug Control Policy (ONDCP)—signaled that the Obama administration did not plan to significantly alter drug enforcement policy, but also that the administration would not use the term "War on Drugs", because Kerlikowske considers the term to be "counter-productive".[11] ONDCP's view is that "drug addiction is a disease that can be successfully prevented and treated... making drugs more available will make it harder to keep our communities healthy and safe."[12] One of the alternatives that Kerlikowske has showcased is the drug policy of Sweden, which seeks to balance public health concerns with opposition to drug legalization. The prevalence rates for cocaine use in Sweden are barely one-fifth of those in European countries such as the United Kingdom and Spain.[citation needed] In June 2011, a self-appointed Global Commission on Drug Policy released a critical report on the War on Drugs, declaring:

Photoshop for Chromebook – About Chromebook It’s a ridiculously powerful application, and you can pretty much guarantee that every movie poster and celebrity photo shoot has been through it at some point. However, if you’re just looking to crop your photos or create a poster for the school play, there are some great tools that work just as well. Chrome OS itself It’s not obvious, but Chrome OS has some simple image editing tools built in. Just head into the Files app, click on your image, then click the pencil icon to flick into editing mode where you can auto-fix colour, crop, adjust brightness and rotate your image.

Venezuela. Surroundings of Angel Falls In May of 2011 Dima Moiseenko left for Venezuela to shoot the highest waterfall in the world — the Angel Falls. The shooting took two days and was very complicated both in its technical aspect and because of the weather. Dima shot the Angel Falls itself, a few neighboring waterfalls in tepuys and spheres over the gold mines on his way back. Now we represent the first part of the shooting — a virtual tour in Venezuela over the Angel Falls' surroundings, the Churun-meru (Dragon) and Cortina Falls as well as over the gold mines.

It Almost Happened Here The Great Depression of the 1930s was very much a worldwide phenomenon, with many developed nations suffering staggering economic downturns. This, in turn, led to massive social unrest. While many countries opted to restore order in whatever way they could, three notables established fascist governments: Spain, under Francisco Franco following a brutal civil war; Italy, under Benito Mussolini; and Germany, under Adolf Hitler. Fascist uprisings, however, did not only occur in those countries. In France, the Action Française, originally a monarchist movement formed in 1898, restyled itself a fascist organization and supported Italy and Spain.

22 pro grime production tricks It may have its roots in East London, but grime is now a truly international sound. MusicRadar celebrates its success by offering 22 tips for anyone who wants to produce in the genre. 1. Although grime draws its influences from both UK garage and US hip-hop, it's got a sound that's far removed from either of these genres. Grime beats, as popularised by the likes of Roll Deep Crew's Wiley, stay away from the conventions of four to the floor and two-step garage. Try starting with a regular two-step rhythm, then add more kicks and change the position of the second snare – this gives grime its characteristic disjointed feel. About Cinemagraphs The History of Cinemagraphs A Cinemagraph is an image that contains within itself a living moment that allows a glimpse of time to be experienced and preserved endlessly. Visual Graphics Artist Kevin Burg began experimenting with the .gif format in this style in 2009 but it wasn't until he partnered with photographer Jamie Beck to cover NYFW that Cinemagraphs were born. Marrying original content photography with the desire to communicate more to the viewer birthed the cinemagraph process. Starting in-camera, the artists take a traditional photograph and combine a living moment into the image through the isolated animation of multiple frames.

Creating The Illusion Of A Different Body Copyright © 2011 NPR. For personal, noncommercial use only. See Terms of Use. For other uses, prior permission required. How to ... / Grants and funding / Supporting material / Artist statements They are as varied and diverse as the art they support, so the following suggestions are intended as guidelines and observations rather than hard and fast rules. Artist statements act as an introduction to your practice as a whole, highlighting common concerns, motivations and processes running throughout. A longer statement may go into more detail about specific works.

The Define School Our Community DEFINE offers photographers the opportunity to refine their skills while living in any area of the world with any type of daily schedule! Due to this our community is truly a melting pot of artists representing every continent (yes, even Antarctica!). Click here to learn more.

Google Plus – Read the Fine Print BEFORE You Sign Up Copyright Scott Bourne 2002 - All Rights Reserved Here’s an update to this post – written to help settle the confusion caused by trolls mischaracterizing what I said. Please read my words – not what the trolls say I said – and judge for yourself. Thanks. Google is the company that started out with a simple mission – don’t be evil. I think they meant it when they started. This Recipe Will Easily Clear Your Lungs In 3 Days, Even If You Smoke More Than 5 Years Smoking kills. It’s the second most preventable killer. Nowadays it’s even written on the pack! Health officials have known that more than 1 billion people around the world smoke and 5 million people die each year from tobacco-related illness, according to the World Health Organization. Video for Photographers—Getting Started We’re exited to partner with Adobe to help you learn more about video. We’re building this learning center so you can get quick access to the information you need. Working with video is fun and a business opportunity. We want to get you up and running for both the shooting and editing.

40 Google+ Tips and Tricks for Power Users July 27, 2011, 8:24 AM — Google+ is all the rage right now. Even under its limited-invite "field trial" phase, the social sharing service is growing in leaps and bounds, with oodles of new users joining every day and even more champing at the bit to get in. Most of us, however, are only beginning to scratch the surface of what Google+ can do; like many Google products, G+ is brimming with advanced features and untapped tweaks. That's why I decided to put together this massive list of Google+ tips and tricks. It includes some of the best power-user pointers I've found both from my own experimentation and from following some really smart folks in the Google+ universe.