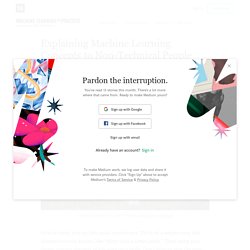 Think of a simple song that almost everyone knows, like “Mary Had a Little Lamb.” Then using your finger, tap out the beat of the song on a table. Don’t hum or sing the tune - just tap out the rhythm while the song plays in your head. What do you think are the odds that your friend can guess the tune you’re tapping? In Harvard Business Review, Chip and Dan Heath write about a 1990 Stanford experiment by Elizabeth Newton involving a similar game. Over the course of Newton’s experiment, 120 songs were tapped out. Using Machine Learning to Improve Streaming Quality at Netflix. By Chaitanya Ekanadham. 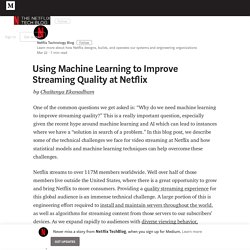 The current state of machine intelligence 3.0. This article was written by Shivon Zilis and James Cham. 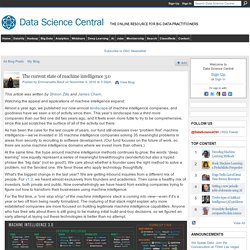 Watching the appeal and applications of machine intelligence expand: Almost a year ago, we published our now-annual landscape of machine intelligence companies, and goodness have we seen a lot of activity since then. This year’s landscape has a third more companies than our first one did two years ago, and it feels even more futile to try to be comprehensive, since this just scratches the surface of all of the activity out there.

As has been the case for the last couple of years, our fund still obsesses over “problem first” machine intelligence—we’ve invested in 35 machine intelligence companies solving 35 meaningful problems in areas from security to recruiting to software development. AI Learns to Read Sentiment Without Being Trained to Do So. In Brief OpenAI researchers were surprised to discover that a neural network trained to predict the next character in texts from Amazon reviews taught itself to analyze sentiment. 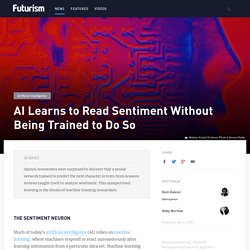 This unsupervised learning is the dream of machine learning researchers. The Sentiment Neuron Much of today’s artificial intelligence (AI) relies on machine learning: where machines respond or react autonomously after learning information from a particular data set. Machine learning algorithms, in a sense, predict outcomes using previously established values.

“We were very surprised that our model learned an interpretable feature, and that simply predicting the next character in Amazon reviews resulted in discovering the concept of sentiment,” OpenAI, a non-profit AI research company whose investors include Elon Musk, Peter Thiel, and Sam Altman, explained on their blog. Explained: Neural networks. In the past 10 years, the best-performing artificial-intelligence systems — such as the speech recognizers on smartphones or Google’s latest automatic translator — have resulted from a technique called “deep learning.” 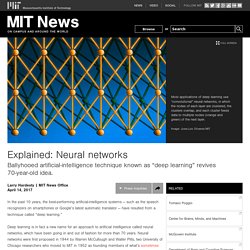 Deep learning is in fact a new name for an approach to artificial intelligence called neural networks, which have been going in and out of fashion for more than 70 years. Neural networks were first proposed in 1944 by Warren McCullough and Walter Pitts, two University of Chicago researchers who moved to MIT in 1952 as founding members of what’s sometimes called the first cognitive science department. Neural nets were a major area of research in both neuroscience and computer science until 1969, when, according to computer science lore, they were killed off by the MIT mathematicians Marvin Minsky and Seymour Papert, who a year later would become co-directors of the new MIT Artificial Intelligence Laboratory. Weighty matters Minds and machines Periodicity. How Machine Learning Is Helping Morgan Stanley Better Understand Client Needs.

Executive Summary Systems that provide automated investment advice from financial firms have been referred to as “robo-advisers.” 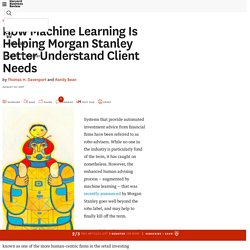 However, the enhanced human advising process — augmented by machine learning — that was recently announced by Morgan Stanley goes well beyond the robo label, and may help to finally kill off the term. The “next best action” system at Morgan Stanley is focused on three separate objectives — only one of which is common in the robo-adviser market. It includes providing operational alerts, as well as content on life events. If, for example, a client had a child with a certain illness, the system could recommend the best local hospitals, schools, and financial strategies for dealing with the illness.

Systems that provide automated investment advice from financial firms have been referred to as robo-advisers. WTF is machine learning? While the number of headlines about machine learning might lead one to think that we just discovered something profoundly new, the reality is that the technology is nearly as old as computing. 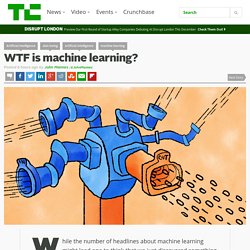 It’s no coincidence that Alan Turing, one of the most influential computer scientists of all time, started his 1950 treatise on computing with the question “Can machines think?” From our science fiction to our research labs, we have long questioned whether the creation of artificial versions of ourselves will somehow help us uncover the origin of our own consciousness, and more broadly, our role on earth. Unfortunately, the learning curve on AI is really damn steep. By tracing a bit of history, we should hopefully be able to get to the bottom of wtf machine learning really is. If my big-data is big enough can I create intelligence? Our first attempts at replicating ourselves involved jamming machines full of information and hoping for the best. It’s ok, even AI researchers are confused by this stuff. Part 5/5 of Machine Learning: An In-Depth Guide. Articles Introduction Welcome to the fifth and final article in a five-part series about machine learning. 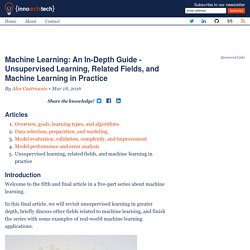 The two most commonly used techniques in unsupervised learning are principal component analysis (PCA) and clustering. PCA produces a low-dimensional representation of a dataset by finding a sequence of linear combinations of the variables that have maximal variance, and are mutually uncorrelated. PCA is also used for exploratory data analysis and data visualization.